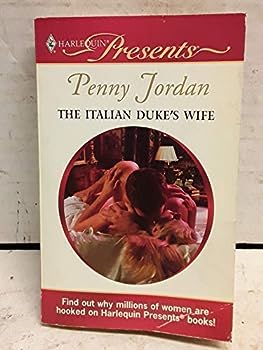 (Book #5 in the By Royal Command Series)

This description may be from another edition of this product. The Italian Duke's Wife by Penny Jordan released on Mar 28, 2006 is available now for purchase.

Published by Thriftbooks.com User , 15 years ago
No one writes a sexy alpha male beter than Penny Jordan. Somehow she can make you love him, hate, and want to bed him all at once. This book was no exception. I've been reading her books for years and I have yet to be disappointed. Looking forward to her next one.

Published by Thriftbooks.com User , 15 years ago
FROM THE BACK COVER: "I will pay you one million pounds to become my wife for one year. The marriage will not be consummated..." Italian aristocrat Lorenzo, Duce di Montesavro, needs to marry, and English tourist Jodie Oliver seems the ideal candidate for this convenient arrangement--her vulnerability is especially appealing to Lorenzo. But when he unleashes a desire Jodie never knew she possessed, Lorenzo is soon regretting his no-consummation rule.... After his scheming cousin-in-law, Caterina, tricks his grandmother into changing her will so that Lorenzo would have to marry her in order to inherit his family Castillo, (unknown to Caterina, the notary changed the will a little so that it didn't say Lorenzo had to marry her, he could marry anyone), Lorenzo dicided to marry the first suitable female he comes a cross. While leaving the Castillo late at night, he meets Jodie, who is hopelessly lost, driving up the road that leads to his Castillo, he dicides that she will suit his needs just fine. He brings her to the Castillo and convinces her to marry him, she agrees after he agree to do her a favor. After her bestfriend, Louise, stole her fiance, John, Jodie decides to go on her honeymoon to Italy alone to get away. She's understandably hurt, confused, and upset. Aside from what John and Louise did to her, she's also recovering from a car accident, from which she sustained wounds that are both physical and mental, including a slight limp which she's very self-conscious about. Lorenzo is very patient with Jodie, and do not make her feel badly about her limp, the way her fiance did. Although he is strongly attracted to her, he does not rush her into bed because she's a virgin. He really cares about underprivileged people, and I especally like the way he told off Louise when they attended her wedding reception. I really like this book because both Lorenzo and Jodie rescued each other, figuratively speaking. I think you will like it as well.

not hot, but HOT

Published by Thriftbooks.com User , 15 years ago
Penny Jordan makes this an entertaining and quick read. Outline - she gets dumped when her friend steals the fiance more than a month before the wedding. Jodie heads to Italy as the honeymoon is already paid for. She's a hunk of burnin' love who meets an Italian hunk of burnin' love. She is shy, Lorenzo tries to hold back - and after 4 tries that fail due to her or due to him, they become a united hunk of burnin' love.
Copyright © 2020 Thriftbooks.com Terms of Use | Privacy Policy | Do Not Sell My Personal Information | Accessibility Statement
ThriftBooks® and the ThriftBooks® logo are registered trademarks of Thrift Books Global, LLC