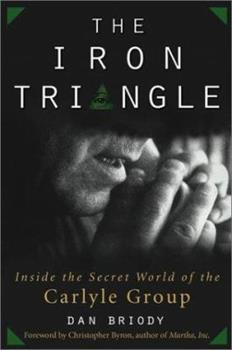 The Iron Triangle: Inside the Secret World of the Carlyle Group

A penetrating look at the company at the nexus of big business, government, and defense The Carlyle Group is one of the largest private equity firms in the world with over $13 billion in funds. Carlyle's investments include everything from defense contractors to telecommunications and aerospace companies. But there is more to this company than meets the eye. Carlyle's executives include heavyweights from the worlds of business and politics, such as...

Captains and the Kings

Published by Thriftbooks.com User , 17 years ago
Taylor Caldwell described this kind of thing fictionally in her novel, Captains and the Kings, but her story deals with Gilded Era robber barons whose machinations, though plenty effective in their time, seem juvenile when compared to what is going on at Carlyle today. Those of us who cling to a belief in America as our faith suffer most, I believe, from the documentation of this level of corruption in our midst. Those who are not politically active, or who will not see the evidence before their eyes, might simply state that Washington is corrupt, always has been, and there's nothing we can do about it. Well, all of these presumptions are untrue: when this level of corruption arose within the Grant, Garfield, and Nixon administrations, action was taken to correct the problem. Of course, the first two events occurred prior to the 17th Amendment, the beginning of our demise. When Theodore Roosevelt came along he socked it to these kinds of guys, but good, and bought us 50 or 60 years of relatively effective government. Dan Briody has written a well-researched, well-documented account of incalculable greed and corruption run amok. In an earlier time, the publication of a book like this would have set off a maelstrom of investigations and indictments. Why is it that our current administration and the Carlyle Group feel immune from censure or prosecution? Repeat after me: Repeal the 17th Amendment Reinstate the Fairness Doctrine Enforce Sherman Anti-trust

A facinating look at a scary direction in American business

Published by Thriftbooks.com User , 19 years ago
The intersection of politics and business is quite apparent with the current Bush administration, but this book takes us deep into the dangers inherent in such a close alignment of the public and private sectors. The scariest part of this book is not that fact that the type of political favors and influence peddling described occur, but that there is little oversight in the government or media to prevent or expose it.I'd highly recommend this book to anyone who is concerned about the influence of business on government policy, especially with the current global political climate.

Lessons To Be Learned

Published by Thriftbooks.com User , 19 years ago
Remarkable and readable! Most US citizens assume the integrity of key government leaders. But Dan Briody dispells that naivete exposing a surely shameful, probably unethical and perhaps illegal chain of "deals", both intriguing and discomforting -- and all involving the secretive Carlyle Group. The lessons learned through his conscientious examination of the facts will have a significant effect on how this reader views the 2004 elections.

Published by Thriftbooks.com User , 19 years ago
If a Ludlum novel had a CIA hitman, the father of the president and the world's biggest terrorist's brother sitting down together at a company meeting while the Trade Center was being bombed; and then went on to disclose that the company had invested in companies that specialize in anthrax clean-up, airport security devices, and defense equiptment - it would be considered far fetched. This brave book says it is real. It is Bush, Baker, Carlucci, Levitt and bin-Laden in the scariest book in print.

A hard look at Carlyle

Published by Thriftbooks.com User , 19 years ago
It's about time someone took a hard look at this revolving door company. The book lays out in detail why a company like this subverts democracy, and how the rich get richer. Some of this stuff you won't believe, like how brazen these guys can be...
Trustpilot
Copyright © 2022 Thriftbooks.com Terms of Use | Privacy Policy | Do Not Sell My Personal Information | Accessibility Statement
ThriftBooks® and the ThriftBooks® logo are registered trademarks of Thrift Books Global, LLC