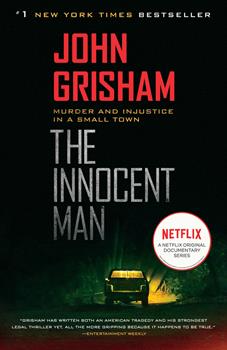 The Innocent Man: Murder and Injustice in a Small Town

#1 NEW YORK TIMES BESTSELLER - John Grisham's first work of nonfiction: a true crime story that will terrify anyone who believes in the presumption of innocence. LOOK FOR THE NETFLIX ORIGINAL DOCUMENTARY SERIES "Both an American tragedy and [Grisham's] strongest legal thriller yet, all the more gripping because it happens to be true."--Entertainment Weekly In the town of Ada, Oklahoma, Ron Williamson was going to be the next Mickey Mantle. But on...

Published by KarenAnn , 9 months ago
I believe this was the only true story written by John Grisham, this is a tough book because its so emotional.

Tragic story in a small town.

Published by Rblunt , 3 years ago
This book really made me question my beliefs regarding the death penalty in the United States. A fantastic story about a hometown boy who’s life took a turn in the wrong direction by being unable to capitalize on his god given baseball talent.

One Of My Favorite Authors

Published by Nan , 3 years ago
Was glad to find this John Grisham book, in your list of true crimes...he is one of my favorite authors, have read almost all most all isi fiction and nonfiction.

Published by Thriftbooks.com User , 15 years ago
The phrase "Grisham book" and word "important" aren't often found in the same sentence, but John Grisham's 2006 non-fiction book, "The Innocent Man", allows me to state that Grisham has now written the most important book of his mega-successful career, and one of the most important I've read by any author. The book recounts two murders in the small town of Ada, Oklahoma. Both victims are young women. In both cases, the local and state police investigating the case are stumped. But with a toxic blend of extremely circumstantial "evidence", shocking crime scene photos, junk science, inexpert experts, jailhouse snitches and critical "dream confessions" induced by near-torture tactics, the police pin the murders on four young men of the area, two per murder. The "innocent man" of the title is 30-something ne'er-do-well Ron Williamson, a schoolboy baseball star whose dreams of playing in Yankee Stadium dissolve in the low minors in a mix of arm injuries, booze and the onset of mental illness. By the time of the murder that consumes most of Grisham's tale, Williamson has washed up back home in Ada, and deservedly earned a reputation as a loudmouth loose cannon of sorts. Still his worst crime is passing a $300 phony check. Skipping forward quickly, Williamson becomes the focus of the police's investigation and ultimately finds himself on death row in an Oklahoma criminal justice system whose aim seems to be to continuously reduce the amount of respect shown to death row inmates until it reaches zero. Shrewd detectives that they are, the police "know" that there's a second killer because of a misspelled warning message written in catsup at the scene, "dont chase us or ealse." Enter suspect two, single father Dennis Fritz, whose main crime is to be a friend of Williamson. I'll stop here regarding the "plot", even though this is a news story and you could look it up. While novelistic in format, "The Innocent Man" reads more like a newspaper report, or like a lawyer dispassionately recounting the facts of a case. (Well after awhile not so dispassionately, as the injustices against the accused and then convicted men pile up.) The issues raised by the case and brought to light by Grisham cover the gamut of criminal justice - abuse of police power, single-minded focus on particular suspects and deliberate ignorance of others, near-torture-induced confessions, prosecutorial arrogance, lack of resources provided to defendants, mishandling of evidence, coercion of expert witnesses, use of junk science to dazzle a jury, the general and mistaken belief by the community that the police only arrest guilty parties, and most compellingly in Williamson's case, the inability of the criminal justice system to recognize and deal humanely with mentally ill prisoners. My wife read the almost 450-page paperback version in one day. She then bugged me to read it for several days until I interrupted my second attempt at Barbara Kingsolver's Prodigal Summer: A Nov

Published by Thriftbooks.com User , 16 years ago
To be honest, I had grown tired of John Grishom's books. They seemed to all have the same plot after a while. But this book...WOW. I was very impressed. What a scary thing to think that this goes on in our judicial systems, however, I have seen first hand that it does happen, everyday in our court systems. While some may feel that they were weighed down in too many facts, most true crime stories do this, but I didn't find it to be boring in the least. It was a great book, one of his best.

Published by Thriftbooks.com User , 16 years ago
Justice sometimes get to be a commodity, rationed not by need but by wealth. This dirty secret is something all lawyers, including myself, know. The justice system itself is designed to protect the truly innocent even at the cost of protecting the guilty. Thus a lot of safeguards are built into the system because experience has shown that once an injustice is done, it is very difficult to undo it. Criminal lawyers, and although I am a trial lawyer I practice solely in the civil courts, will tell you that their greatest nightmare is to represent the truly innocent client. This is because although the law presumes the client is innocent, trial counsel, jaded by thousands of lies from clients, does not. If your lawyer does not truly believe in you, and you are truly innocent, can you get a fair trial? The answer to this question is explored in what may be the best true-crime work since In Cold Blood. Ron Williamson, former minor league prospect, now burdened with incurable mental illness is targeted by the police and prosecutors in Ada, Oklahoma as the killer of Debbie Carter. Another man Dennis Fritz, whose real crime was to be a friend to Ron, is also targeted. When the police fail to turn up a killer in nearly five years of investigation and an author puts the spotlight on the local police for a highly questionable conviction in another murder case, the cops and prosecutors press forward against Fritz and Williamson, using perjured evidence, discredited forensics, high emotion, and active concealment of exculpatory evidence. The trial judge tolerated the abuse of the defendants constitutional rights to the point of scheduling a Brady motion ( a hearing to punish the state for not turning over exculpatory evidence) after the trial, when it could do no good. The appellate courts, perhaps overwhelmed with appeals from the truly guilty, showed little evidence of ever having read the record. So it came down to the federal courts for the system to correct itself. A federal magistrate judge carefully considered the briefs, and the trial record and was persuaded that Williamson had been denied a fair trial. The district judge, exercising the same degree of care as his magistrate and law clerks concurred, ordering the state to retry Williamson, who at one point was five days away from a date with death. It was that order for a new trial that set into motion the events that would lead to the total exoneration of Williamson and Fritz. When the DNA results were provided, they not only showed that Williamson and Fritz were not involved and also that the chief prosecution witness against them was in fact the real killer.

Not a true John Grisham Fan

Published by Thriftbooks.com User , 16 years ago
John Grisham fans may regard this book with suspicion. It is not his usual gripping fiction. I will admit that I have read very few of his books because I am more interested in nonfiction; although I did read A Painted House and I loved it. However, this book is captivating. I was fascinated and couldn't put it down. Some true crime books predictably describe the crime and then in agonizing detail relay what happened during the trial, including transcripts of opening and closing arguments (which I usually skip through.) Grisham only includes information that is meaningful and allows the story to flow. I found it almost painful to follow every development of the evidence because I knew the significance and I was so sympathetic to the main character. I also enjoyed his occasional sarcastic comments here and there, which provided some amusement and levity. I think that if one enjoys the true crime genre, and respects John Grisham's writing talent, this book is absolutely worth the read. I recommend it whole-heartedly. I was disappointed when I watched his interview on the Today show and he said he would likely never write non-fiction again.
Trustpilot
Copyright © 2022 Thriftbooks.com Terms of Use | Privacy Policy | Do Not Sell My Personal Information | Cookie Preferences | Accessibility Statement
ThriftBooks® and the ThriftBooks® logo are registered trademarks of Thrift Books Global, LLC