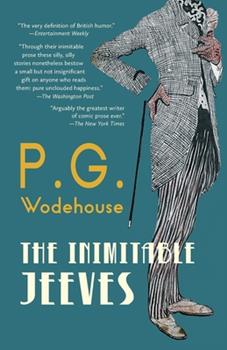 (Part of the Jeeves (#2) Series and The Drones Club Series)

With their first appearance in 1915, Bertie Wooster and his highly competent valet Jeeves were destined to become Wodehouse's most famous duo. The hilarious stories that feature the charmingly foppish Bertie and his equally lightheaded friends being rescued from tedious social obligations, annoying relatives, scrapes with the law, and romantic problems by the quiet interventions of Jeeves are among Wodehouse's best-loved tales.This Warbler Classics...

Best of the Best

Published by Thriftbooks.com User , 16 years ago
Were you to read only one Wodehouse book (God forbid) which one might it be? I would suggest this one, although there are numerous contenders from the Jeeves, Drones, golf, Mr. Mulliner and Blandings stories, not to mention the one-offs and great unknowns. Although this book has what might be called an overarching narrative, being that all the tales are told in the first person by one Bertie Wooster, the chapters nevertheless neatly fall out as short stories even if with somewhat "cliffhanger" endings, which is to say they don't resolve. That almost perfect format will delight both short story fans and afficianados of the novel, and also spun off some of the best TV yarns in the Jeeves and Wooster and World of Wodehouse TV series. My British edition (for copyright reasons not for sale in the U.S.) shows a cover photo op of Ian Carmichael as Wooster in the BBC series "The World of Wooster". As PGW noted, this was one of many instances where Bertie was overly mature and greyed; there seems a deliberate attempt to make Carmichael seem older-- whereas most readers, Wodehouse included, see him as somewhat youngish. In Wodehouse Playhouse, which includes brief vignettes of PGW, he gives his imprimatur to the series for at least casting Bertie somewhat younger. Even better was the stellar performance in Jeeves and Wooster, in which "Pearls Mean Tears" "Comrade Bingo" and a number of these other chapters, expanded into episodes, appear. No wonder such a wonderful series was inspired by such a delightful read.

Published by Thriftbooks.com User , 20 years ago
This was my first Wodehouse book, and it remains my favorite. I have read it at least 10 times, and still chuckle audibly when I do so. It never gets stale. Every single chapter is hilarious. If you love humor and love the English language, you will treasure this book!

Published by Thriftbooks.com User , 22 years ago
This book isn't quite a novel, but rather a series of related short stories that approximate one. Each works quite well in this context and contains the usual Wodehouse verbal charm, but with the added bonus of allowing you to absorb the whole scene without need to reference much of the rest.What you miss out on is the author's (unique, at least in the past century) ability to weave an intricate and unblemished plot over two hundred and fifty pages, but it can be fun to examine a thread in detail from time to time.

One Of The Best Ever Written

Published by Thriftbooks.com User , 23 years ago
I read this book many years ago and it's still refreshing and highly enternaining.

Published by Thriftbooks.com User , 23 years ago
This is the first Jeeves & Wooster story Plum ever wrote. The main characters in this novel are Bertie and his valet Jeeves, a complete gentleman and the first to admit Bertie is a bit of a chump. There's also a wide collection of terrifying aunts, miserly uncles, love-sick friends and unwanted fiances that make the plot really witty. Bertie gets into a bit of a trouble when one of his pals, Bingo Little starts to fall in love with every second girl he lays his eyes on. But the soup gets really thick when Bingo decides to marry one of them and enlists Bertie's help. Luckily, he has the inimitable Jeeves to pull him out of it. Excellent entertainment and a good insight into life in England in the 1920s.

The Inimitable Jeeves Mentions in Our Blog 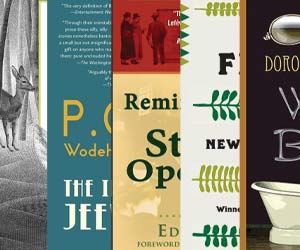 It's interesting to look back at pop culture that withstands the test of time. In the past weeks, we've reflected on some of the notable books and movies that came out five decades ago. Now we turn our attention to the books turning 100 this year. Here are ten memorable books from 1923.