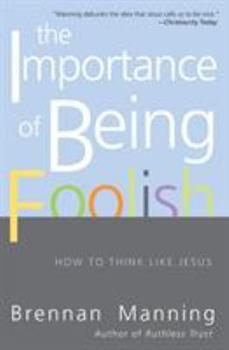 The Importance of Being Foolish: How to Think Like Jesus

In the eyes of the world, Jesus was a fool. He did not abide by the rules of his day; the people he associated with were shunned by society; his Sermon on the Mount reads likea primer on being left behind, stepped on, and ignored. In order for us to truly be the people Jesus wants us to be, we too must learn to become foolish.Becoming a Christian is not a magical enterprise by which we are automatically transformed into better people. We must train...

Published by Thriftbooks.com User , 15 years ago
there isn't one chapter that does not leave the reader unchallenged. i truly admire the way the author makes sure that he does not cut corners or water down the gospel. the author makes sure, by the grace of GOD, that no human excuse or lie is left unexposed. it is essentially a book about repentance and Truth, because true repentance of sins and the heartfelt acknowledgement of Jesus Christ as LORD is the only way for us humans to think like Jesus. Without these two things, you can learn about Jesus in an intellectual way, but not the way we ought to, the way He desires us to and it will always be jampacked with untruth. this book, by GOD's grace, will exhort, encourage and convict. and as I always say, read it with your Bible in hand.

Published by Thriftbooks.com User , 16 years ago
Brennan Manning forever secured his place as an important theologian with The Ragamuffin Gospel. If he never wrote another book, he has served Christianity well with one of the most important books ever written about the faith. But in his book The Importance of Living Foolish, Manning continues his quest to promote a belief in Christ the recognizes the folly of the modern world and its preoccupation with foolish, fleeting things. At the same time, as in The Ragamuffin Gospel, Manning presents the unvarnished Jesus, who was loving, tender, kind, and gentle, but who spoke truth to power, was brutally honest, and was not dismissive of sin. The Importance of Being Foolish stands on its own merits, and Brennan Manning continues to grow as one of this era's greatest standard bearers of Christianity.

Puts into words my own view

Published by Thriftbooks.com User , 16 years ago
I've always thought the Christian message to be a radical rejection of worldy values. But what's generally preached is a watered down version of this message. Manning boldly and in his familiar style asserts that what the world views as foolish is the wisdom of God. It's a tough message but a wonderful one.

Published by Thriftbooks.com User , 17 years ago
Many years ago author Brennan Manning spent two years living with a monastic community known as the Little Brothers of Jesus. The Little Brothers model their days on what they call the "hidden life" of Jesus, the many years he spent in obscurity devoted to manual labor and prayer before launching his public ministry. Manning spent his time shoveling manure, washing dishes, and mediating on Scriptures, among other things The formative experience taught Manning that it's true transparency that we Christians must achieve in order to be a community of people who will live under the sway of the Spirit, "men and women who would be human torches aglow with the fire of love for Christ, prophets and lovers ignited with the flaming Spirit of the living God." But such transparency is foolish in the eyes of the world, as it involves reorienting our lives around the Gospel and ignoring the siren calls of pleasure, power, and security. His latest book (a revision of one of his earliest books), THE IMPORTANCE OF BEING FOOLISH, is a primer in just such foolishness, and in classic Manning form it doesn't pull any punches. It's prophecy in three parts: The Way We Live, The Mind of Christ, and The Power of the Cross. Throughout he preaches against superficial forms of the faith and rallies believers around Christ's love. He weaves together scripture and stories of the many people he's rubbed shoulders with throughout his life to great effect: "I have often seen Jesus Christ's delight over repentant sinners brought to life in the fellowship of Alcoholics Anonymous. The birthday celebrations marking the anniversary of an alcoholic's first, third, eighth, or twentieth year of sobriety resound with the merriment of the prodigal's return. An old broken man name Phil with three teeth in his mouth lived as a drunk on the streets for twenty years. Now he walks to the podium in a packed and quiet room. It's his first birthday. Nobody thought he'd make it. He starts to speak about once being lost and now being found. He suddenly chokes up and turns his back to the audience. A standing ovation starts. Men and women storm the podium. They kiss Phil on the lips, cheek, neck, and shoulders. Christ's compassion is illuminated with astonishing clarity at the dinner given in the house of Simon the leper (Mark 14:3-9). Some of the guests become infuriated when a woman breaks an alabaster jar of precious perfume and begins pouring it over Jesus's head. 'Leave her alone,' Jesus commands. 'Why are you bothering her?' He is so deeply moved by the women's kindness that he wants it recounted and retold all over the world. 'Write this down!' he tells them. 'Until the end of time I want you to know how deeply this woman's love has affected me.' This statement is the long pent-up explosion of a love that can express itself at last, the secret of a heart pouring itself out. Jesus not only defends the woman's action but affirms her worth and acknowledges that he has been profoundly moved

Published by Thriftbooks.com User , 17 years ago
Manning is an incredible writer. He is a poet, a storyteller and a preacher all at the same time. In this book, Manning calls on serious Christians to truly endeavor to put on the mind of Jesus. He calls us to walk in truth. Stop deceiving ourselves with the world of delusion and unreality. There is no cheap grace advocated here. We are to open ourselves up for the life Jesus lived - a life of prayer, unselfishness, forgiveness, creative goodness and purity of heart. The radical demands of Jesus remind us that we can never earn salvation; it is God's free gift to us. Manning also calls on us to be transparent. We must avoid our preoccupation with three strong human desires: security, pleasure and power. To do this, we must not only accept Jesus as our Savior, but also shape our lives according to his teachings. Care only about God's judgment when you act. Become a new creation through union with Christ. Really love God with all your heart, soul, strength and mind. Obey God's commands. Develop an interior life of trust and surrender to God. Love our neighbors by forgiving and serving them. Put our minds and hearts on the path of Christ. Paul writes in Corinthians that the message of the Cross is foolishiness to those who are perishing. The world views us as fools. If you want to rearrange your lives around the mind of Christ, read this book. Become foolish.
Trustpilot
Copyright © 2022 Thriftbooks.com Terms of Use | Privacy Policy | Do Not Sell or Share My Personal Information | Accessibility Statement
ThriftBooks® and the ThriftBooks® logo are registered trademarks of Thrift Books Global, LLC