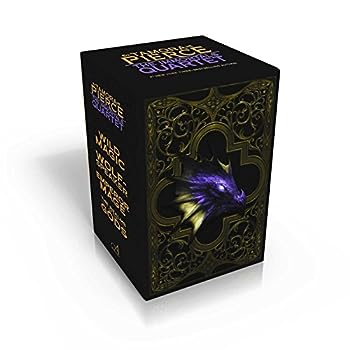 The Immortals Quartet: Wild Magic; Wolf-Speaker; Emperor Mage; The Realms of the Gods

(Part of the Tortall Series and The Immortals Series)

Experience the legend, adventure, and wild magic of the Immortals quartet, now available in a collectible boxed set with new cover art and afterwords from the acclaimed author of this beloved fantasy series, Tamora Pierce. Set in the magical medieval world of Tortall, the Immortals quartet follows the adventures of Daine, a brave young orphan with a mysterious "wild magic," the power to talk to animals, a quest to hone her magical skills and discover...

Published by Thriftbooks.com User , 13 years ago
Love all the Tamora Pierce books. Love that most have a heroine as the main character. Highly recommend these books.

I am a fan

Published by Thriftbooks.com User , 15 years ago
I am a Tamora Pierce Fan though the immortal series isn't my favorite it does fit in nicely after the Alanna quartet, and the main characters show up in later quartets, so when you get to the protector of the Small quartet you have all of that back story.

A great introduction to fantasy...

Published by Thriftbooks.com User , 17 years ago
After reading The Immortals, I have to admit that it's one of the better sword & sorcery style fantasy books I've ever read. The four stories in this collection are all fairly easy to follow, pretty straight-forward, good action/adventure with a touch of romance. The tedium of those fantasy authors who go to great detail to rename everything and come up with a gigantic cast of characters whose names you can never keep track of, and featuring wild creatures the average reader will have trouble imagining is blessedly missing here. Tamora keeps things much simpler with a handful of characters per story and her own spin on classic fantasy critters with only a few newcomers she describes rather well. The collection features a strong teenaged female lead who never actually feels that strong, who attempts to adjust to a new life, blossoming womanhood, and strange developing magical abilities simultaneously under the guidance of a mysterious sorcerer, the cunning King's Champion (also female), her animal friends, and a host of magical beings and gods. I would have given this book five stars, but I believe the author could use a little spit and polish on her writing style. There are several passages where things happen so quickly from the heroine's point of view, that the story jumps its track momentarily, making the reader have to go back and re-read the lines leading up to that point in order to better understand what's going on. There are also a few areas where the question of continuity comes into play. If Tamora would slow down a bit as she writes, perhaps taking the time to re-think scenarios during her rewrites, she could probably better describe a few scenes if she'd put herself in her characters' places and really imagine what's going on rather than let the writing muse sweep her along. The technical points are minor, yet noticeable, though her storylines overall are concise and just plain fun. The Immortals is enjoyable for adults as well as teens and even boys as well as girls. It's particularly good fun for anyone who loves nature and the things which populate it, and lovers of any good fantasy tales. Worth a read and a re-read later on! Great to read aloud to someone you care about.
Trustpilot
Copyright © 2022 Thriftbooks.com Terms of Use | Privacy Policy | Do Not Sell or Share My Personal Information | Accessibility Statement
ThriftBooks® and the ThriftBooks® logo are registered trademarks of Thrift Books Global, LLC