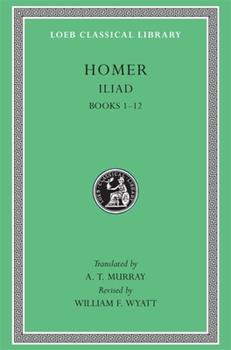 Here is a new Loeb Classical Library edition of Homer's stirring heroic account of the Trojan war and its passions. The eloquent and dramatic epic poem captures the terrible anger of Achilles, "the best of the Achaeans," over a grave insult to his personal honor and relates its tragic result--a chain of consequences that proves devastating for the Greek forces besieging Troy, for noble Trojans, and for Achilles himself. The poet gives us compelling...

Published by Thriftbooks.com User , 21 years ago
This edition, in the original Greek, contains half of the Iliad and is followed by several other volumes, which contain the second half of the Iliad, the Odyssey, and the Homeric Hymns.The Iliad centers around the anger of the warrior Achilles when Agammenon unjustly takes his concubine. Achilles subsequently refuses to fight, and, because his divine strength makes him indispensible to the Greek war effort, the Greeks are nearly driven from the Trojan shores.Reading this book in the original language makes a big difference. Homer is a master of both sound and sense and to read him in translation deprives the reader of the former.The lack of commentary and vocabulary in this edition does not make it the best choice for beginners in Greek.
Copyright © 2020 Thriftbooks.com Terms of Use | Privacy Policy | Do Not Sell My Personal Information | Accessibility Statement
ThriftBooks® and the ThriftBooks® logo are registered trademarks of Thrift Books Global, LLC