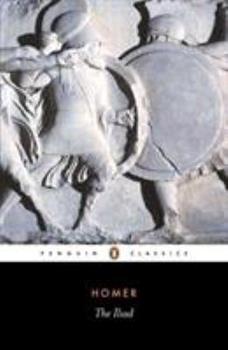 by Homer and Homer Iliad

'The best modern prose translation of The Iliad ' Robin Lane Fox, The Times The first of the world's great tragedies, The Iliad centres on the pivotal four days towards the end of the ten-year war between the Greeks and the Trojans. In a series of dramatic set pieces, it follows the story of the humiliation of Achilleus at the hands of Agamemnon and his slaying of Hektor: a barbarous act with repercussions that ultimately determine the fate of Troy...

Published by Raychel Chang , 2 months ago
I'm extremely disappointed in my order. Based on the ISBN and picture displayed, I believed I was receiving Richard Lattimore's translation of Homer's Iliad and paid almost $13 for my order; I instead received a janky study guide to Homer's Iliad that has a price tag of $1 on it. It is not at all what was pictured when I placed my order and I feel misled. I triple-checked everything before ordering and still received something not at all what I ordered.

Published by Foxtrotter67 , 9 months ago
Ordered this for my brother as a gift, but when it arrived the back panel for the dust cover (the part that actually tucks into the book) was cut off. Disappointing, but he still loved it. Good classic in okay condition otherwise

Published by Thriftbooks.com User , 16 years ago
I absolutley adored this book. I am reading the Odyssey now. I recommend you read both. It adds depth to the whole tale.

Published by Thriftbooks.com User , 16 years ago
I don't think that this translation has been given the respect it deserves. It could be called low-brow or simplified, suitable only for children. I think such comments spring from snobbishness. The langauge is simple, but forceful. It moves at a short, brisk pace, suitable for a war story. It is meant to be read out loud. Readability is nothing to be ashamed of either. If you doubt that, try reading Lattimore's translation of the Iliad. I would probably choose Fagles over this translation, if I had to choose one, but I recommend taking a look at this.

The best Iliad for the general reader

Published by Thriftbooks.com User , 17 years ago
The Iliad is one of the greatest treasures of Western Civilization-and not just because a teacher told you it was. On the surface, it offers raw emotions, visceral action sequences and colorful characters you admire and hate, often at the same time. But it is much, much deeper than that. The scene where Hector bids his young wife good-bye and holds up his infant son to the gods, praying that the boy will one day be a better man than ever he himself was, has never been equaled as a statement of what it means to be a man, husband or father. The debates about honor and duty are still the same we face every day. The humanity, insight and profound philosophy are remarkable-especially for a work now 3,000 years old. The problem? How do you convey all that power? How do you do so in a way that captures the feel of original? Iliad translations have started to come fast and furious, as every ten years or so someone tries to tackle the monumental task of bringing the poem to modern readers. The process isn't helped by the fact that the text was already 300 years old to the classical Greeks like Aristotle, Sophocles and Euripides-making it as vaguely old-fashioned as Shakespeare is to us. Should it sound antiquated to us, too? If you really want a line by line translation, one that has some kind of meter that approaches the Greek original, the obvious choice is Lattimore's classic translation. It has the side benefit now of being somewhat dated in its English usage too. That said, for just a good ol' read of the Iliad, Lattimore isn't even my third choice. For all its accuracy, I've always felt I was reading a textbook, written by a classics scholar rather than an honest-to-goodness writer. Lombardo, on the other hand, is my preferred translation for sitting back and reading what is still a rip-roaring adventure (with enough deep thoughts to give it extra weight). Lombardo confesses there really is no way to adequately convey the "musicality" of the original, and goes on to re-cast it in freer poetry, based on natural speech. He's built up his translation thru multiple performances of the poems, with drum accompaniment, in public places, and his Iliad is honed to a razor sharp edge. The musty old poem students rolled their eyes at becomes a terrifying, beautiful beast that grabs you by the throat and doesn't let go. It is so immediate, trilling and relevant. Lombardo's translation is an Iliad you will feel, not just respect. Pick up the Lombardo translation and you will understand immediately why this work is still called the cornerstone of Western culture.
Trustpilot
Copyright © 2022 Thriftbooks.com Terms of Use | Privacy Policy | Do Not Sell or Share My Personal Information | Accessibility Statement
ThriftBooks® and the ThriftBooks® logo are registered trademarks of Thrift Books Global, LLC