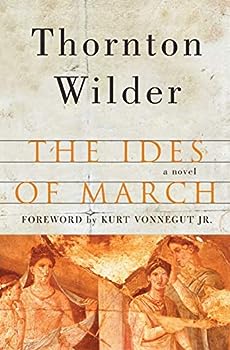 The Ides of March: A Novel

This description may be from another edition of this product. First published in 1948, "The Ides of March" is a brilliant epistolary novel set in the Rome of Julius Caesar. Through imaginary letters and documents, Wilder brings to life a dramatic period of world...

If you liked "I, Claudius," you will like this book...

Published by Thriftbooks.com User , 13 years ago
I think this wonderful epistolary novel deserves to better known. Even though it is critically acclaimed and by a famous American writer, I, a huge fan of quality historical fiction set in Rome, never heard of it for years. Using letters, journals, and excerpts from other "documents," Wilder tells the story of Caesar in the days leading up to his assassination. We already know what will happen of course, and our attention is sustained by the subtle way Wilder sets the scene and coyly circles around as he approaches his climax. This is not linear narration; I think an author attempting just to "novelize" the historical account the old-fashioned, chronological way would end up writing the type of simplistic, melodramatic "reads like a made-for-TV movie" type of historical fiction that makes me so wary about the genre. Some readers, perhaps accustomed to being entertained by everything these days, including their history and documentaries, etc., may find this book a little dry. In this, the work reminds me of Graves' "I, Claudius," and "Claudius, the God," which also purposefully uses a drier prose style to achieve a certain effect. I thought "The Ides of March" was especially engrossing for the very reason that it eschews over the top dramatization, but I would not be suprised if did not appeal to many readers' tastes.

Published by Thriftbooks.com User , 15 years ago
This excellent novel, Wilder's masterpiece, is set during the last 17 years in the life of Julius Caesar in Rome. In it he attempts to answer the following: "What sort of person was Caesar and why was he assassinated?" Told mainly through letters and documents of people who knew him, from the famous - Cleopatra, Catallus, Cicero, Brutus - to the lesser known - Cytheris, an actress; Turrinus, a friend; Cornelius Nepos, a political observer - and including such sources as Caesar's commonplace book and journal, broadsides, and various official memoranda, Wilder creates a brilliant picture of the man and the people who surround him. We learn of Caesar's great love for Rome, but his disdain for those who populate her. In a magnificent observation by his physician Sosthenes, he says, "Caesar does not love, nor does he inspire love. He diffuses an equable glow of ordered good will, a passionless energy that creates without fever, and which expands itself without self-examination or self-doubt....I could not love him and I never leave his presence without relief." Those few sentences speak volumes. We see in Caesar's own (private) letters how different the public figure (lofty, dictatorial, the great warrior) is from the private man (amused by human folly, lonely, sensitive to those who have been injured by life's cruelties). Yet the book is not just a history lesson, despite its appearance, but a moving novel that builds masterfully to a stunning climax on the Ides of March with his murder. The book is truly magnificent, filled with much insight into human motivation and observation. Definitely worth looking into.

A unique historical novel of the last year of Julis Caesar

Published by Thriftbooks.com User , 17 years ago
I think most people know the story of Julius Caesar's death: stabbed 23 times on March 15th during a session of the Senate. What Thornton Wilder has done with his novel is to give the reader a glimpse in to the human side of Caesar, through journal entries and correspondence from him and those surrounding him. We learn of the statesman, who tries his best to govern his people; of his "divinity" and his tolerance of the belief in gods and goddesses; of the family man living in a tepid marriage with his wife Pompeia; and of his attraction to intellectuals, whether if be the poet Catullus, whose poetry he highly regards even if it mocks him, and the beautfiul Egyptian Queen Cleopatra, whom he considers almost an equal in terms of ability to rule. Wilder also lets us in on public opinion concerning the Dictator, as Caesar was also known, through intercepted correspondence of Clodia Pulcher and others. Caesar becomes more of a human figure in the hands of Wilder. He has his foibles and his share of indecisions, just like any other person. He also tries to do what he believes to be the right thing in terms of treating others. A unique historical novel.

Published by Thriftbooks.com User , 21 years ago
I really liked Thornton Wilder's "The Ides of March" because of it's drama and it's philosophical content. The first thing to note is the great structure of the book which makes it very dramatic. The book is structured into four separate parts and each parts leads up to a scene that is anticipated throughout the part. For part I, it is the dinner at Clodia and Clodius Pulcher's; for part II, it is the reception at Cleopatra's; for part III, it is the profanation of the mysteries of the goddess by clodia pulcher and her brother; and for part IV, it is Caesar's assasination. From the very start of each part, Wilder whets your appetite for how the climactic event is going to go and I was so anxious to find out what happened, which kept me turning the pages. The second thing I want to mention is the great amount of thought provoking philosophical content in this concise, 246 page novel. There is alot of reflection in Caesar's journal about the rational grounds for religion (a belief in God or the Gods), there is a passage on living one's life with the knowledge that one will die one day, and stuff about love and relationships. Also, there is alot of character analysis, analyzing Caesar's character, contrasting it to Cicero's and Junius Brutus's and others. The fact that Caesar and these others are these famous historical figures from ancient rome tinges it all with that feeling that one is gaining an education about the roots of Western Civilization, in touch with the classics. My favorite parts are probably the letters of Caesar to his friend Lucius Mamillius Turrinus because of the great philosophical content and also the letters at the end of each section where some other character will describe in a long letter what happened at the climactic event. I heartily recommend this book because of the great drama and philosophical content. I've read other books set in the ancient past, such as Mary Renault's "The Last of the Wine", set in ancient Greece during the Peloponessian War, but I like this one better because there is more drama, more excitement, as well as more philosophical content, more real wisdom about life. And it does all this in 246 pages compared to around 430 for Renault's book. Any fans of this book who have recommendations for me please e-mail me! Greg Feirman