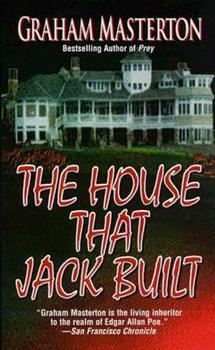 The House That Jack Built

This description may be from another edition of this product. Craig Bellman is determined to live in an old mansion, Valhalla, that echoes with a terrible, agonized sobbing. His wife hires a spiritualist to rid Valhalla of its fearsome vibrations. But as death...

Published by Thriftbooks.com User , 16 years ago
Until I read this book, there were only two "haunted house" books in the horror genre that I respected -- "The Shining" (of course) and "The Haunting of Hill House". Now there are three. Once I picked up this book, I simply could not put it down. The haunted house itself was terrifying. The characters and their lives and problems were unique and intriguing. Graham Masterson is the master of putting in little bizarre touches that make goosebumps go down your spine. He knows when to push full-throttle ahead with the horror and when to just be weird and spooky. He's not lazy, either -- he comes up with a full-spectrum explanation of hauntings in this book that is truly paranormal and extremely weird ... "Life is like a book ..." I promise you, the first chapter itself will grab you by the guts and not let you go ... if you can put this book down you're either sleeping or dead. Buy this book, horror fans -- you won't regret it!

It's only a matter of time

Published by Thriftbooks.com User , 17 years ago
Masterton, is one of the great storytellers of horror. He writes America better than Americans. In fact I found my self confused by the Brittish syntax of the text. Anyhow, the finer points of this novel are origin of the haunting and atmosphere. I found the house especially scary in that it was in disrepair and not quite livable. If you've ever been dragged to the country to a house supposedly haunted, it was likely in this state. The emptiness and openness of it without the comforts of home make the people that much more vulnerable. The origin of the hauntings I'll let you read for yourself. The only thing I'll say is that it has to do with the overlapping of time. Great read all the way through.

Published by Thriftbooks.com User , 18 years ago
Craig and Effie Bellman are your typical upscale New Yorkers. Craig heads up his own law firm, specializing in international law with an emphasis on Japanese corporate clients. Effie works at a modern art gallery. Life is going well for this wealthy couple until horror descends on Craig one rainy March evening. While in route to an important meeting with one of his clients, Craig makes a tragic mistake by mouthing off to his cab driver. After being thrown out of the cab, Craig stupidly helps a young woman who claims one of her friends is being raped in an abandoned store. Big mistake. Craig just got set-up and takes the fall when two thugs associated with a local gang rob and mutilate him. Craig's sense of manhood is permanently shattered by these terrible events, and his relationship with his wife teeters on the brink of disaster until the Bellmans take a vacation in the Hudson River Valley. During the course of this stay away from home, Craig and Effie discover Valhalla, a decaying estate built by the famous business tycoon and gambler Jack Belias in the 1930s. The house is a disaster, with collapsed sections of roofing, decayed floors, shattered windows, and rodent infestations. Even worse, the locals believe evil spirits wander the halls of the house.Although Effie takes an instant disliking to Valhalla, something about the estate calls to Craig through the depths of his depression. As he says several times during the course of the story, the house "is me," that this money pit speaks to him on a fundamental level. Craig quickly decides he must have this house even though the restoration alone will cost several million dollars. He enlists the help of Norman Moriarty, a local man with a penchant for using the word "like" in every sentence and a whiz at restoring old properties, to help him refurbish the building. As Craig becomes increasingly involved in restoring the house, his personality and physical appearance begin to change. He becomes downright belligerent towards his wife and total strangers, eventually resorting to terrible outbursts of violence. Effie is less than enthusiastic about the entire project. She wants to support Craig if it means helping him emerge from his tragedy, but the house completely spooks her at every turn. When one of the surveyors hired by Craig dies in a terribly disgusting way, Effie is even more anxious about the situation she finds herself in. She slowly comes to realize that the house is seriously amiss after hearing ghostly sobbing from an upstairs bedroom and spotting a mysterious figure running through the house. Effie soon enlists the aid of aging hippie Pepper Moriarty, Norman's mother and the owner of a psychic/herb/witchcraft store in town to help her discover what secrets the house holds. The answers are many and most are not pleasant. What seems to be a tale of a simple haunted house turns into, in author Graham Masterton's hands, a complex tale about coincident realities and bizarre theories about

Published by Thriftbooks.com User , 21 years ago
Typical Masterton, from the first page you are into the story and you are hooked. I have read Masterton for over 20 years and although it makes you squirm with the usual graphic detail, the story has a very spooky feel about it and keeps you guessing right until the end. To sum up how good it is my partner who vowed never to read such a book, could not put it down and now like myself, is a Masterton fanatic. I am looking to purchase Masterton H/B books please email me.
Copyright © 2020 Thriftbooks.com Terms of Use | Privacy Policy | Do Not Sell My Personal Information | Accessibility Statement
ThriftBooks® and the ThriftBooks® logo are registered trademarks of Thrift Books Global, LLC