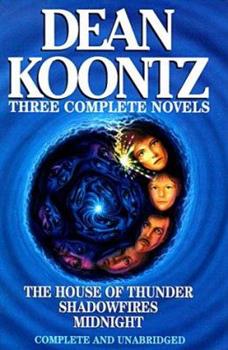 This description may be from another edition of this product. A spine-tingling omnibus collection of three favorite novels--all complete and unabridged--by the master of the horror genre encompasses The House of Thunder, Shadowfires, and Midnight.

Published by Thriftbooks.com User , 21 years ago
All three of these books are great to read for Dean Koontz fans.HOUSE OF THUNDER has a young woman who wakes up in a hospital with little memory left to tell her who she is, where she is, where she came from, and what she is doing there. But soon, she begins to have visions (or she is actually seeing) four dark figures from her past. Now, the question is what do they want from her?SHADOWFIRES has a woman who wants a divorce from her manianical husband, and he gets killed in a traffic accident on the day there supposed to get the divorce. A few days later, she is being stalked by someone or something that resembles her dead husband.And MIDNIGHT finds the residents of a small town changing into beasts that act out there dreams and fantasies. Only a select few are left to battle a mysterious force that is chaging the town into a living hell.

I've only read The House of Thunder, and The Funhouse.

Published by Thriftbooks.com User , 22 years ago
Both of them are great books. Stephen King used to be my favorite writer until my brother introduced me to his books, and I'm glad he did. So far I have'nt found a single one of his books that are bad or that saunds good.

Published by Thriftbooks.com User , 22 years ago
Dean Koontz delivers and awesome trilogy of stories. It hits hard with THE HOUSE OF THUNDER. It begins very creepy, grabbing you from the first page. Next, and weakest (but still great) is SHADOWFIRES. It is a little slow to begin with, but quickly becomes fast paced and exciting. The last, MIDNIGHT, is probably the most creepy. Most of the resident of Moonlight Cove, California are changing . . . losing emotions, becoming animals. But what is causing it . . . and how will the few normal humans make it out when they become violent?

If it wasn't for this book I would still be a tv zombie.

Published by Thriftbooks.com User , 24 years ago
My mom always reads books.When was younger I always thought reading books was a waste of time.I could think of better ways to spend my time.One day someone gave me one of your books "The Voice of The Knight".That book got me hooked on your books.I couldnt stop reading them.I now have a collection of them.To this day I still think "The Voice of The Knight" is the best book you have ever written. I just wanted to say thank you for getting this teenager intrested in reading.
Copyright © 2020 Thriftbooks.com Terms of Use | Privacy Policy | Do Not Sell My Personal Information | Accessibility Statement
ThriftBooks® and the ThriftBooks® logo are registered trademarks of Thrift Books Global, LLC