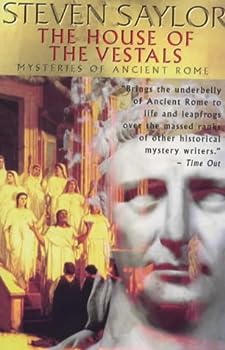 The House of the Vestals (Mysteries of Ancient Rome)

This description may be from another edition of this product. It is Ancient Rome, and Gordianus the Finder has a knack for finding trouble. Known to many as the one man in the ancient world who can both keep a secret and uncover one, Gordianus lays bare some of...

Published by Thriftbooks.com User , 14 years ago
This a collection of short stories, easy to follow and different from each other. Each describes different aspects of the Roman world, from customs, festivities, beliefs and superstitions. This book is ideal for students studying English as a Second Language, or any kind of classroom. Students will find these easy stories informative, interesting and educative. My favorite mysteries were "The King Bee and the Honey" and "Little Caesar and the Pirates."

Even his short fiction in this series shines!

Published by Thriftbooks.com User , 19 years ago
I've loved Steven W. Saylor's work even before he published under this name and his Gordianus series is better by far. This is actually a collection of 9 short stories, all of which were previously published in mystery magazines. All of the stories are good solid character pieces with mysterious happenings and detective work that makes sense for the time period involved (90-73 BCE). Several of the stories are told as stories by one character to another though several are also the ongoing investigations of the finder himself. Historians may cringe a bit but frankly, in this ancient historian's opinion, Saylor's series is about the best I have ever read particularly his portrayal of slavery, a human institution often misunderstood and misrepresented by modern Americans.

An underrated gem for the Saylor enthusiast.

Published by Thriftbooks.com User , 19 years ago
A worthy contribution to the historical mystery genre (if such a classification exists), "The House of the Vestals" exhibits both the detective skills of Gordianus the Finder and the remarkable writing ability of his creator to telling effect.As Saylor himself points out in the foreword, some of his readers may have found themselves wondering what happened to the Roman sleuth between the years 80 BC (the setting of his first novel, "Roman Blood") and 72 BC (the year of the Spartacan slave revolt, as described in the sequel "Arms of Nemesis"). "The House of the Vestals" provides the answer, filling in the eight-year gap with nine intriguing short cases that test Gordianus' wits and leave the reader yearning for more.Four of the stories are based, in varying degrees, on real events (in accordance with Saylor's acknowledged writing style) while the rest dwell on aspects of Roman life that have come down from us through the ancient sources. "The House of the Vestals" -- the closing story from which the entire anthology derives its name -- is by far the most faithful to history, inspired by the allegations of unchastity levelled against two Vestal Virgins and their alleged paramours by the demagogue Publius Clodius in 73 BC. Some of the characters in this and the stories preceding it have featured in Saylor's other novels, ensuring that this "flashback" addition to an otherwise chronologically released series maintains full relevance all throughout Roma Sub Rosa and throwing in a bit of irony as to the eventual fate of recurrent figures.True enough, the stories included in the anthology are far too short for those (myself included) who may have gotten used to long-winded plots and vast settings in Saylor's other works. Be that as it may, the life of Gordianus the Finder could never be complete without these little in-betweeners to fill the time between more significant events. Moreover, "The House of the Vestals" offers a wonderful solution for people beset with a shortage of leisure time: read a story whenever you feel like it. (After all, for people like me, it takes a Herculean effort to pull away from a novel when things begin to turn exciting.)

Published by Thriftbooks.com User , 20 years ago
I can't get enough of Steven Saylor's Gordianus the Finder, and this marvelous collection of short stories was like opening a box of Godiva chocolates - each one is delicious! I have read nearly all of the Roma Sub Rosa series featuring the wonderfully human, intelligent, and dedicated Gordianus, and come to think of him almost as an extended family member. For other Gordianus-aholics, this collection of stories nicely fills in the gaps left in the longer novels - finally we find out all about the night Catilina raped a Vestal...or did he? We hear Gordianus' sexy, sassy slave (now wife) tell tales of her native Alexandria, and we learn all about Lucius. But the best part of this collection is you need no previous experience with Gordianus to have a rollicking good time. As Gordianus winds through the streets of ancient Rome, exposing frauds, murderers, and thieves, you will be caught up in the spell Saylor's crisp writing always weaves. Warning: clear some shelf space. Once you're hooked on Gordianus, you'll want to read them all.

Delight yourself while accompanying Gordianus

Published by Thriftbooks.com User , 20 years ago
Fans of Gordianus, the Finder will be happy to get a hold of this book right away. It includes nine short stories in chronological order to be read after "Roman Blood" (the first novel in the series). Saylor's writing is so rich, that not only will appeal to mystery and history lovers, but also to lovers of ancient tragedies. "Death wears a mask" shows Gordianus in a theatre where, all of a sudden, murder strikes; but we cannot but marvel at the piece of lyrical dialogue briefly offered to us here. Unusual roman customs delight us in both "King Bee and Honey", a story of a passionate love affair that ends up in tragedy; and "The Lemures", where the mysteries of the Occult intertwine in the daily roman way of life. My favorite story in particular is the one that closes the book (and also titles it) "The House of the Vestals". The interesting part in this story is not only the plot in itself, but the way it shows a vivid picture of the temple consecrated to the Roman Goddess Vesta; with its gardens and fountains, and the lifestyle of the women who from a very early age were chosen to be offered to her as guardians of the eternal fire.Once more, reading Saylor teaches us about Rome and its character; while in the meantime, it teaches us about ourselves.
Copyright © 2020 Thriftbooks.com Terms of Use | Privacy Policy | Do Not Sell My Personal Information | Accessibility Statement
ThriftBooks® and the ThriftBooks® logo are registered trademarks of Thrift Books Global, LLC