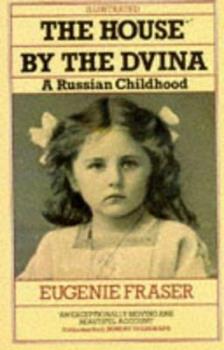 The House by the Dvina: A Russian Childhood

This is an account of life in Russia before, during and immediately after the Revolution culminating with the author's escape to Scotland. It is a story of two families, separated in culture and geography, but bound together by a Russian-Scottish marriage.

Published by Thriftbooks.com User , 12 years ago
I first read this book many years ago when a Swiss friend sent it to me. I could not put it down and the fact that I have read it cover to cover at least three times indicates how special I think it is. It gives a vivid account of what life was like in an aristocratic household in Russia in the years leading up to and during the revolution. The richness in love, piety, generosity, and tradition give us a much different view of the noble class than the usual decadence and frivolity of Hollywood descriptions of Russian aristocracy. This is a true tale that weaves an incredible tapestry of characters and events against the background of a remarkable time and place. Best read in winter in front of a cozy fire.

What an incredible childhood -- during an historic time!

Published by Thriftbooks.com User , 13 years ago
A beautifully written book by an amazing woman. Eugenie Fraser returned to school in her 80's to take a course in creative writing -- and what a good thing she did! The story of her childhood - spent between Archangel, Russia and a small Scottish town - is absolutely amazing. Her reminiscences of pre-revolutionary Russia and Edwardian Scotland are extraordinarily clear. Fabulous accounts of the cold winters, warm summers playing by the River Dvina, Orthodox Christmas, traveling on ice breakers and trains, stealing out of Russia for the last time following the Revolution... Makes a lovely gift around the holidays -- with its emphasis on family and holiday celebrations.

Published by Thriftbooks.com User , 17 years ago
I enjoyed this book because it described a time and place, Russia from 1905 through 1920, that I knew little about. The author tells the story of her parents' love match -- a young Scottish woman marries a Russian man and moves to his country -- and the family events that followed, including her own birth. Very charming and sad. I'm so glad Ms. Fraser wrote an autobiography instead of trying to turn her story into a novel as so many younger writers from potentially interesting backgrounds are doing today. This way she was able to include various events that were exciting, fun or touching without stretching to find some novelistic reason for including them.

Published by Thriftbooks.com User , 18 years ago
Very interesting book by Mrs. Fraser, who was a child of a Russian-Scottish marriage in pre-revolutionary Russia. This has to be one of the very few detailed accounts of life in the Arkhangelsk region around that time, at least in English. Following a recounting of some of her family's colorful history, the book essentially tracks the pre-war years of her memory through the civil war and her escape from Russia. I had a hard time putting it down and am looking forward to reading her follow-up book dealing with this subject, "The Dvina Remains."

Deeply moving and vivid account of an amazing time and place

Published by Thriftbooks.com User , 22 years ago
This is by far the most moving book I have ever read. It is an extremely detailed and vivid portrayal of life in a well to do (but not aristocratic) Russian family.The early parts of the book give a detailed and fascinating histroy of the authors relatives prior to her birth. Then in an gripping and extremely colourful narrative she describes her childhood at the start of this century until the family is forced to flee Russia shortly after the Russian revolution.This book stirs up such strong images that it is almost like watching a film, and only one I know of is so evocatice. Schindlers List.There are two other books by Eugenie Fraser. I have not read the second about her life in India after the Second World War , but have been told it is a little disappointing. However her final book 'The Dvina remains' is again a gripping and slightly harrowing account of her return to Archangel and her correspondance with relatives who remained in Russia. Also well worth a read.
Trustpilot
Copyright © 2022 Thriftbooks.com Terms of Use | Privacy Policy | Do Not Sell or Share My Personal Information | Accessibility Statement
ThriftBooks® and the ThriftBooks® logo are registered trademarks of Thrift Books Global, LLC