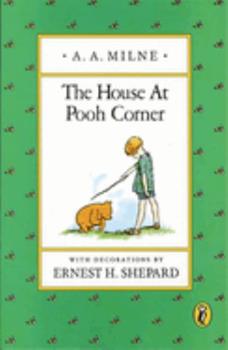 The House at Pooh Corner

(Book #2 in the Winnie-the-Pooh Series)

Happy 90th birthday, to one of the world's most beloved icons of children's literature, Winnie-the-Pooh Return to the Hundred Acre Wood in A.A. Milne's second collection of Pooh stories, The House at Pooh Corner . Here you will rediscover all the characters you met in Winnie-the-Pooh Christopher Robin, Eeyore, Owl, Piglet, Kanga, tiny Roo, and, of course, Pooh himself. Joining them is the thoroughly bouncy and lovable Tigger, who leads the rest into...

Published by Thriftbooks.com User , 17 years ago
I sing of a boy and a bear... Perhaps Vergil would have opted for Pu (Pooh) rather than Aeneid had he the choice, and begun his tome not in the journey from Troy, but rather the journey around the forest. The tradition of translating Pooh into Latin started with Alexander Lenard, who translated 'Winnie the Pooh' in 1960; Brian Staples carries on the tradition in his 1980 Latin translation of 'The House at Pooh Corner'. I have this sitting next to books of equally interesting translation exercise, such as a translation of modern poetry into Old English, and Henry Beard's translations of various ordinary statements and phrases in Latin (and cat behaviours in to French) also sit next to this honoured tome. When I returned from Britain and began to think in theological-training terms, I had to re-acquaint myself with Latin; for an exam I had to memorise one biblical passage, one passage from the Aeneid, and one passage of my choice. I chose Winnie Ille Pu and Winnie Ille Pu Semper Ludet, and, as this type of work had not been excluded from the list, I was permitted this indulgence (I believe that the exam list now has a section of excluded works, including this one, more's the pity). Do not be frightened off by the fact that this is a book in Latin. It is very accessible, and quite fun to read with the English version of Winnie-the-Pooh at its side. The Latin version has kept many of the original illustrations as well as the page layout forms. Statements sound much more grand in Latin: 'Ior mi,' dixit sollemniter, 'egomet, Winnie ille Pu, caudam tuam reperiam.' which means, 'Eeyore,' he said solemnly, 'I, Winnie-the-Pooh, will find your tail for you.' This is a delightful romp through a language study. I have recommended the Pooh (sorry, Pu) books to friends who want an introduction to Latin, together with the Lingua Latina series, which uses a natural language method for instruction. Like Lenard before him, Staple's work of translation is obviously a great labour of love here. Staples worked on his translation while recovering from a stroke; a resident of Sutton Coldfield, England, he passed away in 1996. This work is no small endeavour, but rather a thorough and engaging translation of the continuing Pooh story. One can (as I do) set the classic English version of Winnie-the-Pooh side-by-side with Winnie-ille-Pu Semper Ludet and follow line by line the engaging story, which translates well into this one-time universal language. And why ever not? Surely if there is a story nearly universal appeal, it would be of dear Winnie. As A.A. Milne was a graduate of the Westminster School (which is housed down the block from my old Parliamentary offices) and of Cambridge, he might consider the translation of his classic work into the classical language a signal honour, and one wonders if, given the fact that Milne studied classical languages himself, if he ever translated any pieces, however small, into those languages that every English schoo

The One Book That Influenced Me the Most

Published by Thriftbooks.com User , 17 years ago
I was participating in an on-line discussion on the subject of the single book that had influenced us each the most. The book that first came to my mind was "The House at Pooh Corner". It seemed rather silly, but after considerable reflection I decided it was probably the correct answer after all. The book was read to me by my Dad before I could read, and I still re-visit it occasionally fifty years later. In fact, I wouldn't be adverse to using it's ending as my epitath.

A must for Pooh and Latin fans alike!

Published by Thriftbooks.com User , 20 years ago
Who can resist a classic tale of a boy and his bear retold in the language of the ancient Romans? Translator Brian Staples does a wonderful job of keeping to Milne's original adventures while adhering to the confines of a "dead" language. This book is a must for those who love Latin! Proudly display this little treasure next to your tattered copy of Winnie Ille Pooh, translated by Alexander Lenard. And if you simply love Pooh, yet know nothing of classical Latin, this book is certainly one to add to your collection. Being that I teach Latin and have been an avid Pooh fan for the extent of my life, I can't imagine not having this book in my library!

The House at Pooh Corner Mentions in Our Blog