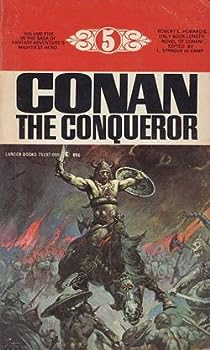 This description may be from another edition of this product. Also known as "Conan the Conqueror," The Hour of the Dragon is Robert E. Howard's only full-length novel about Conan, and it is considered by many to be one of his best works. During Conan's reign as...

The one that got me hooked on REH

Published by Thriftbooks.com User , 18 years ago
When I was ten years old I stumbled across the Lancer edition of this book,their edition of Howard's "The Hour of the Dragon," which actually ran as a serial in "Weird Tales" in the 1930s (none of REH's work was actually published as a novel during his lifetime, with the possible exception of "Almuric," which I can't remember for certain but it may have been). At that age I probably had no business reading it, but I made my first purchase ever of a book when I bought it. Amazingly, even though that was over thirty-five years ago, I still own the book.The book is fast-paced, action packed, and carries the eerie atmopshere that so many Howard stories do (what is it about authors who shoot themselves that seems to tie them so closely to great story-telling?). Conna faces insurmountable odds in losing his kingdom, and naturally, he eventually overcomes them. The fun of the tale is in following his adventures as he travels the world to find the means to defeat his enemies.Obviously, Howard isn't everyone's cup of tea. There is an air of fatality and finality looming over all of his best works, including this one. Despite Conan's ultimate victory, you almost sense that Howard knew, and by extension Conan knew, that all victories are short lived and would soon pass.Regardless, if you have an interest in sword and sorcery, this is must reading and probably a good starting point for people new to the genre. Howard is essentially the father of the genre and is still the best in that area in my opinion.Just looking at a lot of the deriviative junk that has grown around the whole Conan mythos, you really have to wish that Howard had lived longer and continued to write more about Conan, although at the time of his death, Howard was moving away from the genre to what he considered better paying markets.I give it five stars because it is in many ways the peak of Howard's writing. And thirty-five years later, I still occassionally pick it up and re-read it, which may say a lot about how well-written it is, since I long ago left fantasy reading behind me.

Published by Thriftbooks.com User , 18 years ago
If you've never picked up the original Conan as written by the incomparable Robert E. Howard, this is the book to read. For those who have never followed the continuity, Conan eventually becomes monarch of the kingdom of Aquilonia in his later years, and it is during this period which this story is set. It involves a plot by a resurrected sorceror to usurp Conan's kingdom, and follows a Conan as he attempts to reclaim his throne, on the way dealing with a savage vampire queen, killer mummies (in a fight scene I would swear was lifted by The Mummy), and a cadre of relentless assassins (in that scene, my favorite of the book, the leader of the seven scarlet robed killers address Conan when they finally catch up with him. There is a long solliloquy in which the assassin details the route they followed to find him - the many near misses, and the hardships they have endured...Conan, not impressed in the least, is already drawing his sword...). This is Conan and Howard at his bloody, barbaric best. Howard's prose is phenomenal. He is not only the grandfather of heroic fantasy, he is in my opinion, the king of action writing. Under his pen bloodletting becomes visceral poetry. The blue eyed black maned giant that is his most famous creation swaggers across these pages like a juggernaut -like Captain Ahab, Tarzan, and the Norse Sagas all rolled into one. Read this and know the wellspring that inspired all those great Frazetta and Jeff Jones paintings...

This book changed the direction of my life

Published by Thriftbooks.com User , 22 years ago
I read this book as a teenager in the late 1950s under the title Conan the Conqueror. This is the same book. Certainly, if one thing set my life on the course it did, it was this book and the man who wrote it - Robert E. Howard. For me to recommend this book is both a pleasure and an honor. Howard's writing and this book fired my imagination and my life. I went on to get a BA in English (concentration in professional writing) and had a 15+ year career as a journalist and editor. Over the years, my copy of Conan the Conqueror has gone the way of all things. I'm ordering a copy of Hour of the Dragon today and will cherish it forever. Hopefully, I can pass on this book and my love for it to my grandchildren and keep the cycle going.

Published by Thriftbooks.com User , 23 years ago
Something's rotten in Nemedia. Once again, con- spirators are plotting against King Conan. These seven men use the Heart of Ahriman to revive the Archeronian wizard Xaltotun of Python, who died three thousand years earlier, in Stygia. By the time King Tarascus and his six other henchmen, including Orastes, realize what's happening, it's too late. Conan's freed by the harem girl Zenobia and heads west to Aquilonia. He meets the witch Zelata and she tells him to find the heart of his king- dom. The Countess of Albia, formerly Queen Marala of Ophir, is ordered to be put to death by the usurper Valerius. Conan, disguised as her executioner, rescues her from the Iron Tower. They're rescued by the priests of Asura. Their leader tells Conan about Archeron and shows him a coin with Xaltotun's image on it. They help Conan and the Countess of Albia escape. Conan returns to Aquilonia and is met by a follower of Asura. Conan asks to see Count Trocero. Conan asks his friend if Poitain's in revolt. Conan sends a message to Xaltotun telling him he's coming after him. By the time Xaltotun lays his ambush for Conan and his army, it's too late. Xaltotun's defeated and sent back to Archeron. Tarascus agrees to send Zenobia to Aquilonia.
Copyright © 2020 Thriftbooks.com Terms of Use | Privacy Policy | Do Not Sell My Personal Information | Accessibility Statement
ThriftBooks® and the ThriftBooks® logo are registered trademarks of Thrift Books Global, LLC