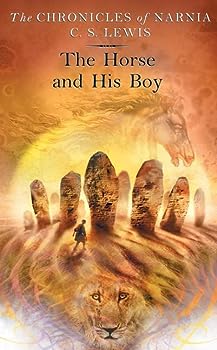 The Horse and His Boy

(Book #5 in the The Chronicles of Narnia Publication Order Series)

A mass-market paperback edition of The Horse and His Boy , book three in the classic fantasy series, The Chronicles of Narnia , featuring cover art by Cliff Nielsen and black-and-white interior... This description may be from another edition of this product.

Published by NurturingMom167 , 2 years ago
Ages 9+. Great story of a poor boy who thought he knew who he was, but through adventure finds out who he really is. The Kings and Queens of Narnia, from Cair Paravel are mentioned, some might show up halfway through the book. The setting is a type of middle eastern, so the culture and speaking might be very different than American culture. If you're interested in the Chronicles of Narnia, the first two books are also written different as the author is from England and the time this was written lends the books to hold a formal and large vocabulary.

Published by Thriftbooks.com User , 14 years ago
C.S. Lewis's magical world of Narnia enchants young readers with its tales about a magical land full of mysterious creatures. He has written seven parts to his famous series "The Chronicles of Narnia"; The Magician's Nephew, The Lion, the Witch and the Wardrobe, Prince Caspian, The Voyage of the Dawn Treader, The Silver Chair, The last Battle, and the book I read was The Horse and His Boy. These seven books have enchanted readers for the last fifty years. Narnia is a fantasy book including animals that can talk, trolls, kings, queens, princes, princesses, and everything else that would leave you starving for more! Shasta is a poor, young boy that doesn't really know where he belongs. A rotten fisherman, Arsheesh, takes care of him. But one day a Tarkaan came and bought Shasta. Shasta soon begins to worry about his future while Arsheesh and the Tarkaan settled for a price. Then the Tarkaan's horse, Bree, warned Shasta that the Tarkaan was wicked and will treat him poorly. Shasta ran away with the talking horse Bree and found himself in an adventure to find a free land named Narnia. Later they meet another talking horse, Hwin, and her girl named Aravis. They too are looking for Narnia and join Shasta and Bree on their adventure. They face lions, Tarkaans, scary crypt, vast cities, spoiled princes and much more. I thought this book was very good. It made a lot of sense and that is good in a book. It also has a wonderful plot that was just awesome. This is a very good book and I suggest it for fifth grade to seventh. But there are a lot of difficult words in this book that you probably won't be able to pronounce.

This book was quite intresting

Published by Thriftbooks.com User , 15 years ago
During the Golden Days age of Narnia when Peter, Susan, Edmund, and Lucy were the rulers of Narnia. A cabreme fisherman named Shasta takes his master's horse Bree. Shaston finds out Bree can talk, and he is not the son of Arsheesh. He meets a girl with another talking horse and rides into Archenland to find who he really is. I thought this book was very interesting and exciting. I read The Lion, The Witch, and The Wardrobe which is the prologue to this book. This book is just as good as the 2nd. If you like Fantasy then this would be an excellent book for you because the land of Narnia is full of talking animals and human/goats! The battle at the Archenland Castle was filled with killing, surprises, and exciting outcomes. If you read this book it would definitely be worth it!

Much Better Then I Remembered

Published by Thriftbooks.com User , 19 years ago
Shasta is about to be sold into slavery when he meets Bree, a talking horse. Together, the two set out for Narnia. But their journey is filled with danger as they are chased by lions. Meeting up with two more travelers, they must get through the town of Tashbaan undetected. That's where they learn of a plot against the rulers of Narnia, Peter, Susan, Edmund, and Lucy. Will they be able to get there in time to sound the alarm?I can remember being disappointed with this book as a kid, mainly because it doesn't involve a magical trip from our world to Narnia and we hardly see the four from the first book. When I sat down to reread it, I found that I had forgotten much of the story, so I was captured anew by these adventures. I found myself reading "just one more chapter" to find out what would happen next. And Aslan's scenes especially moved me as well.If you start this book aware that this isn't your typical Narnia adventure, you're sure to find plenty to enjoy.

Published by Thriftbooks.com User , 22 years ago
Ok, before you even bother reading my review, buy the book (I'll wait here).I hope you bought it. If you haven't, let me tell you why you should: The Horse And His Boy is an outstanding story. And that's not all-you can read it without having read any of the other Narnia books; not that you'd want to do that. All the Narnia books are wonderful. The Horse And His Boy follows the adventures of Bree (a talking horse) and Shasta (a slave boy) who run away from their masters and journey to the magical land of Narnia. Along the way they meet a nobleman's daughter, another talking horse, a king and a queen, and a very special Lion (he's not a tame lion you know). I love this book. I love all the Narnia books. C.S. Lewis is a great writer (now in glory). However, heed this warning: this book is only for children and those adults who are old enough to love fairy tales again. I hope that means you.

The quest to warn Narnia and to find one's origin.

Published by Thriftbooks.com User , 23 years ago
A young peasant boy (with a mysterious past) named Shasta and a talking horse named Bree escape their oppressive land to reach Narnia. They combine forces with a noble girl and her talking horse and discover a plot to conquer Narnia and they are all determined to warn Narnia. In other publications, Lewis had stated that his children's fantasies were just stories, without hidden meanings (I'll always wonder if he said that with tongue in cheek). Yet, one can easily view the lion Aslan as creator, counselor, and savior. This is much more apparent in some of the other volumes in the series. This was the fifth book published in the series and, in my opinion, should be the fifth book read (although others suggest that it be the third book read).
Trustpilot
Copyright © 2022 Thriftbooks.com Terms of Use | Privacy Policy | Do Not Sell or Share My Personal Information | Accessibility Statement
ThriftBooks® and the ThriftBooks® logo are registered trademarks of Thrift Books Global, LLC