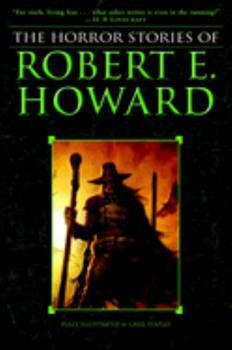 Here are Robert E. Howard's greatest horror tales, all in their original, definitive versions. Some of Howard's best-known characters--Solomon Kane, Bran Mak Morn, and sailor Steve Costigan among them--roam the forbidding locales of the author's fevered imagination, from the swamps and bayous of the Deep South to the fiend-haunted woods outside Paris to remote jungles in Africa. The collection includes Howard's masterpiece "Pigeons from Hell," which...

Published by Thriftbooks.com User , 13 years ago
You get what you pay for with this good collection of suspenseful and horrifying fictions. R. E. Howard knew precisely how to get one's blood pumping and how to freeze it in the veins.

Published by Thriftbooks.com User , 13 years ago
I am almost through this marvelous collection of Howard's horror tales. What a ride. Howard writes with compelling swiftness, leaving you hungry for more. In this collection you will find horror stories of all stripes: sword and sorcery, Solomon Kane, weird westerns and more. Some stories, as they were written in the 1930s, will be troubling to those of a politically correct nature. At the same time, they are absent of modern exploitivness present in today's horror tales. 5 stars.

Howard Was a Master of Horror as Well!

Published by Thriftbooks.com User , 13 years ago
We all know Howard as the creator of Conan, Solomon Kane, King Kull and the virtual creator of Swords & Sorcery. But Howard was also an accomplished horror writer. As a friend of H.P. Lovecraft, Howard created his own Cthuhlu Mythos stories for pure horror tales, and also frequently incorporated the concepts into his fantasy tales as well. Howard's horror tales are usually quite short, 8 - 12 pages and are often told in first-person perspective. Howard's horror tales are remarkably diverse; from gothic European style stories to the dark folklore of the Deep South, and everything in between. Howard touches on concepts created by the great Welsh writer Arthur Machen about ancient mythological, long forgotten, in tales like "The Little People" and "People of the Dark". He offers his own take on Lovecraft's Cthulhu Myhos in "The Black Stone", "The Haunter of the Ring", and "The Thing on the Roof". Some of these stories feature his well-known characters such as the Puritan adventurer Solomon Kane who battles voodoo in "The Hills of the Dead". If you only know Howard as the creator of Conan, you must check this book out to see just how talented a writer he truly was. These are fantastic and underrated horror stories from a master!

THE SCARIEST BOOK YOU'LL EVER READ!!!

Published by Thriftbooks.com User , 13 years ago
This book is outstanding has more than 50 hair raising stories and 523 pages of pure terror! Robert E. Howard is best known for writing Conan, Kull, Bran Mak Morn, Solomon Kane and other famous characters. I was elated to get this book as there are some stories I've never read before! The most chilling story that gave me nightmares is Pigeons From Hell. Read it late at night by candlelight and if you here someone whistling - it's too late! The Stranger on the Ground got to me, too. They're all excellent! Check out the REH Foundation & Forum.

A last! A big book of REH horror!

Published by Thriftbooks.com User , 14 years ago
Here, at last, is a hefty trade edition containing the bulk of Robert E. Howard's horror stories. Best known as an author of heroic fantasy, Howard was also a most able practitioner in the horror genre. The stories assembled here have heretofore been scattered about in a number of mass market paperbacks over the last forty years--two or three stories here, a half dozen or so there. It is indeed a blessing to get them all between two covers in a quality edition. Here is a volume that belongs in the core collection of every serious horror enthusiast. Howard's horror stories fall roughly into several categories based on theme and setting. There are those with a regional southwestern setting ("The Horror from the Mound," "Old Garfield's Heart") as well as others set in the haunted piney woods region of the deep South ("Pigeons from Hell," "Black Canaan"). Memorable stories with a Celtic backdrop include "The Cairn on the Headland" and "Dermod's Bane." We also find tales of the horrid "little people" that abound in Celtic lore. Stories utilizing Lovecraft's Cthulhu Mythos include the memorable "The Black Stone" and adventures of occult researchers Conrad and Kirowan. Sometimes these categories overlap: "The Valley of the Lost" is a little people story with a US southwestern setting, for example. Howard enthusiasts will debate, as we are wont to do, some of the inclusions and omissions to this volume. "Worms of the Earth" has already appeared in TWO other Del Rey Howard volumes. But then it is arguably Howard's finest story, and I dare say as good as any story written. It deserves to be as well known as "The Fall of the House of Usher" and "The Dunwich Horror." I wish I could get as excited over "Rattle of Bones," however. STORIES I WOULD LIKE TO HAVE SEEN INCLUDED: "The Hyena" was the first horror story Howard sold to Weird Tales (the first horror story he sold anywhere, for that matter). It forshadows the controversial "Black Canaan" in the sense that supernatural horrors reflect racial and sexual tensions. "The Moon of Zembabwei" and "Black Hound of Death" are two good "piney woods" stories that were left out, but the "piney woods" story is still well represented here. "Black Wind Blowing" was one of Howard's contributions to the "weird menace" or "shudder" pulps; the plot is outlandish, but the atmosphere of horror and impending doom is impressive. "The People of the Black Coast" is Howard's most Lovecraftian tale in some respects. Note that I said "Lovecraftian", NOT "Cthuloid." There's no Von Juntz, no Nameless Cults, none of the Mythos trappings, just a stark depiction of hapless humans as the prey of utterly alien but superior beings. "The People of the Black Coast is as much science fiction as horror, but then so is Lovecraft's "At the Mountains of Madness." I thought the books illustrations were very nice, and as always Rusty Burke provides an informative introduction. In a world where contemporary horror is presently dominated by chi
Trustpilot
Copyright © 2022 Thriftbooks.com Terms of Use | Privacy Policy | Do Not Sell or Share My Personal Information | Accessibility Statement
ThriftBooks® and the ThriftBooks® logo are registered trademarks of Thrift Books Global, LLC