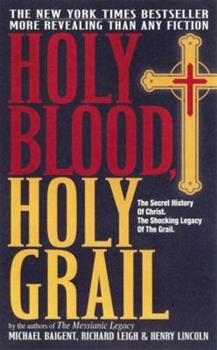 For thinkers, this is better than the Da Vinci Code

Published by Thriftbooks.com User , 15 years ago
My God, they've got this book at Costco! A few years ago this book was either in your bookstore or easily ordered therefrom. Now it's in more bookstores than at any time since its first publication in 1982, and the three authors have Dan Brown to thank for this new exposure. It's a sort of Fahrenheit 9/11 for the New Testament. This is the book that The Da Vinci Code was based on. This is the controversial, if scholarly, tome that Mr. Brown pillaged to come up with his Ludlum-like tale of mystery, conspiracy and action-packed adventure. It's a better, more mysterious, more thought-provoking, more conspiracy-laden and infinitely more adventurous book. But it'll take a bit of the old concentration to read it. Also, it's not for the timid of outlook. Holy Blood, Holy Grail opens in a remote, nondescript parish in southern France in 1885. An unheralded priest had just been assigned to 200-person Rennes-le-Chateau and was poking around his crumbling church and uncovered some documents that puzzled him enough to send them to his Bishop for explanation. The Bishop took a look at them and immediately sent the priest, with the documents, to the Vatican, where the papers have remained, unpublished and un-acknowledged to this day. The priest was sent back to his parish whereupon the Vatican curiously sponsored a million-dollar renovation of his building. Nothing was ever revealed about the content of the documents. The quest began in 1969 when one of the authors, Henry Lincoln, casually purchased a tract with the astonishing story. He became intrigued, and followed the story until it got too deep, and he attracted two more journalists, Michael Baigent, and Richard Leigh, to the quest. What ensued was a complex retracing of a history that has seen war, controversy, conspiracy, and duplicity as well as greatness in art, thought and literature, and what unfolded was so dramatic and so powerful, that it was difficult to believe. Did Jesus Christ really die on the cross? Whether or not, did he leave behind a line of progeny? Was it the lineage of Christ that is the Holy Grail sought by so many for so long? What was the Grail? That alone is the subject of more books than could fit onto a shelf in your bookstore. The Crusades? In the book. The Mystery of the Knights Templar? In the book. Secret societies? In the book. Lost treasure? In the book. Christ as a Buddhist? In the book. Okay- about that last one: one of the "lost" books of the Bible discarded by the Council of Nicea shortly after Emperor Constantine's conversion (also: in the book!) was the book of Thomas. Long thought lost until its re-discovery in the desert in the 1940's, Thomas talks of a Jesus who felt that individuals could find God in their own way, which the early Church thought would cut down on devotion and contributions and decided to "disappear" it. So much of what you were taught or thought you knew about the time of Jesus is re-analyzed and explained so

Well, at least it is entertaining...

Published by Thriftbooks.com User , 17 years ago
First off, I have never read "The Da Vinci Code." Let's get that out of the way right from the start since it seems most people who read "Holy Blood, Holy Grail" did so because of the enormous popularity of the Brown book. No, I read "Holy Blood" because I love reading about conspiracy theories--UFOs, the Kennedy assassination, Britney Spears's success--anything that concerns the unexplainable. I actually came across this title about six years ago when I was reading several books about British Israelism, and only recently picked it up after accidentally stumbling over it on one of my Internet excursions. When I began describing the contents of this book to a family member, she quickly mentioned "The Da Vinci Code." I now see that Brown's book apparently borrowed its plot from "Holy Blood, Holy Grail," thereby bringing this esoteric theory about Christ, the Merovingian dynasty, and Mary Magdalene to a new generation of readers. I will say that Baigent's book is the grandest conspiracy theory I have ever read. There are conspiracy theories, and there are CONSPIRACY THEORIES. "Holy Blood, Holy Grail" is the mother of all conspiracy theories; fifty stories tall and decked out in neon letters with sprinkles on top. If any of this is true, western civilization as we know it is undone.The mystery examined in this book first came to public attention roughly a century ago, when an obscure French priest named Berenger Sauniere assumed his post in the village of Rennes-le-Chateau in Southern France. The priest uncovered some ancient, mysterious documents in an abandoned church near his village. Intrigued, he took them to the local bishop, who then instructed Sauniere to head to Paris and consult some "experts" there. When the priest returned to Rennes-le-Chateau, things were definitely different. He suddenly had at his disposal millions of francs, leading to several extensive and bizarre building projects in the area. When the Catholic authorities questioned his expenditures, Sauniere brazenly defied the inquiries. Surprisingly, the Church did nothing to the man even though he was a lowly priest. Moreover, he often received visits from Parisian bigwigs, people a man in Sauniere's position couldn't possibly know. When the priest died his secret apparently died with him. Or did it? Not according to the authors of "Holy Blood, Holy Grail." Taking the Sauniere mystery as a starting point, the book proposes a shocking theory about the very origins of Christianity and nearly every secret society during the last 1000 years.By looking at such diverse historical events as the Albigensian heresy, the Crusades, Freemasonry, and Christ's crucifixion, "Holy Blood, Holy Grail" posits that Berenger Sauniere discovered documents referring to a mysterious secret society called the Priory of Zion, an organization composed of elites in European society who believe that Jesus Christ was married to Mary Magdalene, fathered children, and probably didn't die on the cross. Instead

fact, fancy, or something else...?

Published by Thriftbooks.com User , 17 years ago
When my mother gave me this book, saying she could never take communion again, I was shocked. When I read the introduction, I was intrigued. When I began reading in earnest, I was enthralled...Could Jesus have actually been married, fathered a family, and had them escape the Romans?Fantastic, crazy, UNORTHODOX, yes- but could it be true, and does it MATTER? Since we were small, we have been told that Jesus was a poor, gentle peaceloving, almost non-Jewish Jew(after all, Hollywood has always gone to great lengths to make him look positively gentile), who allowed himself to be murdered by the Romans with barely a whimper, and that Mary Magdalene was a prostitute that inhabited the periphery of the very male world of first century Palestine.But what if we look at the story from a truly historical perspective...The region was swollen with fundimentalists, not unlike the Islamists we face today, and Jesus would have been a very orthodox Jew. Perhaps his story has been filtered over the centuries so that it is no longer recognizable...And nowhere in the Bible does it refer to Mary as a prostitute- historians are begrudgingly now laying this interpretaion at the feet of a chauvinistic revisionist church- is it so unlikely that a woman in the company of a group of men traveling throughout the Holy Land, would have been married to one of those men? And why would it have been so unlikely that that man was Jesus? After all, a man of Jesus' age would have been looked upon with suspicion if he was NOT married...Ah, the historical possibilites!Link these intrigues with the Knights Templar and the mystery of their origins and purpose, the secretive Prior de Sion and a strange priest who was able to face down the power of the Catholic Church after the discovery of a secret in the mountains between France and Spain, while he amassed a fortune and built a tower dedicated to the Magdalene- put all this together and you have a yarn that will grip the heart of any mystery buff, history fan or conspiracy nut!True- I don't know.Plausible- yes...just plausible enough to make you look at history and religion from a new perspective, and perhaps make communion impossible.

The One that started it all

Published by Thriftbooks.com User , 20 years ago
Anthony Burgess described this book as a wonderful basis for a novel. He was right, but what sort of novel? It is part mystery, part thriller, part historical, and totally rivetting from page one. This "novel" has the greatest twist of them all. It could al be true. The general "plot" is that a mystery concerning a valuable treasure in the South of France slowly unfolds to reveal an ongoing campaign to get a new, truthful, version of history accepted. A version of history that suggests Jesus did not die on the cross, but survived, married and founded a dynasty that has played a major role in the events of the European stage and beyond. The Holy Grail is said to be this truth that has been kept secret by vested interest groups including the Catholic Church. The story could be true, all speculation engaged in by the authors is grounded in the many facts they produce. The quest for the grail is, however, given a new form by the authors, in that they find their own lives changed by the efforts of the research itself. Many other lives have been changed too. This book has spawned a small industry of books and souvenirs adding to or modifying the basic plot. In the final analysis I would say this book is "the stone at the head of the corner" of the ultimate Post-Modernist novel, a novel with a basic storyline that can be taken up and modified by everyone with a will to try. It is written by many authors from many countries, and may still have many plot twists left. Who knows, read this book and you may be inspired to be the author of the next dramatic sequence.

A terrific exploration of an ancient religious mystery

Published by Thriftbooks.com User , 24 years ago
Holy Blood, Holy Grail is a clever, thought-provoking book that will get your blood boiling if you're a Christian fundamentalist. The authors create a wonderful story by tying together some of the world's greatest religious mysteries (the historical Jesus, the Crusades, the Knights Templars, the Albigensian heretics, and Freemasonry). You'll have to decide for yourself the accuracy of their theory. In a nutshell, the authors argue that the Holy Grail was the bloodline of Jesus, descendant of King David, which was carried out of the holy land in the form of Jesus' wife, Mary Magdelene, and which survives today in the noble houses of European aristocracy. Don't scoff at this idea, because recent Dead Sea Scroll scholarship (see Barbara Thiering) lends credence to much of the story. Even if you don't believe the premise, you'll find this book hard to put down
Copyright © 2020 Thriftbooks.com Terms of Use | Privacy Policy | Do Not Sell My Personal Information | Accessibility Statement
ThriftBooks® and the ThriftBooks® logo are registered trademarks of Thrift Books Global, LLC