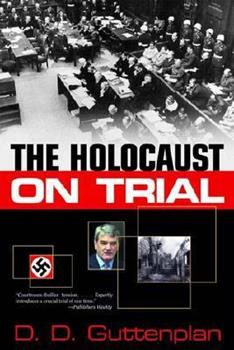 The Holocaust on Trial

D. D. Guttenplan's "The Holocaust on Trial" is a bristling courtroom drama where the meaning of history is questioned. The plaintiff is British author David Irving, one of the world's preeminent military historians whose works are considered essential World War II scholarship and whose biographies of leading Nazi figures have been bestsellers. Irving refuses to admit to Hitler's responsibility in the extermination of European Jewry, replying that...

Published by Thriftbooks.com User , 12 years ago
This book is the best account of the Holocaust trial that exists, and will be forever the book of record; but in addition it is fascinating, often exciting. It is a very, very good book. Ian Shine, author Thomas Hunt Morgan, Hidden Letters.

Published by Thriftbooks.com User , 20 years ago
Over Christmas I took this book and "Lying about Hitler " by Professor Richard J Evans with me to read whilst on vacation. I also had with me a copy of the judgment delivered by Justice Charles Gray in the case: "Irving v Lipstadt and ano." Whilst on vacation, other members of my household " looking for something to read " picked out this book for perusal. As a result I now find that most of my library on the Holocaust has disappeared and I have had a number of rivetting discussions with younger members of my household who have become interested in the Holocaust as a consequence of reading this book. It is important to acknowledge what this book is not. I suspect the book has been deliberately called " The Holocaust on Trial" rather than " The David Irving Trial". Whilst much of the book provides an entertaining description about the David Irving trial the book does not investigate the primary source material of the trial itself. American readers may not be familiar with a tradition of English trial reporting as in such series as Notable British Trials . In those books extracts from the transcripts, speeches by Counsel and final judgment are reproduced. You will not find that type of detailed treatment here. What you will find, however, is sufficient information for the lay reader to understand the issues that were involved with the trial.What the book does provide, however, are thought provoking questions about the Holocaust, about the study of history and the application of the law to resolve complex historical disputes. These questions, which must have been formulated by the author after much thought and research, are in my view the great strengths of the work. One of the earlier reviewers suggested that the David Irving trial will not be relevant in 10 years time. That might be so but I suspect that the questions asked by Mr Guttenplan will remain relevant a century from now.Another reviewer was critical that Mr Guttenplan did not deal more extensively with the questions raised. The author has been careful to identify the origins of his questions. If the reader so desires the reader can investigate further using the information the author has provided.The other members of my household who have also read "Lying about Hitler" by Richard Evans and "The case for Auschwitz" by van Pelt have nominated this book to be the best of the three. This book therefore appears to be a good entree for the novice to understand the issues involved with the Holocaust debate and the David Irving trial.What I admire most about the author is his courage in acknowledging that some sections of the Jewish community have exploited for their own purposes the memory of the Holocaust. One rarely sees comments like this committed to print.A test I sometimes use to rate a book is to ask myself: `would I ask the author to a dinner party - is the author that interesting ?' In this case the answer would be a resounding yes!

A Spectatorï¿½s View Of The Irving Trial

Published by Thriftbooks.com User , 20 years ago
?Lying About Hitler?, by Professor Richard J. Evans was the first book I read regarding the trial of David Irving. Professor Evans was part of the defense team, and he prepared a sweeping indictment of David Irving and his writings that were an integral part of Irving losing the suit he had brought. Mr. D.D. Guttenplan author of, ?The Holocaust On Trial?, describes himself as a reporter. This man was not only present at the trial, but on several occasions spoke with David Irving, and was allowed access to his files. The idea that a trial was needed to prove that the Holocaust did take place despite the writings of the rabid anti-Semite David Irving is almost beyond belief. I highly recommend both of these books, for while they cover the same event, the first is from a participant, while the second is from an observer.Mr. Guttenplan does much more than report on this trial. He takes the reader through the difficulties of why proving history is so difficult. The idea of proving historical events, especially one as prominent as the Nazi Programs of WWII seems absurd. Absurdity is quickly dismissed when a judge is brought into a courtroom along with history, and the record of past events must meet legal thresholds. Again this would seem to be an astonishingly easy case to make; however the opposite is true.Eyewitness survivors were never put on the stand, for a legitimate lapse in memory of whether a set of doors open inward or outward can mean the difference between documenting an accepted fact, and stating an error that is meaningless in the eyes of anyone except those that exploit these issues to place widely held, accurate beliefs into question. These are the deniers of history, the intentional revisionists like David Irving who either takes pieces of information and presents them in a distorted manner, or when there is nothing to distort, he and his like will fabricate whatever lies are necessary to falsify history in the hopes of sensationalizing their works of fiction and the sales thereof. The trial exposed David Irving for what he is, a self-promoting anti-Semite, who while having excellent secretarial skills and a man who has amassed prodigious records, is still, in the end nor more than a anti-Semite and a historical hack.Mr. Guttenplan also raises and discusses other issues that are sure to be controversial with some people. He raises some consequences that occur when a group becomes defined by a single event, and when the same group selectively includes their group as victims while not mentioning the others that shared the same fate. History needs above all to be accurate, and the fact that the number of non-Jews killed in camps is measured in 7 figures is no less important a matter than the number of Jews who perished. That the intent to destroy the Jews as a people is historically accepted, was unique, and especially depraved. Some estimates state 20 million civilians died during the war, all must be remembered, and to do so in no way

Published by Thriftbooks.com User , 21 years ago
Guttenplan's book is a fast-paced, highly illuminating account of the David Irving-Deborah Lipstadt libel trial. The defendant, Lipstadt, emerges as a lackluster minor character in these pages. At the heart of the narrative is the fascinating, grotesque figure of David Irving, who is both a distinguished military historian of World War II (John Keegan and Gordon Craig figure among his admirers) and a man determined to prove, through rhetorical somersaults and diabolical logic, that the gas chambers were a fiction. Arrayed against Irving in court were a distinguished group of scholars and lawyers--all of them finely rendered by the author--who were forced to prove, in painstaking detail, the factual basis of Nazi genocide. Guttenplan's brisk narrative, which strikes a perfect balance between detachment and passion, expertly juxtaposes courtroom drama with philosophical and historical ruminations on the crime of the century. His book is an essential contribution to the literature of the Holocaust, but also a major addition to the canon of literary journalism."

"The Holocaust On Trial"--The Imperative of Truth

Published by Thriftbooks.com User , 21 years ago
D.D. Guttenplan's "The Holocaust On Trial" is an insightful and well-written account of the David Irving--Deborah Lipstadt libel case. The story of the trial would be reason enough to buy the book--this is one of the best descriptions of a real-life legal proceeding that I have ever read. Guttenplan has a good reporter's ability to bring the setting and personalities to life so that the inherent drama of the trial holds the reader's interest throughout. But of course, this was no ordinary trial. Irving is the author of several books about World War II that some reputable historians have praised. He has long argued that while some "atrocities" were inflicted on Europe's Jews (as they were also visited upon Germans), Hitler did not order any genocide of Jews and Jews were not systematically gassed at Auschwitz. When American scholar Deboral Lipstadt called Irving "one of the most dangerous spokespersons for Holocaust denial," Irving sued Lipstadt for libel in England, where libel plaintiffs enjoy many advantages. Lipstadt and her publisher were forced to spend millions of dollars in a high-risk effort to prove that Irving was a liar and not just a historian with controversial views. It is here that "The Holocaust On Trial" becomes much more than another good book about an interesting lawsuit with intriguing characters. As Guttenplan explains so well, the trial raised profound questions about the meaning of history and the ways in which the Holocaust has been remembered and understood as well as the ways in which it has been misrepresented and exploited. It is a remarkable accomplishment that Guttenplan has compelling and thoughtful insights into the Holocaust-- a subject that on the one the one hand is so enormous and profound as to defy representation, and on the other hand has been so written about, depicted and analyzed that one picks up another book wondering if anything new can be said."The Holocaust On Trial" meets that exacting test on many levels--as a chronicle of a compelling courtroom drama, but more importantly as a meditation on the enduring impact the Holocaust has had on our culture. I was particularly impressed by Guttenplan's sense of the humanity of the Jewish victims of the genocide and his ability to make the reader appreciate them as human beings rather than abstractions. We honor the victims of the Holocaust above all by remembering what happened with unsparing honesty. "The Holocaust On Trial" eloquently demonstrates that this difficult goal is a moral imperative. It is a valuable contribution to the literature of the Holocaust and I highly recommend it to anyone interested in historical truth and the sacrifices that are sometimes required in the service of that truth.
Trustpilot
Copyright © 2022 Thriftbooks.com Terms of Use | Privacy Policy | Do Not Sell My Personal Information | Accessibility Statement
ThriftBooks® and the ThriftBooks® logo are registered trademarks of Thrift Books Global, LLC