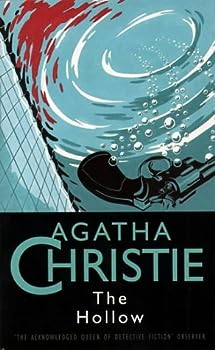 (Book #23 in the Hercule Poirot Series)

Agatha Christie's classic, The Hollow , finds Poirot entangled in a nasty web of family secrets when he comes across a fresh murder at an English country manor. A far-from-warm welcome greets Hercule... This description may be from another edition of this product.

Published by Thriftbooks.com User , 13 years ago
Loved it! At the end of the 7th chapter I thought I knew who committed the murder; a couple chapters later, I was sure; but then every chapter after made me question my intuition and look at every single character!!! I will say my first impression was right, which is very very rare with Christie's books. I've read between 30 and 40 of her books and never cease to be fascinated by how intricate she weaves her webs.

Published by Thriftbooks.com User , 18 years ago
The Hollow is an affecting and taut mystery in which the best of the Poirot novel elements are happily combined. The characters are among her most developed and she does her usual good job of demonstrating the impact of the changing post-war society on their personalities. Their motivations are murky, and none of them are particularly innocent. The moral ambiguity that marks this book adds a dose of depth that some of the lesser Christie novels lack. Also titled as Murder After Hours in some editions. Recommended for Christie fans, or mystery fans new to her work.

The subplots are more affecting than the main storyline.

Published by Thriftbooks.com User , 18 years ago
THE HOLLOW is one of Agatha Christie's best postwar thrillers when she seemed to be trying out a new style of close psychological observation, a very delicate kind of character portrayal that was a carryover from her "straight novels" written under the pseudonym of Mary Westmacott. Another good example of this postwar style would be TAKEN AT THE FLOOD. I loved the story of Henrietta, one of Christie's few female visual artists, ruthless and driven, like Amyas Crale in FIVE LITTLE PIGS, always sacrificing everything to the good of their art, even their most basic human relationships. Over and over again Christie uses this theme, and I suspect she must have somehow identified herself with this driven artist figure. The other story that is so appealing is the love story of Midge Hardcastle, the "poor relation" of the Angkatell family, who gets to spend her weekends and holidays at the family mansion, but when the weekend's over, she has to go back to her life of genteel poverty selling clothes for a fashionable modiste who values her only for her society connections. No matter how many times I read THE HOLLOW, my throat clenches up when I reach the richly satisfying end of the book, when poor Midge gets her Cinderella wishes granted. It's very affecting, just like the end of AN OFFICER AND A GENTLEMAN. Veronica Craye is very good too. Obviously Christie was using the real life Veronica Lake as the model for Craye, just as in the 1960s she used the real life Gene Tierney for the actress in THE MIRROR CRACK'D. All in all, a book filled with wonderful female characters. Though the men aren't bad either!

Murder At A Cozy English Houseparty Is Excellent Christie

Published by Thriftbooks.com User , 21 years ago
Agatha Christie again does what she does best: gathers a group of diverse characters at a country estate, provides motive and opportunity for each of them to commit a murder, and then allows a murder to occur.The setting for "The Hollow" (also published as "Murder After Hours") is the home of Sir Henry Angkatell and his fascinating wife Lady Lucy Angkatell. A weekend houseparty launches the mystery to which Hercule Poirot, a neighbor who has a weekend cottage nearby, has been invited. Also present are: Henrietta Savage, talented young sculptress; Midge Hardcastle, poor relation who works in a dress shop; Edward Angkatell, shy bookworm in love with Henrietta; David Angkatell, a university student; Dr. John Christow, long-time friend of the Angkatells and lover of Henrietta, and Gerda Christow, John's wife. When Poirot arrives for the weekend, he first enters the swimming pool area where a body lays. Nearby is a person holding a revolver. Sounds simple, but appearances are often deceiving. Christie once again gives us another variation on the most likely person being guilty in the brilliant fashion that only she can. She never runs out of surprise endings, and this is one of her finest.

Published by Thriftbooks.com User , 22 years ago
Superb. The characterizations are much deeper than is usual in Christie, and to a great extent, it is character that leads to the solution here. There are clues, of course, but it is in reading the dialogue and the characters' thoughts that we have the best chance at solving the puzzle. It is true that Poirot is a bit superfluous here; the story works equally well without him (Christie removed him when she wrote the play), but if his presence does not add anything, neither does it detract from the effect of this unusually constructed and deeply moving story.
Trustpilot
Copyright © 2022 Thriftbooks.com Terms of Use | Privacy Policy | Do Not Sell or Share My Personal Information | Accessibility Statement
ThriftBooks® and the ThriftBooks® logo are registered trademarks of Thrift Books Global, LLC