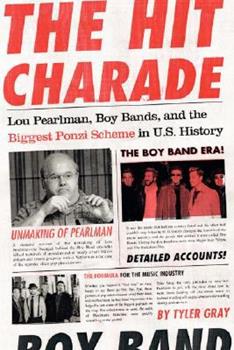 Tells the story about how Lou Pearlman went from fending off star-struck teens to instead warding off angry investors demanding money and answers as well as the persistent rumors about alleged inappropriate relationships with his young boy band members. This book takes readers through the journey that caused his real and phony worlds to collide.

Published by Thriftbooks.com User , 14 years ago
The saga of Lou Pearlman will eventually occupy a prominent chapter in any book on the greatest ponzi schemes of the 21st (and late 20th) century. It is downright fascinating how a man like Pearlman could not only bilk some many people out of Millions but also somehow manage to break in the music industry as a novice and churn out acts like the Backstreet Boys and *NSYNC. This is one of those books you just won't be able to put down. Tyler Gray does a very good of researching the history of Pearlman's business endeavors and the cast of characters that always hung around him. While the beginning part of the book is a tad slow, the story just soars once he shows how Pearlman broke into the music business, and then how his empire falls apart in 2005 and 2006. My only slight critique of this book is Gray's reluctance to confirm stories about Pearlman's homosexual proclivities. Bryan Burrough's 'Vanity Fair' article on Pearlman did a much better job of discussing this and for whatever reason, Gray seems hesistant to tackle this issue. While this doesn't take away from the main story, it is definitely an interesting aspect that should have been explored more fully. Regardless, this is a superb piece of investigative journalism and a downright fascinating look at a multi-decade Ponzi scheme.

Published by Thriftbooks.com User , 14 years ago
I am from Orlando and I thought that I had an inside track on Pearlman, and what he was all about. As is the case with many people from Orlando, I know someone who was in business with, and got screwed over by Lou. After reading this book, I realize that I only knew the tip of the highest snowflake, on the tallest iceberg, that was Lou Pearlman. Often in cases like this, an author will try to pinpoint a time or event where the subject took a turn for the worse. Not Tyler Gray, by this omission he underscores the fact that Lou never had any good intentions, and that all of his efforts were driven by greed and deceit. The author has a relentless dedication to detail and timeline, which leads the reader through Lou's upward, as well as, downward spiral. It is truly a crazy tail of someone who had it all (read: NEVER had it all, but made people believe that he did, so that they would give him money) and lost it.

Published by Thriftbooks.com User , 14 years ago
Tyler Gray had a lot of information to work with to unravel the twisted story of Lou Pearlman in "Hit Charade." As one of the contributors to this tome, I realize that I never could have pulled it all together the way the author did. Gray cleverly used Lou Pearlman's "Bands, Brands, and Billions" as a base to discover the truth behind Pearlman's egocentric ramblings and faux rules of success. He shows how Mr. Pearlman's historical review of his career was a series of lies built upon lies. Many of Pearlman's stories were true, however they belonged to his associates and not to his own imaginary life history. Gray had to filter the facts from fiction and he spoke with many people who were involved with various stages of Pearlman's life from childhood to his incarceration. The book examines how Pearlman used Mission Impossible-like scenarios in order to deceive the people who believed in him most, his family, friends, and business associates who suffered great losses (and not just financially). What is even sadder are the stories of elderly investors who lost their life savings to a phoney investment plan that should have been questioned a lot earlier. The successes that Pearlman had with boy bands masked the fact that he was building a house of cards that was bound to crumble sooner or later. Too bad it couldn't be sooner! The book appeals to a wide audience, including those who are fans of boy bands, financial manipulations, and behind the scenes revelations. Personally, when we were growing up, I looked at Lou as the little brother that I never had (we were only children in an apartment building where everyone else had a sibling). I wish that my attempts to keep him in line met with success but he stubbornly had to have it his way.

Published by Thriftbooks.com User , 14 years ago
Tyler Gray has penned a page burner with his new release "The Hit Charade" I found myself glued to his book and ignoring commitments and chores to devour the 278 pages in their entirety. Finally flipping the last page and letting out a big last gasp as the weight of Pearlman's relentless financial piracy sank in and hit me hard in the heart as I felt for Pearlman's victims and their losses. Amidst all of the juggling of figures, and finances, and false fronts, Gray laid the groundwork for the reader to fully realize the poison that came from the bite of this snake in the grass. Tremendous reporting of fact finding amongst the tall-tales of Pearlman from self made Lemonade Mogul/Newsie to riding his fleet of Busted Blimps to Boy Band Impresario. The biggest thing to note reading about the scheming Porkers life's work, was just how easy Gray made it to wrap my head around such a complex ruse that was Pearlman's "Ponzi Scheme", and how easily digestible he kept it all, without the feeling that the complexities of the ins and outs were being dumbed down for ease of consumption. A well crafted thorough walk in the shoes of a scum-bag schemer. A sometimes eerie read amidst all of the financial turmoil and Wall Street finger pointing happening, as I realized that this gargantuan liar that was Pearlman, squandered so many fortunes in front of the hot-lights and spotlights of media; with nobody the wiser till it was too late. I closed the book scratching my head and wondering how could this happen? How could this be done unnoticed? Who could do such a thing? Gray avoids speculation as to the motives of Pearlman, and delivers the goods so readers can do their own soul searching as to why another human could intentionally murder the financial lives of so many. It just plain read well. Tyler Gray's "The Hit Charade" took me on a walk around a carefully constructed web of lies and kept the balance while delivering the facts amongst the spins and yarns that fell from the chubby faced fake. In the end, with all of Pearlman's pandering to be dubbed "papa" by his victims the only thing he managed to father were his lies. Take a bow fat man.

Published by Thriftbooks.com User , 14 years ago
I'm always one who loves a good quick read and Gray delivers with Hit Charade. While you may find the topic to be a mishmash of odd subjects - who can understand a ponzi scheme?? - the author's writing style makes it fun and understandable, and in the end it's really more about the man and why and how he bilked thousands of people out of millions. Not to mention the chapters about how Pearlman came to build the empire we know as boy bands.... I read the whole book quickly..within a span of days. Once you start, you dont want to put it down. Whether it's reading about Pearlman's failed blimp business (yes, you read that right) to differing accounts of whether the felon actually wrestled nude with his boy band charges, it's all told in a voice that compels you to turn the page.
Trustpilot
Copyright © 2022 Thriftbooks.com Terms of Use | Privacy Policy | Do Not Sell My Personal Information | Cookie Preferences | Accessibility Statement
ThriftBooks® and the ThriftBooks® logo are registered trademarks of Thrift Books Global, LLC