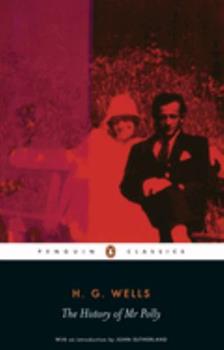 The History of Mr. Polly

Mr Polly is an ordinary middle-aged man who is tired of his wife's nagging and his dreary job as the owner of a regional gentleman's outfitters. Faced with the threat of bankruptcy, he concludes that the only way to escape his frustrating existence is by burning his shop to the ground, and killing himself. Unexpected events, however, conspire at the last moment to lead the bewildered Mr Polly to a bright new future - after he saves a life, fakes his...

Published by Thriftbooks.com User , 15 years ago
This one came out of nowhere. An absolutely brilliant comic novel. Like all great comic novels, it's never patronizing. Though the narrator places himself at a distance from Mr. Polly, he's never condescends. The tone is warm and witty, genuinely moving rather than sentimental. It's an honest look at the middle class, cased in a Romantic (as in Knights and Quests) narrative. Really, really great. Definitely worth your time.

Published by Thriftbooks.com User , 18 years ago
The climactic and hilarious confrontation between Mr. Polly and the low-life ruffian Uncle Jim is so masterful that one might forget all the other comic gems included in this novel. At the same time, the reader will feel the power of Wells' legendary intelligence on every page. The History of Mr. Polly is loaded with thought-provoking observations on the topics of marraige, love, business, education, friendship, insurance fraud and -- most of all -- happiness.

Published by Thriftbooks.com User , 20 years ago
A friend recommended this book to me after I explained how much fun I was having after leaving work in DC, returning to Minnesota, playing with my kids, joining a mountain biking team and genuinely enjoying my unemplyed status for 9 months. She said it was a philosophical book.I spent the entire book trying to figure out why she thought of this book after I got through telling her how great my life was at the present. Mr. Polly clearly was not living a great life and always seemed to be on the wrong side of circumstance. It wasn't until the very end of the book that I realized the context my friend applied to my happenings.The book, for it's strange accents and period vocabulary, was as riveting as any Grisham or Baldacci novel. I don't really know why - but it was. And the last few pages makes one think very hard about the meaning of life, which even for an unemployed child-at-heart, is important to do now and again.

Published by Thriftbooks.com User , 20 years ago
I finished reading this novella a few days ago. I must first admit that for the first 25 or so pages, I wasn't particulaly tuned into what the book was about. It is, as Wells mentioned, a history, so I was rather thrown at the beginning. Once I got the gist of it, particularly the gist of Mr. Polly and his eccentricities, I thoroughly enjoyed this book. The only other Wells book I had read was the Island of Dr. Moreau, which, like his other romantic science-fiction novels he is famous for, was somewhat plot-driven rather than character-driven. This book, is, as the title would lead you to suspect, character-driven. We begin our read with the bored, frustrated Mr. Polly, what he is feeling and how he deals with his life in general. Then the actual history starts, and Wells's beautiful, if somewhat excessive vocabulary answers the reader's question of who this Mr. Polly is. I found him to a be a very refreshing hero, being rather ordinary, and dealing with the concerns of anyone's life, particularly that of a middle-aged man. He does not "save the day" by perfoming any conventional (or even moral) acts, but this only makes him more real. Mr. Polly's passion for epithet is absolutely delightful, and gave me a great sense of pleasure to watch him go about his transformation.This was a terriffic, merry little book, with a central character worthy of some of the finest in literature, at least from the limited literature I have read. Don't be fooled by the humorous facade however; there is a deeper message, one which will become relevant at some time in all our lives. It isn't one of Wells's most well known books, but it should be. A superb little gem.

Superficially Comic but Grim and Hopeless Beneath

Published by Thriftbooks.com User , 21 years ago
Mr.Polly is one of H.G. Wells' novels of contemporary society, albeit with a comic dimension, detailing the escape of an archtypical "little man" from a life of quiet desperation. It is splendidly read by Clive Swift, an inspired choice, who by his voice inflexions and range of accent conveys brilliantly the ethos of precarious respectability and suffocating normality in which the anti-hero lives. This reading of the novel conveys the very feel of that lost lower-middle class, pre-World War I, world of minute social gradations, of stifling conformity and of emerging awareness of the potential for change through education and science. Hearing it some nine decades on one is very uncomfortably aware that this entire world is about to be scorched away and that the young shop-assistants and tradesmen who populate it have an appointment with destiny in the Pals' Battalions they will flock to when Armageddon looms. Wells' portrayal of the nuances of this world is sharply delineated, reflecting direct personal experience, and the frequent comedy never obscures the accuracy of the observation. Despite the humour - bordering on the farcical in Mr.Polly's confrontation with the dreaded Uncle Jim - there is a hollow centre to the story. Mr. Polly may escape one round of futility, but the liberation he discovers is scarcely more life or spirit-enhancing than that which he left behind. The book ends with Mr.Polly (it is notable that one still cannot drop the Mr., that defining badge of respectability) achieving a degree of animal contentment but still oppressed by a sense of the futility of existence. In this, as in his Science Fiction, Wells' vision is barren and hopeless. He was capable, as almost no other writer before or since, of visualising material progress with uncanny accuracy, but he missed any sense of the potential and grandeur of the human spirit. It is this that makes this story, though superficially enjoyable, finally so unsatisfactory.

The History of Mr. Polly Mentions in Our Blog