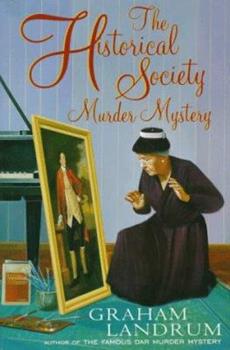 When a valuable heirloom portrait by Charles Willson Peale that is left to the local historical society turns out to be a fake, historical society president Helen Delaporte and octogenarian sleuth... This description may be from another edition of this product.

Published by Thriftbooks.com User , 20 years ago
The late Mr. Landrum has written an interesting puzzle regarding the theft of a valuable painting and the murder of a local "character". The chapters of the book are written by different members of the town of Borderville - Tennessee and Virginia. You will probably enjoy chapters by some of the authors more than others (I personally enjoyed the chapters by Henry Delaporte and Harriet Gardner Bushrow the best), but the charm of the book is the way it fleshes out the interesting community of Borderville. The mystery begins when Helen Delaporte, president of the local historical society discovers that the valuable painting left to the society is a fake, and a recent one at that. Having a million-dollar painting stolen from the society while she is president is too much for Harriet, so she goes to work trying to figure out how and who forged the painting. Shortly after the theft of the million-dollar painting is announced in the local newspaper, musician and friend to local artists, Randy Hartwell is found murdered in his home. Does the murder have anything to do with the theft, or is it merely a crime of passion as the local police believe? Harriet and her friends work to solve this interesting puzzle, giving us an amusing look at the town of Borderville and its residents. The mystery portion of the book is actually a small reason to read this story, much more involving is Borderville and its residents with their quirks, foibles and follies - just like any other small town. A perfect book to enjoy with a nice cup of tea.

Published by Thriftbooks.com User , 25 years ago
Graham Landrum Slips on a Peale, Otherwise Known as the Historical Society Murder Mystery/// Carolyn Schafer/// I feel compelled to warn you that when Mrs. Helen Delaporte asked me to write up this book report (the Old Orchard Fort chapter of the NSDAR is serious about getting its inches of publicity), I balked. I had so many things to do--a thunderstorm had blown branches all over the yard, the cat needed to be taken to the vet, well, you get the picture. And that is precisely the point. Helen, her husband Henry, and their friends had solved, rather cleverly I think, the disappearance of a Charles Willson Peale portrait (bequeathed by Mrs. Alberta Chamberlain to the Ambrose County Historical Society--Helen was elected president, of course), and that nice Mr. Landrum agreed to help them, once again, write it up. God rest his soul. Helen told me to forget about everything for just one afternoon and sit down with this manuscript and a toddy and enjoy, and I did just that. Now some people might think ladies of our generation don't know how to live, but I assure you we do. And so do our men. In fact, I'm writing this report while my husband is lunching with the new regional governor at Rotary Club. Now, I don't want to expose any surprises or red herrings, but I do believe readers will enjoy the rolicking romps of Mr. Landrum's arthritic sleuths and artistic suspects, roaming about Borderville, Tennessee and Virginia. And you might learn a thing or two about art, music, and manners along the way. There's plenty of poetry, ballet, and mayhem during this puzzling predicament to spice the story up just like a country stew. I'll admit I was rather shocked by the waterbed, skinnydipping, nude photography, and gum chewing, but dear Harriet Gardner Bushrow insists those parts, no pun intended, were necessary to help her discover who purloined the Peale portrait and replaced it with a fallible forgery. And Harriet was rather clever in baiting her traps; her grasp of local genealogy served her well as she figured out how to procure DNA samples (and I'm sure no one will turn her in for mail fraud). Well, I've got to go. Helen and Harriet are knocking at my door. We have a busy afternoon planned. First, we have a music recital to attend, and then we must go by the florist to pick up patriotic petals to place on DAR markers at the cemetery (I do hope we don't find any corpses like last time . . . ) I just wish that sweet Mr. Landrum could ride along with us just one more time for a new adventure. He has such a way of understanding us ladies. Now you treat yourself right and take an afternoon to enjoy this book and a nice toddy. It really is something nice.
Copyright © 2022 Thriftbooks.com Terms of Use | Privacy Policy | Do Not Sell My Personal Information | Accessibility Statement
ThriftBooks® and the ThriftBooks® logo are registered trademarks of Thrift Books Global, LLC