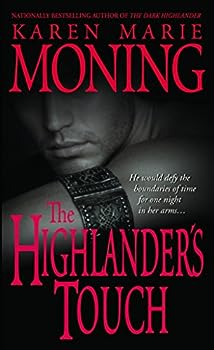 (Book #3 in the Highlander Series)

He would defy the boundaries of time for one night in her arms . . . He was a mighty Scottish warrior who lived in a world bound by ancient laws and timeless magic. But no immortal powers could... This description may be from another edition of this product.

A "Touch" of Karen Marie Moning

Published by Thriftbooks.com User , 21 years ago
Ms Moning once again hands us a tale of love that transcends time. Our fiesty heroine--Lisa, finds herself with the weight of the world on her shoulders, when suddenly she's thrown back in time to land literally at the naked feet of the powerful, immortal Circenn Brodie. The differences between the modern woman and the medieval man cause moments of tension and misunderstanding...as well as several scorching scenes between the two. With Circenn, being immortal, and swearing not to go through the pain of losing love again, Lisa finds her way into his heart. The "gift" Circenn gives to Lisa is immeasurable-- his love; but, at what cost to all? You MUST read this book to find out!From page one, we are swept into the characters lives, and become part of them until the very end. With stong emotions and extrordinary wit and humor, Karen Moning brings her characters to vivid life upon the page. One of Karen Monings finest works to date...I anxiously await her next book!!

Published by Thriftbooks.com User , 22 years ago
This is the story of an immortal Scottish warrior who is entrusted with the care of a flask by the Tuatha de Danaan (the Fairies). Circenn Brodie puts a curse on it when it ends up out of his hands. The curse will bring whomever touches the flask directly to him. Adam Black, "the blackest elf" coerces an oath from him that he will kill the bearer of the flask. Lisa Stone is a hard working young woman, working two jobs for 5 years to support herself and her mother, who is dying of cancer. Lisa's night job is cleaning a museum and this is where she stumbles upon Circenn's cursed flask. Unsuspecting of the power behind, she touches the flask, captivated by its beauty. Suddenly, the earth shakes beneath her and she feels like she is falling......Six years after cursing the flask , Circenn is taking a bath when in pops Lisa - flask in hand. He is sworn to kill whomever appears bearing the flask, but the oath given to Adam conflicts with one given to his mother, never to harm a woman. Lisa and Circenn are drawn to each other and he eventually decides she is innocent of any knowledge behind the powerful flask. In an attempt to protect her identity he introduces her to his knights and the Templar's in his group as Robert the Bruce's cousin. When the Bruce himself shows up he goes along with Circenn's lie the furthers it by announcing a betrothal between the two.Circenn has lived over 500 years and has seen many mortals that he cared for die which has left him bitter and unwilling to risk his heart. Centuries ago, to protect his heart from further losses, he set for himself a number of rules which he was very strict in upholding. He ends up breaking all these rules because of his love for Lisa. She is torn between wanting to stay with Circenn in 1314 and going to her dying mother's side in present day Cincinnati. All works out eventually and the book is a joy to read. Lisa has had a hard time having to suppress her dreams while working hard to care for an ailing parent, she is certainly a heroine that can be related to. Circenn Brodie truly embodies all you think a knight and hero should be. They are a wonderful compliment to each other.

Adam Black is back with a new agenda!

Published by Thriftbooks.com User , 22 years ago
Ms. Moning has created another beautiful fairy tale in her Highlander series. Circenn, an immortal Scottish warrior, has placed a binding spell on a flask he is entrusted to keep safe for the Tuatha de Danaan. When the flask winds up lost, Circenn swears to Adam Black he will kill the man who returns with flask. The whereabouts of the flask must be kept a secret. Lisa, a 21st century woman, lets curiosity get the better of her while working as a cleaning lady in a museum. The flask has finally turned up 700 years later and Lisa wants a closer look. Circenn is torn between oaths when Lisa shows up in the 14th century with the flask. He has also sworn to his mother to never to kill a woman. Now Circenn is hard pressed to keep Lisa's arrival from Adam. Little does he know Adam already knows. Lisa's mother, who is crippled and dying from cancer, is Lisa's main concern and she must get back to her time to take care of her.She wants to go home and can't believe Circenn can't send her back. As the love between Circenn and Lisa grows, so does a special bond of unspoken words between them. Circenn is afraid to tell her he's immortal. He's also afraid of loving someone and watching them age and die. Karen Marie Moning has me believing in Fairy Tales again.

Ms. Moning has the magic touch

Published by Thriftbooks.com User , 22 years ago
In 1308 Scotland, immortal Circenn Brodie guards several sacred icons including a flask containing the elixir of life. He places a curse on the flask that if anyone touches the flask they will automatically come to Circenn. Elf Adam Black insures that Circenn understands that the bearer of the flask must die even if he or she is an innocent person. In 2001, Lisa Stone feels her world cannot get any worse. While cleaning at a museum at night, Lisa touches a several centuries old flask. Something strange happens to Lisa and when she next opens her eyes, she is in the fourteenth century, under Circenn's suspicion. As they become acquainted with one another, they fall in love, but she feels a need to return home to care for her dying mother, leaving a permanent relationship in jeopardy. THE HIGHLANDER'S TOUCH is an entertaining combination of elves interfering with a time travel romance between a modern woman and a medieval immortal Highlander. Between Adam, other mythical interference, and the health of Lisa's mom, Karen Marie Moning freshens up the typical time travel romance. Lisa is a brave soul with the weight of the world on her shoulders. Circenn is more melancholy, especially about immortality and deceased loved ones, which leads to his struggle with a new love. This tale is worth reading by sub-genre fans, but also note that the author is also donating some of the receipts towards cervical cancer, an important element in the tale. Harriet Klausner

Published by Thriftbooks.com User , 22 years ago
Five years ago a fatal car crash killed her father and crippled her mother, Catherine, forcing Lisa Stone to work two jobs in order to pay cumulative medical bills and support herself and her mother. Adding to their burden, Lisa and her mother have recently been told that Catherine suffers from cervical cancer. Lisa's primary concern is caring for her mother, both emotionally and financially, but she is fast becoming disillusioned and exhausted. Her evening job, cleaning at a local museum, is Lisa's escape from the trials of the real world. While in her boss's office, fatigue overtakes Lisa and she falls asleep only to awaken when he and a colleague arrive early in the morning. Fearing termination, Lisa scrambles to hide under his desk and overhears the two talking about a rare, medieval artifact the museum has recently acquired. After they leave, curiosity gets the better of her and Lisa investigates the intricately designed box left on top of the desk. Upon opening it and touching the strange flask inside, the world shifts beneath Lisa's feet and she feels herself falling...landing at the feet of a giant man stepping from his bath.Circenn Brodie, laird of Castle Brodie, quickly realizes that the woman, Lisa Stone, who inexplicably materializes at his feet from thin air, is not of his time. Circenn surmises that a long ago curse he cast on a fairy flask has sent this woman to him -- and to her destruction. Circenn is a man of honor, but how can he keep his long ago oath to destroy the bearer of the flask when Lisa appears to be innocent of its power? The longer Circenn delays fulfilling his oath, the more of a temptation Lisa becomes.Emotions and sexual tension abound between Lisa and Circenn. Both are tormented by circumstances beyond their control. Lisa can only think of returning to her time and her dying mother; Circenn is torn between his attraction to Lisa and the fact that he is honor bound to destroy her. Lisa is spellbound by the mysterious, Scottish warrior and the living history around her, eventually resigning herself to the fact that she may never be able to go home. Ms. Moning pens a brilliant tapestry of fourteenth century Scotland, bringing to vivid life the tumult of the times, without being overwhelming. Ms. Moning is at the height of her craft bringing all of the elements in this story together smoothly and poetically, while creating very real people faced with seemingly insurmountable obstacles. Karen Marie Moning is a treasure in the Paranormal/Time Travel Romance genre. She entices and delights readers with her third book, THE HIGHLANDER'S TOUCH, introducing new characters, while bringing back the mischievous "black elf", Adam Black, from BEYOND THE HIGHLAND MIST, Ms. Moning's first novel.I highly recommend THE HIGHLANDER'S TOUCH as Ms. Moning's best work to date, and a story that readers won't soon forget.
Trustpilot
Copyright © 2022 Thriftbooks.com Terms of Use | Privacy Policy | Do Not Sell My Personal Information | Cookie Preferences | Accessibility Statement
ThriftBooks® and the ThriftBooks® logo are registered trademarks of Thrift Books Global, LLC