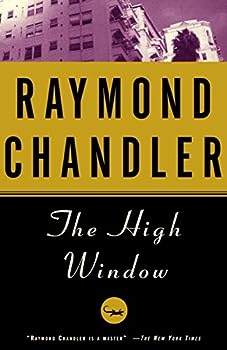 (Book #3 in the Philip Marlowe Series)

This description may be from another edition of this product. A wealthy Pasadena widow with a mean streak, a missing daughter-in-law with a past, and a gold coin worth a small fortune the elements don't quite add up until Marlowe discovers evidence of murder,...

Published by Thriftbooks.com User , 18 years ago
In Chandler's third novel, Philip Marlowe is hitting his stride. He's getting his life under control, he's right on top of the bad guys, and his honorable intentions save the day.In this outing, Chandler is hired by a rich woman to track down a missing coin. The woman assumes that a misbehaving family member has run off with it, but of course the story ends up far more complex than that and Marlowe wends his way through gritty LA streets in search of the truth.Marlowe's penchant for doing the right thing is even more in evidence here, as he works to help out characters that many times don't realize they need help. He does it not for fame or fortune, but because it's the right thing to do.Chandler's writing style shines with its usual brilliance, and he crafts his characters with an easy hand. He has brought Marlowe along from his initial hard-drinking despair into a detective who - buoyed with past successes - is now more comfortable with himself and taking better care of himself. The wit crackles, and the novel is as enjoyable and entertaining as anything Chandler has written.

Published by Thriftbooks.com User , 20 years ago
I decided to give this Raymond Chandler novel a shot after a vexing round of midterm examinations. If I didn't read something light and entertaining, my head would have exploded! I'd never read noir before, but I found this book to be pretty representative of what one pictures when one thinks of noir: seedy characters and snappy dialogue in a big, dark city teeming with danger. Chandler apparently gave new life to this genre when he wrote a few (an unfortunate few) crime novels starring Phillip Marlowe, a private detective who has since become immortalized in film and T.V. Chandler didn't even start writing these books until he was in his late 50's. Thank goodness he did write them, because this book is a real hoot!The High Window finds Marlowe on the trail of a missing coin called the Brasher doubloon. Within a few pages we begin to see an endless parade of seedy and suspicious characters, such as Mrs. Murdock, a port-drinking hothead who hires Marlowe to find the coin. Other characters include a scummy nightclub owner, a couple of dirty dames, and a cast of supporting characters both wicked and wise. At the center of it all is Marlowe, doggedly pursuing the truth through all the deceits and danger. I really can't go into the story because doing so would probably ruin the suspense for anyone who hasn't read the book. Just be prepared to see some wacky characters and great scenes.This book wouldn't be worth mentioning at all if it weren't for the dialogue. The language in this book is so clever and snappy that it literally makes the story. You'll howl out loud at some of the smart quips Marlowe tosses off as he tries to track down the doubloon. Another interesting aspect of the book is that everything occurs in the present tense. There is almost no history to know or anything in the future to worry about. This makes the story scream along at a fast pace; so fast that you won't want to put the book down. I never really thought I'd care for crime noir, but this book makes me want to read more! Recommended.

Published by Thriftbooks.com User , 21 years ago
Raymond Chandler has written some excellent crime/mystery novels, and this is no exception. The High Window was Chandler's third novel with Philip Marlowe. But don't worry if you haven't read the first two (The Big Sleep & Farewell, My Lovely) because The High Window could easily have been the first book. This novel works for several reasons. First, it is very easy to read. This is a 'page-turner' in every sense of the term. Secondly, the story is interesting and always has your attention. Chandler unveils the story in a way that makes you want to keep reading. Finally, the characters are almost always well done. Of course, Philip Marlowe is a great character, an old tough guy with some great dialogue. Although the book was published in the early 1940's, it does not feel like it at all. To those unaquainted with Chandler, the closest thing I could compare it to would be the 1974 movie CHINATOWN, written by Robert Towne. That's the style of it. It's different from Sherlock Holmes and Hercule Poirot. Give it a shot. Chances are it will grab you and you'll read it quickly.

Published by Thriftbooks.com User , 23 years ago
The High Window by Raymond Chandler The "HighWindow" begins one hot day in Pasadena, when "everythingthat grew was perfectly still in the breathless air they get overthere on what they call a nice cool day." If we don't know we arein a Philip Marlowe novel yet, we do as soon as we meet his newclient--a wealthy, obese widow named Mrs. Murdock. From theovergrown, dimly-lit sun room where she holds court, she gives Marlowehis latest p.i. assignment. He's to find a rare coin, the BrasherDoubloon, that was stolen from her possession. He's also to find herdaughter-in-law, a former nightclub singer named Linda Conquest, whodisappeared at the same time as the coin. "A charming girl--andtough as an oak board," Mrs. Murdock tells him, through sips ofher port. Marlowe's search for the pair leads to a tale more denseand tangled than the thick foliage of his client's sun porch. Hequickly finds himself enmeshed with a rich gambler and hisphilandering, showgirl wife; a thug with a frozen eye; and a morticianwho delves into politics. Marlowe also has to contend with the policeand a man in a sand-colored coupé who keeps tailing him. Then thereare the corpses that keep piling up in his path. There's also hisclient, who has her own share of tightly-bound secrets. Anear-invalid who spends her days lying on a reed chaise lounge,Mrs. Murdock still holds an iron grip on her effeminate son and thefragile woman who works as her secretary. The plot is fast-pacedand engrossing, but the real power of the novel lies in the snappydialogue and beautifully conveyed atmosphere. Chandler's style hasbeen copied endlessly by other writers over the past fifty years, butno one can touch him. Marlowe's is a world filled with hard-eyedFilipinos answering doors, nightclubs named the Tigertail Bar, andwomen who are "all cigarettes and arched eyebrows and go-to-hellexpressions." Even his butterflies take off heavily and staggeraway "through the motionless hot scented air." As withthe other Marlowe novels, there's the usual gratuitous wisecracksexchanged with minor characters--the sourpuss maid; the streetwisechauffeur; the old, watery-eyed elevator operator who breathed hard,"as if he was carrying the elevator on his back." Despite hiscynical words, Marlowe holds a special place in his heart for thelosers in the world. He sends cash to a pitiful handwriting expertand takes an inept detective under his wing. "The shop-soiledGalahad," an associate calls him. For the rest of thecharacters, however, he has nothing but contempt. A tough man in atough world, Marlowe doesn't hide his true feelings under a bushel.He describes the gambler's wife: "From thirty feet away shelooked like a lot of class. From ten feet away she looked likesomething made up to be seen from thirty feet away." Hisinstructions to the portly Mrs. Murdock: "Tell her to jump in thelake...Tell her to jump in two lakes, if one won't hold her." Chandler's master stroke as a writer is hyperbole. Even his sile

Another gem from the number one in noir.

Published by Thriftbooks.com User , 23 years ago
After jumping into the mystery-genre spotlight at the age of 51 with his classic first novel THE BIG SLEEP, Raymond Chandler went on to write six other novels which received considerably less acclaim than they deserved. THE HIGH WINDOW, published in 1942, sees Philip Marlowe, perhaps the most hard-boiled of all classic hard-boiled detectives, searching for a stolen rare coin and once again involved in the sordid affairs of the Los Angeles underworld, dealing with wealthy widows, tall blondes, showgirls, cops, and hitmen, and handling each in turn with the panache that only Marlowe could. Exquisitely plotted and written, THE HIGH WINDOW, like the rest of the Chandler library, is noir and the hard-boiled detective novel at its finest.
Copyright © 2020 Thriftbooks.com Terms of Use | Privacy Policy | Do Not Sell My Personal Information | Accessibility Statement
ThriftBooks® and the ThriftBooks® logo are registered trademarks of Thrift Books Global, LLC