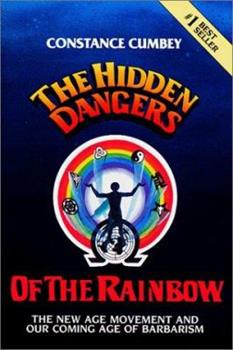 The Hidden Dangers of the Rainbow: The New Age Movement and Our Coming Age of Barbarism

This description may be from another edition of this product. Reflects years of in-depth and extensive research. The author claims the movement's supreme purpose: is to subvert our Judeo-Christian foundation and create a one-world order through a complex network...

Published by Thriftbooks.com User , 12 years ago
Constance Cumbey has written a well researched book. She has spend many years of her life following the New Age Movement and its involvement in ALL aspects of our country and world. I was especially interested in the entire chapter on Pat Robertson and the 700 Club. She has documentation that cannot be argued with. I believe that he has been deceiving many Christians and using the donations to Operation Blessing to fund his expenses for the Diamond Mines he owns in Africa. Robertson isn't what he appears to be. Robertson is a advocate for the Kingdom Now Dominion Doctrine. I did other research on the internet and it fully backed up what Constance Cumbey has written about and more. Beware before you make a donation to this ministry which reportedly takes in over $283 million per year. There are other credible ministries who could really use some of your donations. Constance Cumbey is a credible person and her ministry is much needed today. Even though this book was written in the 1980's it is still relevant for today. A must read by all Christians!! The New Age Movement is right on target to infiltrate the Church and bring American under a One World Order. I purchased her two books after listening to her being recently interviewed on the Christian radio talk show, "Frances and Friends", SonLife Radio, Baton Rouge, Lousiana. Anyone, anywhere can listen to this radio station on the internet at WWW.JSM.org.

Published by Thriftbooks.com User , 12 years ago
This book (and her others) is amazing and a must-read! I couldn't even begin to tell you everything that is going on under our noses and if you open up your eyes and pay attention, there is evidence for everything she writes in these pages (and the pages of her other works and her blog). Everything is right in line with Biblical prophecies! Things are happening just as she said they would with this movement and their "Plan." I think every Christian and everyone who may be innocently involved in this movement needs to read this book and her other works (and check out her blog for up-to-date happenings). But be warned... as the saying goes, "Ignorance is Bliss."--but it is also very dangerous.

Truth has a long shelf life

Published by Thriftbooks.com User , 18 years ago
Constance Cumbey's book, Hidden Dangers of the Rainbow, has been translated into several foreign languages and remained in print until Huntington House recently declared bankrupty. It has been in print for over 20 years. Those who work behind the scenes at changing the culture keep a very low profile. Particularly valuable is that in the book Cumbey names organizations that one would not encounter reading the papers. For instance, she goes into much detail regarding Lucis Trust, an organization based on the occult writings of Alice Bailey. This organization has been around since the '20s and is an offshoot of the Theosophical Society, also an occultic organization. Lucis Trust and the Theosophical Society were key players in the Parliament of World Religions in the early '90s. Another organization outed in the book is New Group of World Servers. NGWS is a branch of Lucis Trust. ngws.org is still very active and powerful. Lucis Trust still holds hands with the United Nation, again documented in her book. That the New Age religion has spread its cloak over many other countries is documented in many places. The academic community has taken a growing interest in this movement. New Age Religion and Globalization is based on a conference that was held in Denmark in 1999. The book is copyrighted 2001. I would also recommend Prof. Gene Veith's book, Modern Fascism. Twenty plus years ago Cumbey brought information on New Age to the general public, people who may not have access to the writings in the academic community. She cannot be thanked enough for providing this valuable service.Those who hope to find information about cults when purchasing this book need to look to other sources. As Hanagraaff points out in New Age Religion and Globalization, New Age religion is not cultic, but is based in cultural change.

Published by Thriftbooks.com User , 21 years ago
Constance Cumbey has done an excellent job trying to open Christians' eyes to the evil situation that is escalating about them. She portrays well documented evidence of the workings of Satan as God opened her eyes to his schemes. Her shock is genuine and sincere. She isn't an end of time alarmist and she doesn't even proclaim herself to be an author. She is merely a shocked Christian, trying to reveal a hideous situation that God has made clear to her. I have read this book a number of times over the years. The first time I read it was perhaps in 1988. It has been over ten years and I have continued to watch this movement she identified as satanic ten years ago. Everything she said about them 10 years ago has proven to be true and this group of people isn't as secretive in 1999 as they were in 1988. It's much easier to keep an eye on them now than before, but I wouldn't have ever been alerted had God not stirred her up to write those two books. Thank you Constance Cumbey.

Do yourself a HUGE favor - read this book!

Published by Thriftbooks.com User , 22 years ago
I was personally very entangled in the New Age movement for several years, so I can tell you that Ms. Cumbey's book is right on the money! She is NOT a nut case: the conspiracy outlined in her book is very real. This is "must" reading!
Copyright © 2020 Thriftbooks.com Terms of Use | Privacy Policy | Do Not Sell My Personal Information | Accessibility Statement
ThriftBooks® and the ThriftBooks® logo are registered trademarks of Thrift Books Global, LLC