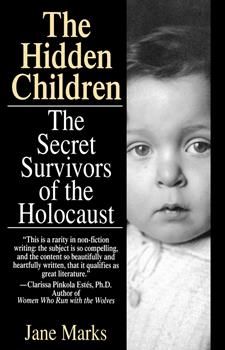 They hid wherever they could for as long as it took the Allies to win the war -- Jewish children, frightened, alone, often separated from their families. For months, even years, they faced the constant danger of discovery, fabricating new identities at a young age, sacrificing their childhoods to save their lives. These secret survivors have suppressed these painful memories for decades. Now, in The Hidden Children, twenty-three adult survivors share...

The story of those who survived

Published by Thriftbooks.com User , 15 years ago
In Nazi-occupied Europe the pre-war Jewish child population came to about 1.6 million. During the war an estimated 1.5 million Jewish children where killed , leaving only 6 to 7 percent of them alive at the end of the war. Through 60 interviews with former child survivors, the author puts togehter a fascinating book that traces the story of a few of the Jewish children who survived the Holocaust , hiding in attics , convents , sewers and forests. In some cases they where helped by having fair hair and looking less 'obviously Jewish'. It provides a compassionate and inspiring account , always reminding us of the humanity and childhood of the hidden children. It also deals with the lives of hidden children , after the war , as it traces their adult lives , and the effects of having to hide their identity , living in fear , and often , seeing their loved ones murdered. They where often faced with the imminent threat of discovery and saved by a series of miracles. These accounts are important to preserve in an age where genocide continues in places like Darfur in the Sudan , and has taken place in Cambodia , Rwanda and Kurdistan. Today influential voices are calling for an end to the State of Israel (which was in many cases built by holocaust survivors), which would certainly lead to a second holocaust aginst the Jews living there. It is up to us to prevent a second holocaust from occuring, by fully supporting Israel in her struggle to survive and fighting anti-Israel prejudice.

Published by Thriftbooks.com User , 16 years ago
This is an unforgettable book about the fate of many Jewish children who survived during World War II all over Europe. From a very young age they had to learn to hide the truth about their origin. Many among the very youngest could not hide with their families because the risk was too big (they could be noisy, cry or tell the truth). Many were placed in foster care, and the toddlers would grow up believing that their foster parents were their real parents. After the war many children in this category were traumatized when they were given back to their real parents. One of the really interesting aspects of this book is that it follows the hidden children from pre-war era until the 1990s. In this way we are told also about the problems and benefits they 'harvested' after those hidden years. I also found it very interesting to read the two last chapters: one puts the Hidden Child's experience into a historical perspective and one telling us about the psychology behind being a Hidden child. These two chapters are written by Nechama Tec, Ph.D. and Eva Fogelman, Ph.D. This is an easy and very interesting book to read. It is well written and highly recommendable.

A brief encounter with a few hidden children.

Published by Thriftbooks.com User , 23 years ago
On Memorial Day weekend,1991, 1600 people from around the world gathered together. They flooded the rooms of the Marriot Marquis Hotel in New York City, not only with their bodies but with their stories as well. For over fifty years they remained hidden, first from Hitler and then from the public. They kept their feelings and experiences to themselves because they were afraid. They were afraid of the pain and suffering it might bring to them or their loved ones if they revealed themselves. "For years and years I never wanted to talk or think about my experience during the war," states Ann Shore, a hidden Jewish child during World War II "Just thinking about it brought such pain!" Finally, the once frightened, hidden Jewish children of the war (now old men and women) overcame their fears and discussed their experiences during the Holocaust. Many realized for the first time that there were others like themselves, and there were people who cared about what had happened to them. One women, Jane Marks, cared a great deal and devoted her time to writing The Hidden Children: The Secret Survivors of the Holocaust a book filled with twenty-two inspiring stories. During the conference that weekend and during the months that followed, Jane Marks interviewed more than 60 former hidden children. She became committed to writing a book to record these children's experiences. "I wanted to write a book to make the world aware of the exceptional courage and goodness that emerged in the midst of unspeakable tragedy and destruction." She surely let the world know. By using twenty-two of the stories and continuously interviewing the same children over and over again, she was able to capture the ordeal, the legacy, the aftermath and the healing that these children went through. She used all the information available to establish a unique, truthful and emotional retelling of the Holocaust. In the first part of the book, the ordeal is revealed to the reader: tear jerking stories of how they survived for months in sewers, barns, cellars, closets, fields, anywhere they could, to escape being captured by the Nazis. Some lost their families and friends, but they all lost their childhood. It was the price to pay in exchange for their lives. Rosa Sirota said the following about being a hidden child: "None of the people who went through what I went through had the luxury of being children." Eight stories of courage fill this section of the book, and each one has its own miracle of survival. Sanne Spetter and Marie-Claire Rakowski tell their stories of the aftermath of the war. Both women were born during the war and because their parents feared their safety, they were placed with families. For the first years of their lives, they felt safe and secure and did not know their true identity. After the war, they were returned to families that had suffered more than they could ever imagine. The time after the war was

Published by Thriftbooks.com User , 23 years ago
I have read a lot of Holocaust books. What was new for me in this one was to see how difficult it was for a young child who had been sheltered under reasonably normal conditions to be reunited with his/her parents who had been profoundly affected by their experiences in camps or in hiding.

Sad but a great book!

Published by Thriftbooks.com User , 23 years ago
The Hidden Children is a great book. At school we were learning about the Holocaust and we needed to read a book about it. I went and saw this book and decided to try it. Later on, I found out that this book was great. This was a very detailed book. I cant believe that some of these families had to live in a closet for months or even a sewer...if you want a book on the Holocaust or just a good one to read...get this one!!
Trustpilot
Copyright © 2022 Thriftbooks.com Terms of Use | Privacy Policy | Do Not Sell My Personal Information | Accessibility Statement
ThriftBooks® and the ThriftBooks® logo are registered trademarks of Thrift Books Global, LLC