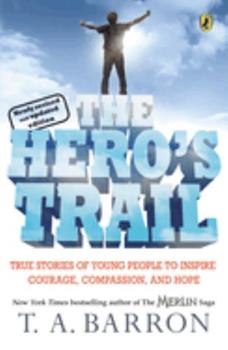 What is a hero? Using the metaphor of a hiking trail, bestselling author T. A. Barron discusses the great variety of heroes and brings them to life through their own stories: Some are well known, like Wilma Rudolph, Anne Frank, and Stephen Hawking. Yet most are "ordinary kids" who have made amazing choices: saved their siblings from a fire, struggled to stop prejudice at their school, helped raise money to build a well in an African village. This...

Showed me I can be a hero too

Published by Thriftbooks.com User , 13 years ago
Reviewed by Matthew Feliciano (age 7) for Reader Views (12/07) Mr. Barron's book, "The Hero's Trail," showed me, a kid, how it is possible I can be a hero, too. He wrote stories and short biographies in this book about all sorts of heroes. His heroes come from fiction and from history, and many of them became a hero with just one act (like Pocahontas). The chapter titled "Hero on the Spot" stood out the most to me. This told about people's heroic qualities and how it is possible to be a hero with one act. I never thought about one small act making someone a hero but now I did. Many of the acts of the heroes in this chapter were made by an urge and the person didn't think before acting. To me, sometimes that makes someone more of a hero when they trust what they believe or feel instead of taking time to think when there really isn't time. In "Hero to Others Near and Far," the author talks about how helping others can make you a hero. People like Allen Jay who helped the slaves and Grace Sanders who helped tornado victims were both kids who saw something wrong and did what they could to help. They made big choices and helped many people but small choices could make you a hero, too. Just think of the new kid coming into your class who doesn't know anyone yet. If you are nice to that kid and help him make friends, this would make you a hero to him and help him, too. The only thing I didn't like about this book was all of the talk about hiking. It made me distracted and confused sometimes. I didn't always know if this was a book about hiking or about heroes. But once I got past the hiking talk I liked "The Hero's Trail: A Guide for a Heroic Life" a lot!

Published by Thriftbooks.com User , 17 years ago
"Heroism, then, is about character." Fantasy writer T.A. Barron takes a brief but inspiring look at heroism in "The Hero's Trail: A Guide For a Heroic Life." Don't expect a parade of government leaders and superstars-who-rose-up-from-their-backwater-farm stories. Instead he presents smaller, more intimate stories about real-life people from all cultures and walks of life. Barron starts off by explaining what he means by heroism and comparing the ideal to hiking. He brings up people who are well known (Pocahontas, the Biblical Esther), legendary figures (Sheherezade, Prometheus), artists like MS sufferer and poet Mattie Stepanek, scientists like Stephen Hawking, and world leaders such as Abraham Lincoln. And then there are the less obvious ones -- the heroes that are relatively little known. There's Sokhoeun Chhunn, a girl whose response to racist insults was to organize cultural events; Samuel Long, who won at everything he tried despite his deafness; and then-six-year-old Michael Munds, who organized a charity competition for the families of the Oklahoma City Bombing. One of the most touching is Sadako Sasaki, a girl ultimately killed by radiation from WW II, who made cranes for world peace.Perhaps most likable about "The Hero's Guide" is that Barron really doesn't allow barriers in what he considers "heroism." He devotes page after page to people from different cultures, countries, and many of them are kids, like a young boy who started counselling others to keep them out of gangs. Sometimes their heroism is based on generosity, courage, or their strength of convictions. But it's remarkably insightful.Barron clearly admires the many heroes he profiles here, but he doesn't gush about them. Instead he presents the facts, what made the person special, and allows the readers to draw their own conclusions. Interspersing the real-life stories are Barron's own anecdotes, and a few final thoughts on what makes a hero.T.A. Barron proves that he's more than a fiction author in "Hero's Trail: A Guide For a Heroic Life." Genuinely impressive and inspirational.

Published by Thriftbooks.com User , 18 years ago
When you think of a hero, someone like King Arthur, Han Solo, or Clint Eastwood comes to mind. Yet, it is more often than not someone who you might not notice who is truly a hero. In this book, the author concisely illustrates from legend and reality the true nature of a hero, defining the qualities of perserverance, kindness, and courage, etc. that set a hero apart from the crowd. While many of the people he uses will be familiar, such as Esther, Princess Leia, Anne Frank, for example, some of the real life heroes are people that have been ignored. He presents role models for not only children, but for all people to strive and emulate in their lives. You never know when you might be called upon to be one, for as one of his examples, Princess Leia said, "They were in the wrong place at the wrong time. Naturally, they became heroes."

Published by Thriftbooks.com User , 18 years ago
The Hero?s Trail, by T.A. Barron, is a book about a series of people who, through strength, morality, and perseverance, manage to become heroes. Primarily dealing with ordinary people who turn into heroes when the time is right, it involves such people as Tiare Marie Wells, who saved the life of a ice fisherman who would?ve otherwise drowned and Ben MacDonald, who survived in the wild for over two months by living with a female badger. It also deals with people who overcame massive obstacles to do what they loved, such as Stephen Hawking, who overcame ALS to become one of the most renowned scientists in the world. It also details fictional characters such as Peter of Holland, who plugged a dyke with his finger and saved his entire village and Frodo, who risked everything to save his land from Sauron by destroying The One Ring. If The Hero?s Trail has a weakness, it is that it is too short. Barely a hundred pages long, it could easily be finished in a couple of hours. I would?ve loved to read more about heroes and for it to have involved some of my personal favorites such as Michael Jordan, who was rejected by his basketball team as a weakling. However, this shouldn?t prevent you from enjoying this wonderful book.
Copyright © 2020 Thriftbooks.com Terms of Use | Privacy Policy | Do Not Sell My Personal Information | Accessibility Statement
ThriftBooks® and the ThriftBooks® logo are registered trademarks of Thrift Books Global, LLC