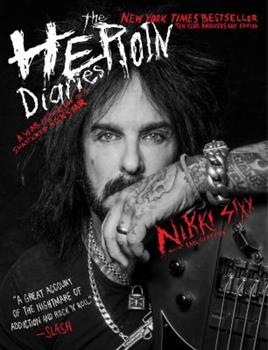 The Heroin Diaries: Ten Year Anniversary Edition: A Year in the Life of a Shattered Rock Star

by Nikki Sixx and Nicki Sixx

In honor of the ten-year anniversary of The Heroin Diaries , Nikki Sixx's definitive and bestselling memoir on drug addiction is reissued with exclusive new content. This shocking, gripping, and at times darkly hilarious memoir explores Nikki's yearlong war with a vicious heroin addiction. Now more than ever, with opioid addiction ravaging our country and rising by twenty percent in the past year alone, Nikki's story of both his descent into drug-addled...

Published by Jennifer , 3 months ago
Awesome read, so difficult to put down and when I finished it I was stunned with what this beautiful, extremely talented man has gone through and it is truly a miracle that he's alive today and is so willing to share it with his fans and trying to help those out there who are struggling with drug addiction. Will definitely read this again!!

Published by Michelle , 1 year ago
I’ve never read an autobiography before and I’ve been amazed by Nikki Sixx’s life. For him to be still around after all this craziness is beyond a miracle. Reading this book it really touched my heart in more ways than one. This book is truly a masterpiece.

Published by Mamabear , 2 years ago
Kinda scary, the mind of a drug addict. Not to mention he’s also a rock star so there’s some crazy things he’s done and gone through. Great book overall!

Published by Thriftbooks.com User , 3 years ago
I never receive the book it's been 4 month! Seller is a money stealer. Never got any refund!! Cheater!!

Published by Thriftbooks.com User , 4 years ago
A creative mind sober, a demented creative mind while strung out on heroin, Nikki Sixx gives a detailed and frightening account of his darkest year. I'm a long time fan of Nikki Sixx and Motley Crue and this book caught me off guard at times.

Published by Thriftbooks.com User , 13 years ago
Nikki Sixx has treated his fans and the memoir-consuming public to a real, live diary of a dope fiend. The Heroin Diaries recounts a dark year in the life of the Motley Crue bandleader/bassist. During 1987, the Crue was on top of the world with the Girls, Girls, Girls album release and world tour, but Nikki was hopelessly addicted to heroin (and coke, and pills, and casual sex), and living a caricature of the rock star lifestyle. (In perhaps the lowest moment of the book, he steals the girlfriend of a member of his management team. Well, he doesn't "steal" her. He meets her, wows her with his rock star style, bends her over some equipment backstage, and moves on. Without any regard for the relationship he just destroyed.) I had some hesitations about an art-style book written in diary form, with a smattering of lyrics and ink-blot-style illustrations. I'm a huge fan of The Dirt, and at a quick glance, this appeared to be more of a vanity project. Well, don't judge a book by its cover! The Heroin Diaries does contain Nikki's insane drug-addled ramblings, but it is augmented by quotes from band members, ex-girlfriends, photographers, band management, family, and friends. These are interspersed with the rather terse diary entries to provide perspective and context for Nikki's writings. All the players are brutally honest about Nikki's (and their own) failings during the hedonistic days of Motley Crue. (I now forgive the delay of the release of this book--I'm glad the authors and editors spent the time getting these quotes on the record.) The reader is treated to an inside look at what it is like to have all the money in the world and not observe any of the limits of traditional society. Nikki and his band shared a love/hate relationship with the drug. Nikki knew it inspired paranoia and ill health, but he craved the escape. His bandmates disliked Nikki's strung-out flakiness, but they also needed the break from Nikki's intensity, and recording sessions were more pleasant when heroin took some of the edge off. Nikki's drug dealer made a lot of money off the rock star, so he was always willing to make special deliveries or go out of his way to get back his customer when Nikki did a stint in rehab. The Heroin Diaries is a priceless piece of rock history (Nikki loved the as-yet-undiscovered Guns N' Roses and loathed the goody-two-shoes Whitesnake with their reliably decent performances). During this time, Nikki bought out all his band's master tapes from his former record company, which was a musicians-rights coup that has hardly been rivaled in the ensuring two decades. With a gag order on the specifics, he is only able to skirt around the issue, but this is just one of many accomplishments Nikki achieved while addicted to dope. Who knows what he could have done off the stuff? The book's architecture allows Nikki to step fully into the role of dope fiend, without preachy commentary and wisdom of hindsight, while his friends, f

Insight into the life of a shattered rockstar...

Published by Thriftbooks.com User , 14 years ago
In 1987 Motley Crue recorded Girls, Girls, Girls, toured with the then unknown Guns 'n Roses, sold out shows around the country (and world) and partied like they always had a day left to live. The previous book to tell the tale of this excess, The Dirt, felt more like a glorification of the excesses of the band, even though it addressed all the drug abuse Nikki Sixx subjected himself to, subsequent overdoses that almost killed him and reemergence towards a cleaner lifestyle. Basically, you take those chapters of The Dirt and make them their own book and you have The Heroin Diaries. The book is set up like a diary. In fact, it is a diary: the book accounts the year (Christmas 1986 to Christmas 1987) that Nikki spiraled down a deep hole of addiction and depression and kept insanely careful track of it in a notebook. In addition to his entries (cleaned up a bit so we can understand them), Nikki includes commentary from himself as well as those who were close to him at the time (it's clear that a lot of care and work was undertaken to get all of these voices lined up to tell this story). I'm reminded of one entry where Nikki says in passing that he had a blast at a radio interview the other night, but probably got the DJ fired. The commentary afterwards is the DJ's account of the debauchery that went down that night (and, yes, he did indeed get fired). Nikki doesn't pull any punches and asked all of his contributors to do the same. They are brutally honest and help paint a magnificent picture of what it is like to find yourself on a speeding train charging forward into a brick wall. If you ever wanted to know what the rock and roll lifestyle was like, or what it feels like to be addicted to drugs, this is the memoir for you. It's actually amazing to me that there could possibly have been any lucid entries. We assume of course that a number of them were cleaned up by the editor, but there are times when you are stunned at Sixx's foresight into the future of the industry (the eventual downfall of the hair metal genre by the flood of copycat bands), the future of the band (that they'd make their next record a #1 album) and even his own dim foreboding of the consequences of his lifestyle. He talks to the diary as if it were a person, as if it were his wife and only confidant in the world during that year (and it probably was). He addresses it with things like, "I have to go to the show now, but I'll see you when I get back tonight." When he departs without an entry for several days (sometimes simply because he is sober and sane) he is always apologetic and makes jokes about how he only writes to it when he is on drugs. The book pages are broken up with scribblings, notes that presumably came out of the original dairy (To Do lists, lost lyric ideas, notes and the like), drug abuse inspired art and photographs of the people and places addressed, as well as song lyrics from a whole career of Sixx's songwriting. There are Motley Crue

Published by Thriftbooks.com User , 14 years ago
I have been a Crue fan since I was a kid. I always thought Nikki was just about the cat's meow in all ways. This book was a really great read into his life in a HORRIBLE time that should have been great. His addiction really speaks out in this book, and it really pained me to read about someone so totally hooked on drugs. The only problem I had ( other than THANK GOD he came to grips over it) was his fixation on his childhood. It WAS a sad story, about his father abandoning him, and a mother so immature and selfish at times, that she let other people raise him, but what bugged me so bad was that it bugged HIM so bad. He really, basically, blamed his addiction on his childhood, and I think that was pretty sad. I had a Johnny Cash song childhood, and YES I made a few bonehead decisions when I was younger and blamed them on my Dad dying, his alcoholism, etc, but I just honestly NEVER let it push me into doing SMACK!I guess some people just deal with things differently than others. I really did like the story, I think he did himself a justice writing it, and I was really pleased with the ending, a SOMEWHAT happy one, but one that held a lot of hope, and hope is what keeps a person going. There was absolutley NOTHING glamorous in this book, and that is a GOOD THING, makes you really THINK about what hell an addiction can be. OH...and I STILL think Nikki is the cat's meow!!!!

Published by Thriftbooks.com User , 14 years ago
I could not put this book down. I read it in one sitting. Not only is it a great read, the format of passages interspersed with lost lyrics, photos, and artwork is fantastic, and made it much more of a multi-dimensional experience than merely reading words. The words themselves tell a story that is tragic, heart-wrenching, shocking, gritty and at times sickening in their truth. This is a story of the un-glamorous disease of addiction in the glamorous world of entertainment and rock and roll. The honesty is brutal, and it left me changed. I have nothing but admiration for Nikki in his willingness to share this unflattering aspect of his life in the effort to save if only one soul. Many thanks for this gift.
Copyright © 2020 Thriftbooks.com Terms of Use | Privacy Policy | Do Not Sell My Personal Information | Accessibility Statement
ThriftBooks® and the ThriftBooks® logo are registered trademarks of Thrift Books Global, LLC