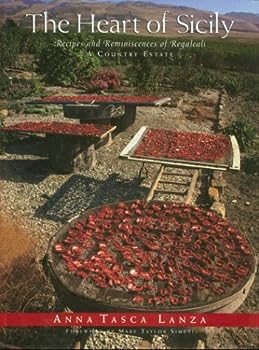 In a warm, witty text and more than 125 photographs, a Sicilian aristocrat shares her world with us, describing the land and depicting country life in an exquisite book destined to become a classic.... This description may be from another edition of this product.

Published by Thriftbooks.com User , 18 years ago
By Bill Marsano. 1993 was a landmark year for cookbooks: That was the year Contessa Anna Tasca Lanza published "The Heart of Sicily." Long out of print, it is now restored to us at last. Cause for rejoicing! The Contessa seldom uses her title; in fact, she prefers to be known for her cooking and her cooking school. And so she is--internationally. The importance of her title is only this: It ties her to Regaleali, the great estate that has been at the heart of Sicily for centuries--since the time, in fact, of the Arab conquest, when the place was known as Rahal-Ali or Village of Ali. Sicilian cooking isn't "Italian cooking"--it's one of the 20 or so related cuisines to be found in Italy, and it is at the same time the most and least original. Most because it is so little akin to any of the others; least because it's really a composite, developed from so many other source cuisines: Greek, Roman, Arab, Norman, French, Spanish. Still, it's not exactly a mystery because so many of the 19th-Century immigrants to America were Sicilians, and their food was, for many of us, the first "Italian food" we tasted. The book naturally follows a seasonal menu--Regaleali, though mostly a winery, remains enough of a farm to grow most of its own food. Also, since the sea in Sicily is never far away, there is much to be made of anchovies and swordfish and tuna. Finally, since we are in Sicily, the sweets and pastries are breath-taking. The Contessa is a non-nonsense cook, I was relieved to find. For all her fame and stature she is perfectly content with boullion cubes, noting only that pepper and especially salt must be added with great care at the end of cooking to avoid over-seasoning. Likewise she's not one of those who claim that olive oil cannot be kept for more than a year--keep it cool and in the dark, she says, and it will keep far longer. You will find here recipes familiar and recipes startlingly new to you, and there is overall a conversational approach: You feel as if you and she are cooking on the same side of the stove. Most important you will find that the Contessa's beauty and dignity infuse her prose style as well. To take but one example: "The winter sunshine in Sicily is one of the most beautiful things you can experience. I remember one magical day, one of those days I call a gift from God. The sky was blue, blue, blue, and the countryside green everywhere. From where I stood, I could see the Madonie Mountains, covered with snow, and Etna, also snowcapped, in the distance. All around me was silence, except for a few birds here and there talking to one another." The recipes are clearly laid out and easy enough to follow. You will want to take care to purchase Regaleali wines, which bear the label of the Counts Tasca d-Almerita, to serve with them (look them up at www.winebow.com). The many, many photographs are spectacular.--Bill Marsano is a James Beard award-winning writer on wine, food and travel.

A Way of Life: Food & Family on a Grand Estate

Published by Thriftbooks.com User , 20 years ago
Anna Tasca immerses you in the daily life of her noble, progressive, very close knit family whose life revolves around enjoying food, wine and each other's company and love. You feel like you're by their sides through all the seasons in the kitchen and on the land on their Regaleali estate. As you drool over the recipes of each season, from simple to exotic to complicated, from traditional to more modern, you feel Anna is chatting away with you. On things like how she and a team made tomato extract from 4000 pounds of tomatoes over 10 days, how her family expanded their wine business (her mum went from restaurant to restaurant selling 130,000 bottles one year), how important citrus is in Sicilian cooking (some wonderful recipes like Citrus Risotto!), how their shepherds make cheese, how they all celebrate the end of the harvest and new wine (same menu every year, her parents start the dancing). I'm an average cook so I stick to the easier recipes and dream of going to Sicily again to taste the others! A delightful book!....

Published by Thriftbooks.com User , 22 years ago
Anna Lanza heartfelt look at Italian culture and cruisine was splendid because of her personal view of Sicily. The photos contained in the book were so beautiful (and there were so many)! I have made several of the recipes and they were easy to follow and turned out exceptional.
Trustpilot
Copyright © 2022 Thriftbooks.com Terms of Use | Privacy Policy | Do Not Sell My Personal Information | Accessibility Statement
ThriftBooks® and the ThriftBooks® logo are registered trademarks of Thrift Books Global, LLC