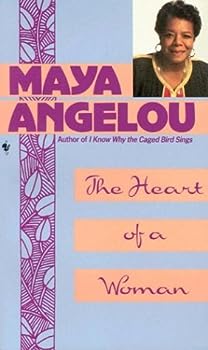 The Heart of a Woman

In The Heart of a Woman , Maya Angelou leaves California with her son, Guy, to move to New York. There she enters the society and world of black artists and writers, reads her work at the Harlem... This description may be from another edition of this product.

An incredibly fascinating continuation of her life

Published by Thriftbooks.com User , 20 years ago
I just finished "Heart Of A Woman". I had read "I Know Why the Caged Bird Sings" last year. Several weeks ago I decided to read the rest of her books. Thus, I've read "Gather Together In My Name", and "Singin' and Swingin' and Gettin' Merry Like Christmas" in succesion. This book is one of the best that I've ever read, and I read alot of books! Her life is so interesting and eventful. Even though she relates her trajedies as well as her joys, you don't feel sorry for her, because through everything she remains true to herself and thereby comes out on top. Her tender devotion to her son is very touching. Through a childhood of constant changes he is depicted as a wonderful human being, equally devoted to his mother. There are parts of the book where I was laughing out loud at situations she gotten her self into and how she handled them. What a woman! I've just ordered "Travelin' Shoes", which I think is the last in the series of autobiographical books. I will continue to read her poems and whatever works she has produced. She is a woman to be respected and admired.

Published by Thriftbooks.com User , 21 years ago
"The Heart of a Woman" is a continuation of Maya Angelou's multi-volume autobiography. Written a direct and uncomplicated style, this volume opens in 1957, with Maya as a young mother raising her son in California.As the narrative unfolds, Maya moves to New York City, where she becomes involved in the Harlem Writers Guild. The author goes on to describe her experiences in the theater, her involvement in the civil rights movement, and her work as a journalist in Africa."The Heart of a Woman" is a fascinating evocation of a turbulent era in both American and African history. I was particularly intrigued by the story of Angelou's performance in Jean Genet's play "The Blacks"; Angelou offers some interesting insights into the relationship between artistic and racial issues. For those interested in women's studies, African-American literature, literary autobiography, or mid-20th century American history, this book is an essential text.

Published by Thriftbooks.com User , 23 years ago
"The Heart of a Woman" tells of a courageous woman, Maya Angelou, who maintains a career as a dancer while raising a rebellious teenage son. She also identifies with the struggle and hardships of dealing with relationships. Her encounters with famous people such as Billie Holiday, Malcom X, and Dr. Martin Luther King, reflects strength in her writing and her passion for life. This book will inspire everyone to be successful in their everyday living. This great book will also bring out "The Heart of a Woman" in everyone.

Published by Thriftbooks.com User , 24 years ago
When I first picked up this book, I thought to myself 'Ah yes another "Go Women" book. I started to read it. The extensive aray of emotions and thoughts this book provoked was amazing. I never thought a book could touch me so deeply. Sometimes, I laughed so hard I needed to put the book down, sometimes cried a river, sometimes threw the book across the room in disgust and anger for all the racial comments of both black and white races. One amazingly breathtaking story. I recently went to see Maya Angelou speak, the topic " Composing oneslef". The moment she was introduced and came on stage, I burst into tears. It was the most wonderful thing I have seen to date. I highly, highly recommend this book to all who want an amazing story and want to come away from a book with self-confidance, reasurance and re-newed self worth: I am Woman.

One of the best books I've ever read!

Published by Thriftbooks.com User , 24 years ago
This book was so wonderful that I ran out and bought all of Maya Angelou's novels. And the heart of a woman is still my favorite one. I am a young white female who hasn't experienced near what the author has, but she made me feel like I had. I could totally relate and it was hard to put the book down.
Trustpilot
Copyright © 2022 Thriftbooks.com Terms of Use | Privacy Policy | Do Not Sell or Share My Personal Information | Accessibility Statement
ThriftBooks® and the ThriftBooks® logo are registered trademarks of Thrift Books Global, LLC