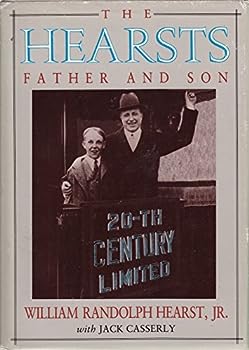 The Hearsts: Father and Son

The Hearst name has been at the forefront of American life for over a century.As founder of a media empire, William Randolph Hearst, Sr., changed the face of American journalism. He was larger than... This description may be from another edition of this product.

This Is Vital History

Published by Thriftbooks.com User , 14 years ago
Wow! For once, somebody tells us other stuff about William Randolph Hearst besides the fact that he slept with Marion Davies. And I was getting pretty tired of hearing that he started the Spanish American War until this book filled the void in Mr. Hearst's career between the end of that war in 1898 and his death in 1951. That's 53 years of American history he helped shape! Amazing that he kept a close watch on all his newspapers until he died at home in Beverly Hills at age ... 83, was it? Never had Alzheimers. Granted, he was wrong to scare the American public in the Roaring Twenties with lies about "negroes" who smoked a lot of "marihuana" and then raped white women. But he was a dear friend to baseball fans because he was the first to use fast shutter speeds and publish huge blow-ups of Shoeless Joe Jackson and other great players in the act of sliding to home plate. Mr. Hearst was also a dear friend to people who worked in or enjoyed all branches of show business -- Hollywood movies, nightclubs all around the country and Broadway plays. Hearst published many photos of entertainers and publicized them without invading their privacy. He would spin in his grave if he could hear what Howard Stern says about entertainers today. Old Man Hearst did not write an autobiography, but it was very nice of his son to do this book. The son died less than two years after it was published. Lest you think aging Hearst writers spent the 1980s gossiping, you should see (in this book) the photo of the Pulitzer Prize - winning Joseph Kingsbury Smith with French prime minister Francois Mitterand taken in 1986. Mr. Kingsbury Smith was one of the great foreign policy experts who worked for the Hearst Corporation for many years. He visited Moscow and got a long interview with Nikita Khruschev. He lived in Virginia and worked out of Hearst's Washington, DC office as late as 1996. It is sad that few books tell you about Mr. Kingsbury Smith or show what he looked like. Hundreds of American history web sites omit his name but tell you about Marion Davies, presumably because she was ... smarter? And if you think only a right-wing newspaper magnate like Hearst Sr. could misbehave, then you might not be aware of the horrible behavior of 1940s New Yorker editor Harold Ross, hardly a right-winger. This is a must read for 20th Century American history buffs. Please check it out.

A better under standing of Son and Father

Published by Thriftbooks.com User , 14 years ago
The Hearst: Father And Son A much complete and better understanding of Son and Father. I think the son never mastered the difficult and different personalty of his father .It is apparent I believe Mr. Hearst's great and unlimited wealth, for the times made it possible for Mr Hearst to do and accomplish projects only he could grasps.
Trustpilot
Copyright © 2022 Thriftbooks.com Terms of Use | Privacy Policy | Do Not Sell or Share My Personal Information | Accessibility Statement
ThriftBooks® and the ThriftBooks® logo are registered trademarks of Thrift Books Global, LLC