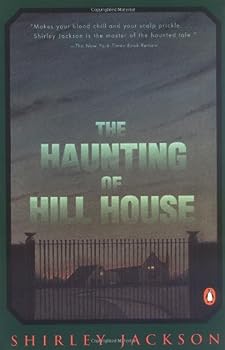 The Haunting of Hill House

This description may be from another edition of this product. The greatest haunted house story ever written, the inspiration for a 10-part Netflix series directed by Mike Flanagan and starring Michiel Huisman, Carla Gugino, and Timothy Hutton First published in...

Even the words on the pages are haunted

Published by Thriftbooks.com User , 19 years ago
The Haunting of Hill House remains one of the most important horror novels of all time and certainly one of the most singular haunted house tales ever written. It is certainly worth mentioning that at no time do we or the characters actually see any sort of visible ghostly manifestation; the phenomena are limited to cold spots, spectral banging on the walls and doors, messages written on walls, and torn, blood-spewed clothing in one room. If Jackson had compelled Hugh Crain (the main who built Hill House) to pop out of the woodwork and say Boo!, this story would have been long forgotten. Still, it quite amazes me that Shirley Jackson has met with such critical success and eternal popularity; I say this only because her writing style is unique and rather off-the-wall. Truly, Jackson's writing itself is haunted, and she herself almost surely was in some manner. There is a degree of insanity in every page; the characters often engage in dialogue that is childish of a sort and certainly different from normal adult conversation. I would think such idiosyncratic writing would appeal only to those like myself who are different, somewhat kooky, outsiders looking at the real world through thick-paned glass that sometimes fogs over or plays tricks with our eyes depending on the angle in which the sun hits it or does not hit it. Eleanor is an especially appealing character to me because I share many of her doubts and fears: I don't belong, what are people saying about me?, are people laughing at me behind my back?, why am I here and where am I going?, etc. No one rivals Jackson in the ability to paint a deeply moving, psychologically deep portrait of the tortured soul. The fact that so many people praise this book must mean that most people are plagued with self-doubt, which I find sadly comforting. In any event, Eleanor is a perfectly tragic heroine; those who can't relate to her must surely at least pity her. The character of Theodora is also fascinating, as she largely represents Eleanor's opposite: a vibrant personality, full of life and a need to be in the middle of it, probably insecure inwardly but strikingly bold outwardly. This dichotomy between two "sisters" is a constant theme in Jackson's work. The Eleanor-Theo relationship is reflected and honed against the relationship of Hugh Crain's two daughters, twin souls who grew up the dark mansion as loving sisters but who eventually came to hate each other and fight for ownership rights to the house. Eleanor and Theo also have a subtle love-hate relationship, the conflict between the two representing a jealousy over the house. Both want to be the center of attention, although Eleanor would never admit such a desire, and the fact that the house itself obviously harbors a strange enchantment for Eleanor bothers Theo and enchants Eleanor. When Theo's room and clothing are painted in blood, the house clearly signifies the soul with whom its sympathies lie, and this marks a turning point in

one of two books which have genuinely scared me

Published by Thriftbooks.com User , 21 years ago
I saw "The Haunting", the movie version of the book when I was in high school and I remember, quite vividly, how much it scared me. What's so ironic, taken in the context of today's effects and fireworks shows, is that back then, in the early '60s, this movie never shows a monster...or anything else that would OBVIOUSLY frighten. The breathing doors and sounds in the hall were more than ample to illustrate fear. The book is much richer in detail and includes, especially, two scenes which I feel really should have been included in the movie. The first is when Eleanor and Theo take a stroll around the grounds of the house with Luke and Theo and Luke pair off and Eleanor thinks they are right behind her. They are some distance away, yet she senses them (or something) close by. The second is after an altercation one night Eleanor stalks out of the house and Dr. Marquay sends Theo after her to bring her back. The two of them are so wrapped up in their respective inner turmoil they fail to notice how far they've walked from the house(and at Night!) They notice, suddenly, that the landscape has become like a negative photograph, with light and dark reversed...they continue on and come upon a happy scene, in bright color, of a family having a picnic. The description of this made my hair stand on end. The horror is implied and erupts only occasionally but always with tremendous effect. This is truly a modern classic of the genre...the opening lines as memorable as "Last night I dreamt I went to Manderley again" or "Call me Ishamel"..."Hill House, not sane, had stood for eighty years and might stand for eighty more...within, floors were firm, windows sensibly shut, and whatever walked there, walked alone." My suggestion...don't read this book alone, but read it!

Published by Thriftbooks.com User , 21 years ago
THE HAUNTING OF HILL HOUSE is one of the most subtle yet disturbing ghost stories ever written. Deservedly a true classic of the genre and a fine piece of modern American literature, the genius of Jackson's writing is in her SUBTLETY. Generally I find that readers who don't like or understand the book don't realize that all the while they're under Jackson's spell. (it's a book many people need to read over again) This short novel is one of the RARE FEW which will LINGER in the psyche LONG after it's been read! In the previous reviews, approximately 90% of the readers who were "disappointed" felt there was SOMETHING unique about the book. Eleanor. Eleanor was never "normal" to begin with; in Hill House she was like a kid in a candy store! Unable to relate to people, the house becomes her lover and her best friend; they become as ONE. I have to admit that I would have liked the book to have been longer, but I suspect Jackson's sudden ending was her style of "shock". Shirley Jackson knew what she was doing; this book is a classic witch's brew of symbolism and, boy, does it prey in the hallways of the mind! Forget what the previous scoffers say: read this alone in bed on a stormy night and I GUARANTEE you'll agree that Jackson was a master of her craft!

Published by Thriftbooks.com User , 21 years ago
Shirley Jackson is truly the master of horror. She weaves a dark tale of loneliness, depression, sadness, obsession and fear. Most readers, who have seen the remake, seem to be impressed with special effects and cheesy plots. This story is chilling not because of the supernatural themes, but because of the dark recesses of human nature. People don't seem to realize that the ending (without giving too much away) depicts Eleanor's response towards her feelings of isolation and depression. Who knows if she did what she did because of a ghost or because she was truly mad? was she trying to stay in the only place that understood her or was the house trying to keep her? Please, don't base this literary masterpiece on a REALLY bad movie. read the book and decide WHO was in control-Eleanor or Hill House?

The Haunting Of Hill House Mentions in Our Blog 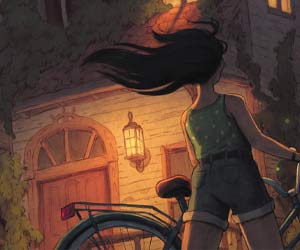