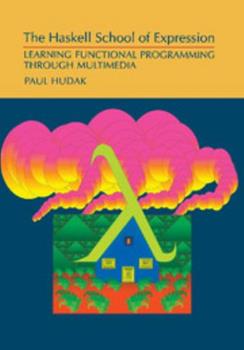 The Haskell School of Expression: Learning Functional Programming Through Multimedia

Published by Thriftbooks.com User , 16 years ago
in general, and if you don't know Haskell, OCaML, ML, or F#, then you really should buy this book and work through it. A generation ago, Abelson and Sussman wrote "Structure and Interpretation of Computer Programs," which brought world-shaping clarity to programming in the form of a generic, functional approach. In the time since then, "types" and "lazy evaluation" have fundamentally improved that overall approach, and Haskell is the rightful successor to Scheme as the best-of-breed of functional programming languages. That said, types and lazy evaluation are somewhat tricky to learn, and this book offers a fun and easy way to do it. The software needed to run the samples in the book is free and works on Windows platforms (and possibly some others). Buy it, work through every word of it, you won't regret it :)

Published by Thriftbooks.com User , 16 years ago
C, Java, Pascal, Ada, and so on, are all imperative languages. They are "imperative" in the sense that they consist of a sequence of commands, which are executed strictly one after the other. Haskell is a functional language. A functional program is a single expression, which is executed by evaluating the expression. Anyone who has used a spreadsheet has experience of functional programming. In a spreadsheet, one specifies the value of each cell in terms of the values of other cells. The focus is on what is to be computed, not how it should be computed. This book is a unique attempt to teach the reader the Haskell programming language by demonstrating how to write programs that perform interesting tasks such as animation, graphics, robot control, and functional music composition. The book succeeds at introducing the reader to the Haskell language and the idea of functional programming, and the book is a fascinating read with unique projects performed in the Haskell language. This is particularly true if you are interested in multimedia programming. However, intermediate features of the language are brushed over. If you are already familiar with Haskell, this book will teach you interesting ways to look at functional programming and give you some ideas for some interesting projects. If you are new to Haskell, you are going to find yourself somewhat confused when you get to the more advanced material. I therefore recommend that you read this book along with "Haskell:The Craft of Functional Programming" by Thompson. That book is not nearly as interesting as this book, but it fills in all of the intermediate details that are missing in a very detailed manner.

The Haskell School of Expression

Published by Thriftbooks.com User , 18 years ago
As an experienced programmer new to Haskell I found this book both enlightening and frustrating. The author does a superb job of teaching you how to think like a functional programmer, his stated goal, but occasionally leaps over too many steps for a beginner to follow his implementations. The book is however quite readable and works well in conjunction with the various on-line tutorials on Haskell syntax. I'd recommend the book for anyone looking to get into serious functional programming.

Brings out the "fun" in functional programming

Published by Thriftbooks.com User , 19 years ago
I already knew Haskell when I started reading this book, but it held my interest right through to the end. This is largely due to Hudak's choice of interesting application domains (graphics, animation, robotics, music) and how neatly applications in these domains can be expressed in Haskell. (As an advanced reader, I was particularly interested in the treatment of the design and implementation of his functional animation language.) More than just that, though, the book's success derives from a very nice blending of theory and practice. I especially liked his use of calculational reasoning as a approachable form of program proof. I highly recommend this book if you want to learn functional programming--tastefully--and have fun while doing it.

Published by Thriftbooks.com User , 22 years ago
This book takes a nice approach to teaching functional programming. Paul Hudak uses fun examples, with applications to multimedia. Early on you are using the graphics library to make shapes in windows, and by the end there is Haskore, a cool way to compose music. However, these examples are not JUST fun, they also serve as nice examples of how to think about and construct functional programs, in domains where functional programs really excel. If you ever thought about learning what this stuff was about, this book is the right choice!
Trustpilot
Copyright © 2022 Thriftbooks.com Terms of Use | Privacy Policy | Do Not Sell or Share My Personal Information | Accessibility Statement
ThriftBooks® and the ThriftBooks® logo are registered trademarks of Thrift Books Global, LLC