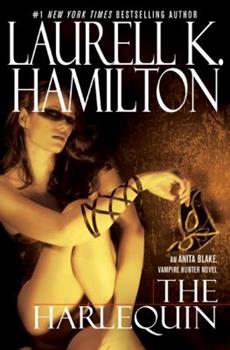 Into Anita Blake's world-a world already overflowing with power-come creatures so feared that centuries-old vampires refuse to mention their names.

Still sexy, with a little more this time.

Published by Thriftbooks.com User , 12 years ago
When this series began, I rated the violence content "R", and the sexual content "PG"; the violence has remained more or less constant throughout the series, but the sexual content has gradually increased until it got to the point, three or four books ago, that I would have to rate it "X"; if you enjoy a fast-moving, well-written pornographic novel, as I do, then you'll continue to enjoy this series; if that's not what you're looking for but want to read books like the early ones in this series -- hard-bitten detective novels with a fantasy background and a bit of light eroticism -- you'll want to stop somewhere around book eight in the series. That being said, this book is closer in tone to the older books than any book has been in a while, since "Obsidian Butterfly" at least; there are still some pretty graphic sexual scenes, but they don't dominate the book the way they have for the past few books. Still, I wouldn't start with this book, as it would be hard to keep track of what's happening and who the players are if one hadn't been following along from the beginning, nor would I advise skipping from the earlier, less sexually graphic novels to this one, for the same reason. But if you've been reading the series all along, and have been considering stopping as the last few books haven't satisfied you, I'd suggest reading this one before giving up on the series.

Published by Thriftbooks.com User , 13 years ago
The Harlequin shows another facet of Anita's powers and how dangerous it is to come up against their double triumvirate (misspelled?). If only Richard can get himself together. I'm interested to see where Ms. Hamilton / Anita is headed with all these powers. Why were necromancers killed off? Is Larry an unknown necromancer or just an animator? What is this unknown strain in her blood? Is it what defines her as a necromancer? Is it what allows her to collect "were" abilities without changing or with the ability to control her change? Is it the part that connects her to Richard and Nathaniel through the triumvirates? The underlying story is just so interesting. Anyways, this was a really good addition. Hopefully we get more answers instead of more questions. =)

One of the series' best

Published by Thriftbooks.com User , 13 years ago
The Harlequin starts off like Burnt Offerings, with a harbinger of vampiric doom; this time it isn't the Council itself coming to visit, but rather the long arm of vampire law: the Harlequin. These are the silent assassins of vampiredom -- the Justicars, for those who know White Wolf, and that was immediately how I thought of them -- who enforce the Council's law, observing and eliminating vampires who break the rules. I read another book not long ago that used Harlequins as a name for a group; in that book, the use of the name was, well, lame, but in this book, the use of "Harlequin" worked, mainly because the name itself was not supposed to project their uncompromising deadliness: it was more a reflection of the vampire love for melodrama, and for that, the references to Commedia dell'Arte worked. They use masks to communicate -- if you get a white mask they are observing, a red mask means they're going to hurt you, and a black mask means they're going to bake you brownies. No, not really. -- and they wear costumes and use the names of the original characters of the Commedia, Columbine and Pantaleon and so on. And since these vamps come from the founder of the council, the MOAD, it seems very likely that the ancient Italian characters came from these folk, not the other way around, and that's just cool. Anyway, the Harlequin come to town (and ruin Anita and Nathaniel's anniversary date night, which is too bad because the date has implications for their future relationship, and also too bad because the thread of Nathaniel and Anita's relationship gets lost in the events that follow, which probably has further implications for their relationship) and then immediately start screwing with Jean-Claude's power base, by going after the weak link in the St. Louis vampire world: Malcolm and all of the un-blood-oathed vampires of the Church. Anita is understandably freaked out by these things, and she calls in the big guns: Edward. Who brings not only Olaf, but also his newest back-up: Peter. So here's the thing with these books. The characters are so real, and so honestly multi-layered, that they do unpredictable things, and they do things that have serious repercussions, repercussions that may very well keep on echoing again and again. What's more, since the series is as long as it is, there have come to be many, many characters who are like this. Peter and Olaf are prime examples of that. When Edward brings these two, all Hamilton has to do is write down their names, have Anita see them just once; we immediately understand several things about this. We know that Olaf is going to cause real problems for Anita, since he wants to hunt and kill her, and we know that Peter's coming is not only dangerous for Peter, but also for Edward, and for Donna, Peter's mother, and we already have ideas and opinions on all of these things. We also wonder if this means that Edward has gone soft, since he had to have given in to sentiment in bringing his 1

I am guilty of being a fan.

Published by Thriftbooks.com User , 14 years ago
I enjoy all the Anita Blake books including this one. I buy them and will read them over and over again. This is one of my go to series when I need something to read and have nothing new. The author is not the best writer, but these action filled books have me addicted. If the writer could improve upon her skills, cheesiness, and repetitive use of the same descriptions. The dialog can drag on and become nagging making you wonder how you can like characters in a book that seem so ignorant and lacking in sense.

Published by Thriftbooks.com User , 15 years ago
FINALY, less sex more action and mystery solving, too much sex in last 3 books, glad anita is back in action (not in bed)
Trustpilot
Copyright © 2022 Thriftbooks.com Terms of Use | Privacy Policy | Do Not Sell or Share My Personal Information | Accessibility Statement
ThriftBooks® and the ThriftBooks® logo are registered trademarks of Thrift Books Global, LLC