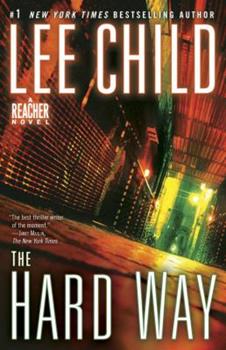 Jack Reacher was alone, the way he liked it, soaking up the hot, electric New York City night, watching a man cross the street to a parked Mercedes and drive it away. The car contained one million dollars in ransom money because Edward Lane, the man who paid it, would do anything to get his family back. Lane runs a highly illegal soldiers-for-hire operation. He will use any tool to find his beautiful wife and child. And Jack Reacher is the best manhunter...

Published by Thriftbooks.com User , 15 years ago
As I am a `Virgin' as far as Lee Child's books are concerned, I was quite surprised to read on the fly leaf that the author is not American, particularly as the content of the book is pure American thriller. This type of book is not really my cup of tea and would certainly not have been the first book I would have picked off the shelf, but I get books sent to me both from publisher's author's and also my family use every occasion to buy me books as presents and this is where this one came from. I have since learned that as far as thriller authors are concerned Lee Child is flavour of the month, so it was with some interest that I sat down to read the book. The book is well structured. It has a beginning a middle and an end (you would be surprised how many books don't). Well written by an author who has researched his subject thoroughly and in Jack Reacher the leading character in the book he has portrayed an endearing modern day hero, who grows on the reader as the book progresses. For anyone who loves thrillers particularly American based thrillers. This would be manna from heaven. For those who love the authors writing, I am preaching to the converted. For those who have not read his books, they are well worth reading. Try this one and perhaps then you will want to read his other books too.

Published by Thriftbooks.com User , 16 years ago
The critically acclaimed Lee Child has already firmly established his credentials as a maven in the creation of the action thriller. His latest offering, "The Hard Way" featuring his magnetic protagonist Jack Reacher, only further enhances his reputation. This gripping novel immediately captures your attention and leads you through a thoroughly engrossing plot. As is usual Reacher is minding his own business sipping an expresso at a sidewalk Greenwich Village cafe, when he inavertantly observes a man get into a car and drive away. What he had actually seen was the pick up of a ransom. The moralistic Reacher is a powerful, supremely confident and resourceful nomadic individual, figuratively a man's man. He would be a valuable ally but rue the person that would be considered his enemy. Uncharacteristically, Reacher the next day visited the same cafe where a waiter pointed him out to an inquisitive man. The man named Gregory was a former Special Forces soldier now employed by a wealthy ex-Delta Force colonel Edward Lane. Lane was the head of a small army of blacklisted former Special Forces operatives now employed as mercenaries. Being beckoned and chauffered to the Dakota apartments by Gregory, Reacher was informed that Lane's stunning wife Kate and her 8 year old daughter from a previous marriage, Jade, had been kidnapped. Lane who had procured a small fortune as a result of his participation in a civil war in the African country of Burkina Faso, could well afford the exorbitant ransom demands. Reacher also learned that Lane's first wife Anne had also been kidnapped but unfortunately killed during a bungled FBI investigation. Reacher soon made Lane aware of his finely honed investigative skills courtesy of a long stint as an Army M.P.. The merciless and psychotically regimented Lane offered Reacher a fee of one million dollars for the recovery of his wife and the identification of the kidnappers. Commencing his investigation, Reacher soon bumped into Patti Joseph the younger sister of Lane's first wife Anne. She had been observing the comings and goings of Lane and his six man A team of covert operatives for a long while, setting up surveillance from her nearby apartment. She introduced Reacher to Lauren Pauling, an attractive middle aged private investigator and former FBI agent. The guilt riddled Pauling was the agent in charge of Anne Lane's abduction. Together the women filled Reacher in on the details of Lane and his exploits. Reacher and Pauling would team up to investigate the latest kidnapping. The unearthing of some surprising clues, stoked up feelings of hatred for his boss, Lane. Reacher now had a cause to fight for, the well being of Kate Lane and her daughter Jade. The dogged Reacher would eventually solve the mystery, mete out his own righteous and draconian form of justice and then as always fade back into the woodwork. I eagerly await Childs' next Reacher adventure "Bad Luck and Trouble".

Published by Thriftbooks.com User , 16 years ago
I'm a big Lee Child fan. As far as I'm concerned, the tight-lipped, human arsenal Jack Reacher is the most compelling figure in contemporary escapist thriller fiction. So when I tell you that "The Hard Way" is the best novel of its kind to hit the shelves in the last few years, I'll admit I'm biased. This is the tenth in the Reacher series, and it may be the best. In "Hard Way", trouble finds Reacher innocently enough, sitting in a New York sidewalk caf? sipping an espresso. Events unwind, and soon our hero is locked-and-loaded in solving a kidnapping, thick as thieves with a team of mercenary thugs, contemporary soldiers of fortune with shady backgrounds led by former Special Forces colonel Edward Lane. Lee Child is at his best when spinning a good mystery for Reacher to solve, and nagging incongruities surrounding the kidnapping of Lane's wife and daughter provide the perfect backdrop for Child to practice his craft. "The Hard Way's" Reacher is a bit wiser, more mature, using more brain and less brawn. More Sherlock Holmes and less Rambo this time around. In fact, more than 300 pages have turned before Reacher actually hurts someone, but the Child layers the tension and drops hints masterfully, leading up to a climax that will have you sweating right through your Barcalounger. The author's patented lean and no-nonsense prose is in top form, but what makes Child so readable are the obscure little bits of knowledge and factoids tucked away in cracks and corners of the plot, adding enough depth and authenticity to give the larger-than-life Reacher credibility that sets him apart from the just plain silly superheroes of so many "thrillers" of the day. So to wrap it up, "The Hard Way" is about as good as it gets - intelligent, clever, a .50 caliber pressure tank tale that twists and turns and jumps from Greenwich Village to Africa's west coast - of bad guys doing bad things and paying the price to an avenging angel in the form Jack Reacher. One word of warning: don't start reading this unless you've got some free hours ahead, for once started, "The Hard Way" is likely to trash plans for the weekend or keep you up way past bedtime. But the again, I'm biased.

Published by Thriftbooks.com User , 16 years ago
I have a dirty little secret: Every time a new Lee Child book comes out, I secretly hope it will be lousy. Most series that have lasted for ten or more books have a few clunkers in them. When I read those clunkers, I think to myself, "A-ha! I knew they were only human!" and spend a good week or two feeling smug and superior. But so far, the only feeling the Reacher books have stirred in my cold heart is envy. THE HARD WAY is no exception. Once again, Child drops his loner hero into the middle of a very bad situation, and once again Reacher uses a combination of wits and violence to unravel an ever-twisting plot. THE HARD WAY contains more than its fair share of action, suspense, surprises, and sex. It also contains some damn fine writing. I couldn't turn the pages fast enough, and hated for it to end. If you're a reader, you'll love it. If you're a writer, it won't make you feel good about your own work. Not even a tiny bit.
Trustpilot
Copyright © 2022 Thriftbooks.com Terms of Use | Privacy Policy | Do Not Sell or Share My Personal Information | Accessibility Statement
ThriftBooks® and the ThriftBooks® logo are registered trademarks of Thrift Books Global, LLC