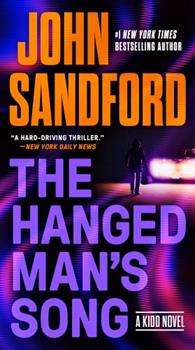 (Book #4 in the Kidd and LuEllen Series)

The best Kidd novel yet!

Published by Thriftbooks.com User , 17 years ago
While the "Prey" series featuring Lucas Davenport is more widely known, the Kidd series just seems to have even more intrigue than the well-written Prey novels. Kidd is just on the other side of the law, brash, and technologically-sound to the point that computers can get him anything he wants. Sure it's not legal, but you find yourself cheering him on...his actions are illegal, but he's still the protagonist!The plot centers around the murder of Bobby, a character all readers of the Kidd novels are familiar with. I won't go into the details of the plot so nothing gets spoiled, but I'll admit that when I first read the synopsis, I figured I wouldn't like the fact that Bobby was killed off.I was wrong.As the story comes together, things begin to make sense. But in the final few pages of the book, everything is revealed and you finally understand why it was necessary for Bobby to be killed off...and you begin to wonder what the next Kidd adventure will be because so many possibilities have been opened up!Best Kidd book yet...but the ones that are upcoming are sure to be right on par as well!

Published by Thriftbooks.com User , 17 years ago
Since there wasn't much one could do with the snow outside, I decided to finish up a novel I started yesterday. It is The Hanged Man's Song by John Sandford. I like Sandford's Prey series with Lucas Davenport, but I don't think I've read any of his Kidd novels. Kidd is a painter and a hacker who lives pretty much on the wrong side of the laws when it comes to computer crime. In this installment, an uber-hacker known as "Bobby" is murdered and his laptop is stolen. When incriminating stories about government officials and programs start hitting the news, it becomes obvious that the person who stole the laptop was able to break the encryption codes and unleash the attacks until he gets what he is after. Kidd needs to stop him in order to prevent his own life from coming to an end if there is damaging information about him contained in the files. The writing is tight and realistic, and if you're at all into computer crime novels you'll enjoy this one a lot.

Published by Thriftbooks.com User , 17 years ago
I am an avid John Sandford reader and Lucas Davenport fan but the Kidd series is my favorite. Since there have been relatively few books featuring Kidd, I was delighted to see the publicity for this book until I read on the book jacket that Bobby's murder and its ramifications form the central element of the plot. Bobby has been such an essential supporting character in the previous books that I was afraid that the author had chosen this method to end the series and thus my enjoyment of this story might be bittersweet. While it is always disappointing to say goodbye to an old literary acquaintance such as Bobby, Kidd fans should be relieved that the ending holds out the possibility that the series will continue. But beware, Kidd and Luellen will be forever changed.The story is very simple, superhacker Bobby, Kidd's online lifeline and friend, goes silent and when Kidd and a friend assemble the clues that reveal Bobby's physical location (they have known him only in cyberspace), they discover that he has been murdered. Ominously, Bobby's laptop has been stolen and Bobby's circle of friends are very worried about what secrets might be revealed (including clues to their identities) if the encryption is cracked. Therefore, they have the dual goal of avenging Bobby's death and protecting themselves as well. Soon, secrets from Bobby's laptop start becoming public that involve powerful people, strike at the heart of government, and increase the risks to all concerned; thus their quest becomes a race against time. This is the quintessential Kidd, a libertarian loner with his own agenda, operating on both sides of the law and torn between his artistic impulses and his computer skills. And, as usual, his sometime partner (in crime and romance) who he knows only by her alias of Luellen figures in the action as the puzzle gradually unravels.And we are left with Kidd to puzzle out the identity and the meaning of the Hanged Man who keeps appearing in the Tarot spreads which he does to attempt to stimulate his insights about the problems which they encounter. As Kidd and Luellen match wits with Jimmy James Carp, we see the ambiguities that develop when combating evil; at times they have to decide whether the ends justify some questionable means. This is a fast paced story that I found hard to put down, and I suspect that we may meet Rachel Willowby (the young hacker whose role is crucial to the story) if there are future sequels in this series. So the story raises many questions, from whether Bobby's death will be avenged to such existential musings as whether people are really dead if elements of their lives continue to exist. As Luellen muses about Bobby "he's like Janis Joplin... I heard ME AND BOBBY MCGEE on the radio... Janis is dead, but I never knew her personally, and I keep hearing her song so to me, it's the same as if she is still alive..." Can Bobby's computer keep him alive, or can Lemon (whoever he may be) successfully become his successor? An

Published by Thriftbooks.com User , 18 years ago
This is an excellent book if you like action/mystery fiction. My recommendation is buy it, read it and enjoy it. If you're new to John Sandford novels there are three previous books in this series featuring the computer hacker named Kidd and his friends. I'd say read the previous books in the series before you read this one. You'll get a lot of enjoyment and by then this one might be out in paperback or on sale. In my opinion ALL John Sandford/John Camp books are clever and well written. This is one of his best. The 'Kidd' series features stories that have a background of computers and technology. You don't need to be a technophile to enjoy them but if you are you'll like them just that much more. One point, since computer technology is changing so fast the tech points in the older Kidd books may seem dated, don't worry though, when the books were written the points were valid and the stories hang together nicely. In this latest book the author has his main character acknowledge the fast changing nature of technology and how some of the things they are doing will very soon be outdated. Once again though, this is a good story and will continue to be so even after the tech points in the book are outdated. I think the author had fun writing this book. I certainly enjoyed reading it. I find it absurd that the Kidd series is less highly regarded then the 'Davenport' series written by the same author. Both series are well-written engrossing tales and well worth reading. I'm sure if you like one series, you'll like the other series.

A Day With John Sandford is a Day Well Spent

Published by Thriftbooks.com User , 18 years ago
Whenever I see the name John Sandford on a book with a title that I have not already read, I buy it. I don't look at the jacket. I don't read the blurbs on the back of the book. I just tuck it under my arm, and I buy it. And, when I get home, no matter what else I am reading, I read it. He is that good, and more important, unlike some other generally very good authors writing today, he is that consistent. I tell you all of this in fair warning - I am a fan of John Sandford (I know he is really John Camp, but I first met him as John Sandford and it has stuck.). That being said this not his best book. His best books are any of his Lucas Davenport, "Prey," novels. The Kidd series is not his best series, it is merely the second best thriller series being written today. Sandford's "Prey" series is the best, the benchmark. However enough of all this, simply stated, this is his best Kidd novel to date and that makes it very good indeed. That I personally find Kidd a less interesting character than Davenport is not as important as this fact, he is still a very believable, very well drawn, character. The bad guy, less well drawn, but still believable, is not as important in this novel as the way the plot works out and the way that Kidd responds to the pressure that is a hallmark of all of the Sandford novels. This book requires no suspension of disbelief in one of its central points, that anyone talented enough and persistent enough could find evidence of a number of really bad things that many powerful politicians have done, and that if these items of evidence were all collected into one place, this information would be both powerful and dangerous for the holder. This drives the plot to Washington, DC, a place that I have called home for too many years and one that is often ill portrayed in fiction. Not in this book. While I do not guarantee you could follow Kidd and Company around DC on a map, I do guarantee that the novel's moves through the city are believable and perceptive. Sandford, as usual, has done his homework, he knows Washington. This is a very good book. This is an intelligent book. This book is well written, and most of all, I liked it. It repays the time spent reading it with enjoyment. There are few higher compliments in fiction.
Copyright © 2020 Thriftbooks.com Terms of Use | Privacy Policy | Do Not Sell My Personal Information | Accessibility Statement
ThriftBooks® and the ThriftBooks® logo are registered trademarks of Thrift Books Global, LLC