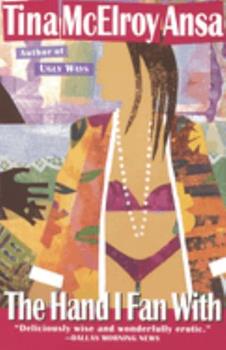 The Hand I Fan with

(Book #3 in the Mulberry, Georgia Series)

Bestselling author Tina McElroy Ansa is back with another tale from Mulberry, Georgia, the richly drawn fictional town and home of the extraordinary Lena McPherson. Lena, now forty-five and tired of being the hand everyone fans with, has grown weary of shouldering the town's problems and wants to find a little love and companionship for herself. So she and a friend perform a supernatural ritual to conjure up a man for Lena. She gets one all right:...

Published by Thriftbooks.com User , 20 years ago
Although I agree with some other reviewers that it took far too long to get to the story of Herman and Lena, this is still one of the best books I have ever read. I got the point early on that Lena was beautiful, wealthy, talented, business minded, etc. I didn't need 150 pages to explain it though. But once the story came to life with Herman the book moved rather quickly. Their spiritual and physical love for each other was so overpowering sometimes, I had to put the book down for a day to savor the chapter I had just read. Tina I usually can't stand to see the "f" word in a love scene, but your use of the word was very fitting and made the characters love-life jump off the page. I cried my way through the final chapters because like Lena I couldn't stand the thought of Herman not being with her. A powerful read indeed.

Published by Thriftbooks.com User , 21 years ago
The Hand I Fan With by Tina McElroy Ansa is a fascinating and entertaining novel. Lena McPherson, the protagonist of the story, is the hand that everyone in Mulberry, GA depends on physically, financially, emotionally and socially. Lena seems to have it all-the latest car, a thriving business, beautiful clothes, a fancy home, community status and so many people who depend on her call her "the hand I fan with". But Lena's life is strangely empty. Lena lacks the love, comfort, support and companionship of a man, and so Lena and a friend perform a magic ritual designed to "call her up a man". And a man Lena receives in the form of Herman(ie Her-Man) a ghost over 100 years old. Herman is the perfect man and helps Lena to understand/learn that she can give all she has to give and still have love left over for others. But do the townsfolk appreciate the new Lena or are they put off by the makeover and to what extent will they go to show Lena how they feel about the changes that she has made.Due to mixed reviews, this book sat on my bookshelf for two years before I finally decided to read it. Aside from some parts of the story which were overwritten/too overly descriptive(i.e. Lena's house, Lena's clothes, Lena's shoes..et al) I really enjoyed this story. While Lena was the subject of the story, Ansa was really speaking to all women. In The Hand I Fan With, Ansa teaches us that as women it is important to explore the issue of how one lives as well as how one loves. She wants the reader to see beyond the clothes Lena wears or the car Lena drives, and see how women, can live a full life on this planet. How we live a spiritual life in the midst of plenty or in the midst of deprivation. How we reach the balance of duty to others and self-fulfillment. How attachment to things and fixing and doing saps us of the joy of living. How it is possible to be a mother without giving birth or without formal adoption. For this is a woman's story of giving too much to others without thought for self. It is the story of how many women live our lives in a rush of accumulating and sacrificing. It's a story of self-realization and the journey to change. I must admit I'm sorry I listened to others as I missed out too long on an intriguing and delightful read. Once I started reading it I couldn't put it down. It was a story that I wanted to read in one sitting, but the story was so erotic and delectable that I decided to read it slowly and savor it for as long as I could because this was one story I really didn't want to end. Sometimes you can't believe what you hear or read you just have to pick up a book for yourself and see if you like it. The Hand I Fan With was that book for me. I'm glad I finally indulged myself as this book was worth the read and is one of my Top 10 reads for 2001.

I want the Vapors:-)

Published by Thriftbooks.com User , 22 years ago
Tina McElroy Ansa...mmh, mmh, mmh!! I don't even know where to begin. I guess I'll start by saying I've fantasized about many men, but none as gifted as Herman. If I ever get the pleasure of meeting Mrs. Ansa, I'd shake the H-E-double hockey stick out of her hand. Girlfriend, put her foot in this.This is the story of a woman named Lena whose blessed birth marked her to be the luckiest woman in Mulberry. She has the looks, the clothes, the cars, the house, the land, the business'S (I capitalized the 'S' for a reason) With all I ran down, one would think Miss Lena had all a woman could ask for. NOT!!!!!During a busy life of selfless living for socially inept and ill-informed town's people, she meets a man that only we women can dream about. I'm talking about a palpably spiritual brother. His name is Herman. Who's B-A-D? Certainly not Micheal in comparison to Herman. If you're a woman whose ever talked about a man who was so good he could make your 'little sister' sing, or ever laid next to a man wishing you could absorb him into your body through the pores of your skin, you need to take a walk with Lena through Mulberry, via Tina McElroy Ansa. Let me say this, the book is fantastic, so take your time reading it and follow along closely. You'll find out why the title of the book is what it is and why Herman's name is so befitting.This was the romance of the Decade for me. Thank you Mrs. Ansa.

Published by Thriftbooks.com User , 23 years ago
I thought this book was absolutely great! This author bought the character to full circle. They way in which she wrote this book it's almost like she experienced it herself. The character, Lena is a women that I would like to mirrof myself! She had class, culture and smarts. She is self-sufficient and what I call "All women"! She was not lucky in love no, but I believe she was put on earth to help others, which she did. It was unfortunate that her man had to be a spirit. When I think of it, he had to be a spirit as no man could compare to Lena. She had so much love and material items to give that a human probably couldn't have handled it. I've read many books by numerous black authors and this one is a keeper. It is a must read!!!!

Published by Thriftbooks.com User , 23 years ago
Tina McElroy Ansa has a gifted way of writing that makes you feel like you're in the town of Mulberry, living among her characters. You can see them, hear them, love them and suck your teeth at their bold ways. Her writing's engaging, funny, sexy and above all -- uplifting and inspiring. I felt wonderful after reading this book.
Trustpilot
Copyright © 2022 Thriftbooks.com Terms of Use | Privacy Policy | Do Not Sell or Share My Personal Information | Accessibility Statement
ThriftBooks® and the ThriftBooks® logo are registered trademarks of Thrift Books Global, LLC