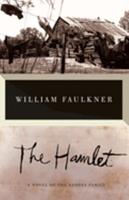 (Book #1 in the The Snopes Trilogy Series)

The Hamlet, the first novel of Faulkner's Snopes trilogy, is both an ironic take on classical tragedy and a mordant commentary on the grand pretensions of the antebellum South and the depths of its decay in the aftermath of war and Reconstruction. It tells of the advent and the rise of the Snopes family in Frenchman's Bend, a small town built on the ruins of a once-stately plantation. Flem Snopes -- wily, energetic, a man of shady origins -- quickly...

Published by Thriftbooks.com User , 15 years ago
Faulkner assembled much of THE HAMLET from short stories, where his themes were courtship, lust, love, and obsession or where the average person succumbs to greed or foolishness and is victimized in business. Take the subject of love. In THE HAMLET, Faulkner examines obsessive and unrequited love through his characters Labove (an achiever obsessed with untouchable beauty) and Ike Snopes (a retarded man in love with a cow); ambivalent love through the experience of Mink Snopes (a vicious murder) and Jack Houston (a guilty widower); and loveless marriage through the lives of Eula Varner and Mrs. Armstid, who are at the top and bottom of social hierarchy. Each of these characters is unique and fully realized. Yet each suffers from cruel variations of a single force. Not to be a pedant: But Robert Penn Warren described THE HAMLET as: "...a sequence of contrasting or paralleling stories" where Faulkner's "...movement was not linear but spiral, passing over the same point again and again, but at different altitudes." This is exactly right. At the same time, THE HAMLET is about Faulkner's writing. Here's one quick example, with this great author writing about the weather. "It was a gray day, of the color and texture of iron, one of those windless days of a plastic rigidity too dead to make or release snow even, in which even light did not alter but seemed to appear complete out of nothing at dawn and would expire into darkness without gradation." Great isn't it? Even so, I was surprised by one aspect of THE HAMLET. It is: terrible things happen to all the characters. This even includes Flem Snopes who is a winner in the male world of business but surely locked in a loveless marriage. Yet despite their cruel fates, Faulkner's amazing characters persevere. As he said when accepting his Nobel: "When the last ding-dong of doom has clanged, ...there will still be one more sound: ...a puny inexhaustible voice, still talking. I refuse to accept this...." READ THIS GREAT BOOK

Published by Thriftbooks.com User , 16 years ago
I'm not sure how exactly to say this without sounding closed-minded and elitist, so I'll apologize right off the bat for that. But I'm not sure the people who disparage this novel on this website quite "get it," and I think part of the reason might be that most of those people aren't from the South. This is an episodic, rambling, distinctly Southern story, told in an episodic, rambling, distinctly Southern way. That's just how things work down here, and I realize it's not that way in Hoboken (which is fine too). It's also a very rural setting, so that may turn some people off or lead to some misunderstanding. Having said that, this book is a major Faulkner work, meaning it's great, not merely good. It's his most explicit critique of capitalism and his most explicit commentary on love in all its forms, and it's a very funny one at that -- again, it's from a Southern angle, though; if you've lived in an industrial rather than rural society your whole life, it may not appeal to you as much. Like most Faulkner, you have to settle into the prose and the pace. The characters The Hamlet introduces are among Faulkner's most memorable: the rapacious Flem, the wonderful Ratliff, the oddly moving (trust me) Ike, etc. Faulkner has been accused of exploiting his poor whites in this novel, but I think his surprisingly sympathetic treatment of Mink in the trilogy counters this charge pretty well. I've read everything Faulkner's ever written at least once (two to four times, for his major works), and this is my favorite. If you think Anse is funny in As I Lay Dying, or Virgil and Fonzio in Sanctuary, you'd probably really enjoy this book. It's the only time you'll ever hear a teenage girl rebuff her schoolteacher's inappropriate sexual advance with the command, "Stop pawing me. You old headless horseman Ichabod Crane." Priceless.

Published by Thriftbooks.com User , 19 years ago
The Hamlet is about the beginning of the rise of the Snopes clan. But what you get out of it, what is more lasting than the stories of a pack of low-down people clawing and cheating and killing their way across Yoknapatawpha County -- which are devastating, and funny, and weird enough in themselves to earn this novel the highest praise -- is the sensation of immersion into William Faulkner's fictional reality. It is a universe in which the characters do things that people do, but as you are reading you get the feeling you might be dreaming. Something is just off, and that strangeness serves as a giant light beam on the human soul. No one has concocted a stage and players like this, with such deep insight, and beautiful poetic prose, and humor, since Shakespeare maybe. Read The Hamlet slowly, read sentences twice sometimes, don't hurry, and you will be utterly, irreversibly hooked.

Published by Thriftbooks.com User , 24 years ago
An excellent intro to Faulkner. Beautifully written and one of his most accessible works. See the "Long Hot Summer" with Paul Newman and Joanne Woodward which is a filmisation of a novella of the same name in 'The Hamlet'. Great stuff!

Published by Thriftbooks.com User , 25 years ago
Although I have been a Faulkner fan practically since birth, I put off reading the Snopes trilogy for years because, I suppose, it seemed inconceivable that Faulkner could write more than a small number of books as gripping and involved as "The Sound and the Fury" or "Light in August" or "Absalom, Absalom"; in other words, I delayed reading the back volumes of his oeuvre, as it were, in order to stave off disappointment, to delay the moment at which I would have to admit that Faulkner, even Faulkner, could not be great all of the time. After all, who could expect such Biblical grandeur and keen insight from yet another book covering the same Mississippi turf? But Faulkner is nothing if not surprising: his prose here is just as innovative and finely-tuned as in his better-known work, and the chapters -- many of them published separately as short stories, such as the famed "Spotted Horses" -- are individual gems which, when added up and interconnected, form a satisfyingly complex and interdependent whole. Faulkner is the very greatest, the writer who almost single-handedly raised American literature to the level of myth; who saw most clearly the meaning of roots and background in the shaping of human lives; who understood most incisively how such stories could grip and lash the imagination, and the consciousness, of a receptive reader. I plan to read the next installments of this trilogy post-haste, without regard to potential disappointment: I trust him now to take the story to new heights.
Trustpilot
Copyright © 2022 Thriftbooks.com Terms of Use | Privacy Policy | Do Not Sell My Personal Information | Accessibility Statement
ThriftBooks® and the ThriftBooks® logo are registered trademarks of Thrift Books Global, LLC