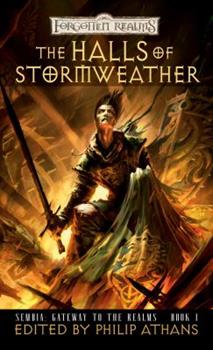 (Part of the Forgotten Realms Series, Sembia, Gateway to the Realms (#1) Series, and The Chronicles of Erevis Cale Series)

Seven authors--Ed Greenwood, Clayton Emery, Lisa Smedman, Dave Gross, Voronica Whitney-Robinson, Richard Lee Byers, and Paul Kemp--contribute sections to this seven-part novel that offers close-up... This description may be from another edition of this product.

Good Except For One

Published by Thriftbooks.com User , 12 years ago
This is the first book of the Sembia: Gateway to the Realms series. There are 8 short stories written by Ed Greenwood, Richard Lee Byers, Clayton Emery, Dave Gross, Paul S. Kemp, Lisa Smedman, and Voronica Whitney-Robinson. Each story involves a particular member of the Uskevren family and servants. I'll give a few "plus' and minus'" for each story and a basic and simple rundown of the plot. The Patriarch- The Burning Chalice by Ed Greenwood: The story revolves around Thamalon Uskevren and how he came to be the patriarch of House Uskevren along with how he stays the patriarch. Positives: *I was hard pressed to find something interesting and good about the story. The only major thing I was impressed with was setting up the rivalries between the families. Negatives: * The sudden rush of various names. It wouldn't be as bad if it was a long story but with having 15 people (I'm exaggerating a little) being introduced around the same time is just to many names. Not only that, but most of them you only see once and has a brief scene or a word or two said. * The action was all blurred together. This is the hardest thing to explain. Basically, what happens is that a person starts to do something and the action is suddenly cut away from that action to another person without even completing the first action. It was just disjointed and confusing. * The details and lack of details. It is a detailed story, however, most of the important details are left out. Instead you the descriptions don't really pertain to the overall story. 1.5/5 The Matriarch- Song of Chaos by Richard Lee Byers: The story revolves around Shamur Uskevren and her daughter Thazienne as they go to an opera. The opera takes a bad turn. The story shows a lot on Shamur's past. Positives: *The flow of the story was well done. It was a pretty quick read, but enjoyable. *I liked the use of flashbacks. I can't really go much into detail without showing a lot of the plot, but I will say that even though they may have popped up in important scenes, it made sense in the end. *Somewhat psychological aspects. I personally enjoy psychological stories. Granted it's not a thriller, but has some psychological ideas behind the story. Negatives: *The story seemed to tell a lot about Thazienne. It's not really a big negative, but the story was supposed to be focused on Shamur. Instead about 90% of the story is on Shamur and 10% on Thazienne. 4/5 The Heir- Night School by Clayton Emery: The story involves Thamalon Uskevren II (Tamlin) and the events that happen to him and his 'bodyguards' when trying to make a business meeting. Positives: *The dialogue. Most of it was funny and enjoyable to read. Tamlin's laziness and general stupidity in some matters were hilarious. *The main characters. I enjoyed Tamlin, Escevar, and Vox. Tamlin was a funny little flop. Escevar seemed more real and grounded of the three. Vox was interesting even though he didn't say anything. Negatives: *Slow t

Published by Thriftbooks.com User , 13 years ago
To all Forgotten Realms fans, this is a great series. To all those who want to read Forgotten Realms books, this series should be one of the first that you read, starting with R.A. Salvatore's Drizzt trilogy's, then moving on to this series. The 7 book series outlines each member of the Uskreven family, in a region of the Forgotten Realms that is rarely written about. Follow this series up with the Erevis Cale trilogy to see the much hinted about yet ever elusive butler for the Uskreven's, as that trilogy is the finale.

Published by Thriftbooks.com User , 13 years ago
This one is a collection of short stories, each centered around a member of the Uskevren Family. The short about Erevis Cale is the start of two trilogies about this fellow.

Published by Thriftbooks.com User , 14 years ago
This book is not your typical fantasy novel. It is the first book of the excellent Sembia series consisting of seven stories, each about different characters in a noble household. I don't normally like short stories, but in this case it worked surprisingly well. There is a consistency among the stories, giving the novel a more structured feel, and most of the stories with a couple of exceptions are four to five star tales. 1. THE PATRIARCH - "The Burning Chalice" by Ed Greenwood By far the worst story in the book. It thows way too many names at you way too quickly, and all of the characters in the book seem flat and poorly drawn. Feels like impromptu trash. ** 2. THE MATRIARCH - "Song of Chaos" by Richard Lee Byers Fairly interesting but very strange. This story does an excellent job of telling a character's past in the present, and displays an interesting relationship between Uskevren matriarch Shamur and her daughter Thazienne. **** 3. THE HEIR - "Night School" by Clayton Emery A decent but not great story. The main character is an annoying fop who succeeded in making my head hurt with his annoying lines such as "jolly good!" and such. The plot itself was rather weak, but despite these flaws I found it mildy entertaining. *** 4. THE DAUGHTER - "The Price" by Voronica Whitney-Robinson One of my favorite stories about one of my favorite characters, this one gets a 4 star only because of its rather slow beginning. I liked the author's writing style and find Tazi very interesting. **** 5. THE SECOND SON - "Thirty Days" by Dave Gross An outstanding tale about the second son of the Uskevren family who gets a not-so-mysterious disease from some creature on a hunting trip gone haywire. The disease is "not-so-mysterious" thanks to the picture preceeding it showing the main character as a werewolf, but that wasn't the author's fault. Other than the picture, a great read. ***** 6. THE BUTLER - "Resurrection" by Paul S. Kemp The absolute best story and character in the book, Resurrection is the tale about the amazingly interesting and multi-dimensional butler, Erevis Cale. Wonderful action, characterization, and an excellent plot are all packed neatly into this short little story. This tale alone is worth the price of the book. Truly outstanding! ***** 7. THE MAID - "Skin Deep" by Lisa Smedman This and Greenwood's story are certainly the worst in the novel, though this one is not nearly as awful. A rather uninteresting character and dull plot war with the above average imagination of this writer to produce a 3 star tale that was brimming with potential but not quite up to the level of the other 5 stories. *** Overall, this is a great novel, and if you are looking for a good fantasy/Forgotten Realms series, this is a great place to start.

Published by Thriftbooks.com User , 14 years ago
1. The Patriarch: The Burning Chalice, by Ed Greenwood. Much more cohesion and much less cliché than in your average Greenwood story. Deals more with the history of the Uskreven, than with Thamalon's character. Nothing special, but does the job. *** 2. The Matriarch: Song of Chaos by Richard Lee Byers. A good story by Byers. Highly magical, with a detailed insight in Shamur's background, and her relation with her daughter, Thazienne. A short story written in a way it should be. **** 3. The Heir: Night School by Clayton Emery. A good description of an interesting character, Thamalon Uskreven the Second, or "Deuce". This story is all about that. Otherwise, some nice humor and a weak plot. **** 4. The Daughter: The Price by Voronica Whitney Robinson. Uninteresting and sort of forced. The story, to be honest, does describe the main character in detail, but that doesn't make her (the main character) any less annoying.** 5. The Second Son: Thirty Days by Dave Gross. A very good story by Gross. Rich, detailed writing, well conceived plot and interesting characters. **** 6. The Butler: Resurrection by Paul S. Kemp. The jewel story of the book. I won't berate much about this one. Just read it and meet Mr. Erevis Cale. ***** 7. The Maid: Skin Deep by Lisa Smedman. A story that really had potential. A good plot and fairly interesting characters, marred with a great bit of naivety. *** I must add that all of the stories deal with backgrounds and histories of their respective main characters, which is a good thing in my opinion. Don't expect grand plots and twists, but seven stories about seven more or less interesting characters. Check it out.
Copyright © 2022 Thriftbooks.com Terms of Use | Privacy Policy | Do Not Sell My Personal Information | Accessibility Statement
ThriftBooks® and the ThriftBooks® logo are registered trademarks of Thrift Books Global, LLC