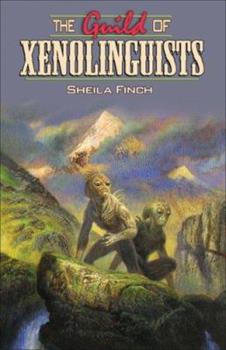 (Part of the Xenolinguist Guild Series)

In essentially all science fiction, the problems of actually talking to and understanding a new alien race are usually glossed over, by resorting to the "universal translator" or by totally ignoring any difference in language. Our own human history shows that understanding a new human race is fraught with pitfalls; how much more problematic would be meeting and greeting, let alone trading complex thoughts such as peace and war with, a totally different...

Science fiction for the science of linguistics

Published by Thriftbooks.com User , 11 years ago
I feared a plain transposition of problems that linguists encounter with aboriginal cultures on Earth into a sci-fi context with aliens, much the same way as bad science fiction uses what is exotic today to create a gimmick of future. Compared to my expectations, there is not much fiddling around with weird grammatical categories. Discovering strange linguistic features of alien languages is most of the time only a sub-element of the plot. The emphasis is rather on the technologies and methods used by xenolinguists, on the limits of the human mind, on the unspeakable in communication, and on the ethics of interpretation. If we think of science fiction as an attempt at formulating where science and technology may be taking us in the future, this book is the true science fiction of linguistics. It is also quite a feminine novel, with a higher-than-usual number of female and child characters in key roles. There are quite some clichés both in plot and in narration, but it is not disturbing in a sci-fi novel, where we do not expect literary avant-garde, just thought-provoking text written in an entertaining style. I would recommend to leave the rambling and rather useless Foreword by Ian Watson to the end, and to start the book with Sheila Finch's own much better structured and clearer Afterword. No spoilers in it (at least not more than in the Foreword), and it sets out the context just enough for the readers not to be lost when they first read about "interfacing" in the second short story. If for some reason you get bored half-way through the book, skip to the last and longest story "Reading the bones", the real highlight for me, which repeats many ideas from the previous stories, but is perhaps the best written.

I liked it just fine

Published by Thriftbooks.com User , 11 years ago
To a linguist, it's super-cool to see such good linguistics in real fiction. The universe she has created is kinda neat, and the characters are sympathetic (but tend to blur together). The stories themselves are interesting, if un-suspenseful. I enjoyed the book, and found it both intellectually stimulating and easy to digest.

Published by Thriftbooks.com User , 13 years ago
This unites the groundbreaking series Finch has been building for over two decades. If you ever wondered how hard it would be, yet how stimulating, to communicate with aliens--this is for you.

Published by Thriftbooks.com User , 13 years ago
As a conference interpreter,mainly working for international bodies, I found this book really hit the nail on the head: language, and the words that make one up, are just the first step, the key that allows you to move to the heart of the matter, communication. To communicate you need to understand the culture, the background and the mind-set of the "other", and to pass on a message or transfer a concept you must be sure you have formulated it according to the "other"'s parameters. This is what the lingsters do. Interpreters of course don't need or use drugs to "interface", after all we are dealing with terrestrial languages, but the whole concept of Alien languages and cultures is intriguing and fascinating. The lingster ethics are also spot on: confidentiality, no judgement, no personal involvement. I love science fiction in general but this book in particular: I will certainly look out for more and recommend it to colleagues. For sci fi fans who are not linguists: the book is a good read whether you are interested in languages or not.

A blend of strong plot and technological insight.

Published by Thriftbooks.com User , 14 years ago
In most science fiction novels the challenges and impossibilities of inter-species communication is overcome by the presence of a 'universal translator' - or just not mentioned. So, its intriguing to see a novel based around communication challenges - and presents a story surrounding the Guild of Xenolinguists, which helps sentient species overcome cross-communication challenges. A Guildmember is trained for years in both linguistics and culture - and these short stories center around Guild challenges and achievements, offering up detailed and complex story lines perfect for any serious science fiction collection seeking a blend of strong plot and technological insight. Diane C. Donovan California Bookwatch
Copyright © 2020 Thriftbooks.com Terms of Use | Privacy Policy | Do Not Sell My Personal Information | Accessibility Statement
ThriftBooks® and the ThriftBooks® logo are registered trademarks of Thrift Books Global, LLC