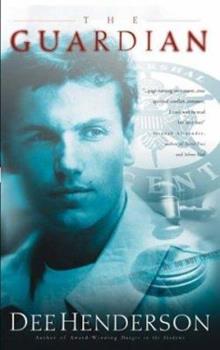 The Guardian (The O'Malley Series #2)

A federal judge has been murdered. There is only one witness, and an assassin wants her dead. U.S. Marshall Marcus O'Malley thought he knew the risks of the assignment . . . but he was wrong. Introducing the O'Malleys, an inspirational group of seven, all abandoned or orphaned as teens, who have made the choice to become a loyal and committed family. They have chosen their own surname, O'Malley, and have stood by each other through moments of joy...

Love this O'Malley series of books! Captivates you from the beginning. Dee Henderson is a great Ch

Published by Debrom , 3 years ago
Easy read but very interesting. Help anyone who has questions about God and hoe He works in our lives thru everyday living.

I can recommend this book to anyone! Dee Henderson is great!

Published by Thriftbooks.com User , 20 years ago
Suspense, action, love, humor, faith in God, excitement, mystery... these are the elements used by Dee Henderson in book 2 of the O'Malley series, "The Guardian". As I said, I can recommend this book to be read by ANYONE! It's fantastically written. The O'Malley series are about the O'Malley family. The O'Malley consists of seven brothers and sisters, three boys and four girls. Since they were little they had been in the same orphanage and when they got out of the orphanage, they decided to 'adopt' each other, taking the name O'Malley as their family name. They all have very important jobs, Marcus is a U.S. Marshal, Kate a negotiator for hostage situations, botched-up robberies, etc., Jennifer is a doctor, Jack a fireman, Rachel a trauma psychologist, and Lisa is a forensic pathologist. This story is about Marcus, the guardian of the family.U.S. Marshal Marcus O'Malley is helping with security at Chicago Jefferson Renaissance Hotel, making sure nothing goes wrong at a judicial conference. During the banquet, political speech writer Shari Hanford, stumbles into security control center by accident. There she meets Marcus and he leads her back to the ballroom. Both finding each other attractive, they set a date to have coffee the next morning. They part happily anticipating seeing each other again. Little do they know that they would see each other again sooner than they expect, under very grim circumstances.Judge Carl Whitmore, friend of the Hanford family, is unexpectedly chosen to be the next Supreme Court justice. He is murdered that very night, killed in cold blood. But the killer did not expect to have Shari open the door from the adjoining room while he is still there. He fires at her but she is saved by her brother, Josh, who pushes her out of the way. Josh is hit in the shoulder and Shari's father is shot in the chest. The killer escapes and U.S. Marshal Marcus and others must make sure he is caught and brought to justice. And one more thing, they must protect Shari because the killer wants her dead, for she saw his face. Marcus must guard Shari from danger while at the same time begins to fall in love with her. But Marcus is uncomfortable with Shari and her praying to God. He had once been a believer when he was very young and had prayed all the time. Then he had been hurt when his mother had died and didn't believe in prayer anymore. Can Shari teach Marcus to believe in God and prayer?I just loved the characters of Marcus and Shari. They are so realistic with such good characteristics such as kind, loving, trustworthy, patient, and caring. But this story just isn't about Marcus and Shari, it also involves the O'Malley's, Dave Richman (Kate O'Malley's boyfriend), and Marcus' partner, Quinn Diamond. I love the banter between Lisa O'Malley and Quinn! This book focuses on prayer and I absolutely agree with everything it says about prayer in this book. Just because God doesn't answer you doesn't mean that He's not listening. God is always ther

Published by Thriftbooks.com User , 21 years ago
Henderson's second book in the O'malley series was, in my opinion, much better than the first. Most likely because politics, judges and the law, as well as U.S. marshalls are closer to home than other topics she's written about.Here, you'll read of the oldest sibling of the O'Malley clan. When the seven orphans came together, changed their names and created their own family, Marcus became the official protector and guide for the entire group. His resulting strength and wisdom are carried over into his job as a U.S. marshall.When a federal judge is killed, Marcus takes responsibility for protecting the witness to the assassination, Shari Hanford. Through the stress of the continued threat to Shari's life, she learns to regain a hold on her life-long faith and to fall for Marcus. He, in turn, is struggling as to whether he should seek the rejected faith of his childhood.Pretty good story, with some very interesting discussions of the reasons why people lose faith when faced with the toughest times life can throw our way. Some times a little too sappy, but it does show how people are brought into your life when you need them.

Published by Thriftbooks.com User , 21 years ago
Mix an equally large quantity of suspense, intrigue and excitement until well blended, then sprinkle with romance and you will end up with a page turning thriller. This is obviously what Dee Henderson has done in 'The Guardian' to turn out the brilliantly written second book in the O'Malley series. As a huge fan of D.H., I have enjoyed all the books I have read of hers. Right from the start you NEED to know what happens next. I love the strong personalities and the way they interact with one another. The way she introduces new characters into the story and ultimately into the O'Malley clan is so good. I thought the message about prayer was brought into the story really well and watching Marcus learn to trust in Jesus again was beautiful to watch. The only part I hate is waiting for the next book!! Thanks Dee. Your books are very much appreciated.

Published by Thriftbooks.com User , 21 years ago
Marcus O'Malley is used to being the guardian of his family. When Shari Handford witnesses the brutal killing of a US Supreme Court Justice, it falls to Marcus to protect her life. Instinctively, Marcus enfolds Shari under his protective wing and finds himself admiring her more everyday. There's just one problem. Shari has been targeted by one of the best assassins in the world. What happens next is a story full of danger, intrigue and Dee Henderson's trademark suspense. Shari and Marcus are fighting to survive and to see justice served. At the same time, Marcus is confronted with his past and his loss of faith in God.Dee Henderson has created a warm, caring, funny and realistic family capable of standing together through many of life's challenges.The O'Malley series has quickly become one of my favorites. Once you're hooked, it's almost impossible to wait for the next release. I'm on pins and needles waiting for The Truth Seeker!
Trustpilot
Copyright © 2022 Thriftbooks.com Terms of Use | Privacy Policy | Do Not Sell or Share My Personal Information | Accessibility Statement
ThriftBooks® and the ThriftBooks® logo are registered trademarks of Thrift Books Global, LLC