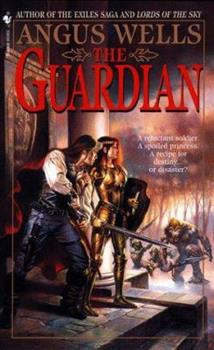 When the king is slain in battle, the kingdom of Chaldor is left in the hands of the spoiled princess Ellyn, and her guardian, Gailard, as well as the mysterious sorceress Shara, must take Chaldor back from enemies before Ellyn's rivalry with Shara divides them.

Published by Thriftbooks.com User , 16 years ago
This is a good fantasy tale. Nothing really new in the story, but the writing is very solid. While I think Angus Wells has written better more original stories, this one reminded me a great deal of a David Gemmell book. I think it is worth a look.

This one kept me up late.

Published by Thriftbooks.com User , 20 years ago
The Queen of Chaldor foresaw the death of her husband in battle. Aided by an evil Vachyn sorcerer, Talon would conquer the castle. She gave the region's fiercest warrior, Gailard (a Highlander), the task of spiriting Princess Ellyn away and guarding her with his life until such time Ellyn was old enough to gain her hereditary powers, defeat Talon, and regain the throne. Gailard and Ellyn had no love for each other. With Ellyn at the awkward age between child and woman, she had no understanding of the burdens of commanding armies, politics, magic, and zero patience. They gain an unlikely ally in Shara, another Vachyn. Shara promises to teach Ellyn the magic while Gailard teaches the princess how to battle in combat. Then, somehow, they must raise an army, defeat the mighty sorcerer, kill Talon, and regain the kingdom.It sounded like fun!***** An excellent Fantasy book! This one will keep its readers up well into the night. Non-stop, I hardly had time to breathe, much less, do anything in reality. Order out for pizza and settle in for a fantastic tale! *****

Published by Thriftbooks.com User , 20 years ago
The characters did fall in love a bit too quick but I really enjoyed this book. I am young and do not enjoy reading much but I actually enjoyed reading this book and spent my free time on it (no school project or anything). I thought this book was great and I think that young people would enjoy this book because of its setting and theme.

Published by Thriftbooks.com User , 21 years ago
I thought this book was exciting. I was caught up in the book in the second chapter when Gailard swore to protect Ellyn, even though neither of them liked each other. It was fast paced and had a lot of action and character conflicts. True, the characters did fall in love quickly, but that was its only major flaw, but I don't think its a bad one!! Read it for yourself to decide if you like it or not!!
Copyright © 2020 Thriftbooks.com Terms of Use | Privacy Policy | Do Not Sell My Personal Information | Accessibility Statement
ThriftBooks® and the ThriftBooks® logo are registered trademarks of Thrift Books Global, LLC