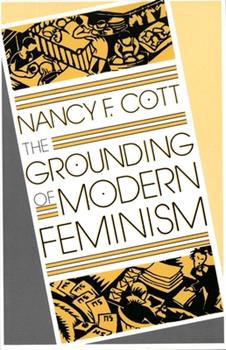 The Grounding of Modern Feminism

"The time has come to define feminism; it is no longer possible to ignore it." The Century Magazine, 1914 In this landmark addition to scholarship, Nancy F. Cott, author of The Bonds of Womanhood, offers a new interpretation of American feminism during the early decades of this century--a period traditionally viewed as on in which women won the right to vote and then lost interest in feminist issues. Cott argues instead that his period was a time...

Published by Thriftbooks.com User , 20 years ago
I consider myself to be a feminist, and I am glad to see that a book such as this exists. Cott gives a thorough and detailed account about the origins of the modern feminist movement. It is direct and to the point, and gives people a simple step-by-step telling of what is meant to be a feminist in the modern era. Anyone who is interested in modern women's history must read this book!

Published by Thriftbooks.com User , 21 years ago
This book aptly describes the problems that arose within the women's movement post-suffrage and pre-second wave. The conflicts over which issues should be stressed, and the inevitable collapse of the movement once they reached the goal that they thought would bring them equality on many levels - and the impact that the realization that the vote was not the panacea for all ills, make this book a must read for those interested in twentieth-century women's history. Should be on every feminist and/or historians bookshelf.
Copyright © 2020 Thriftbooks.com Terms of Use | Privacy Policy | Do Not Sell My Personal Information | Accessibility Statement
ThriftBooks® and the ThriftBooks® logo are registered trademarks of Thrift Books Global, LLC