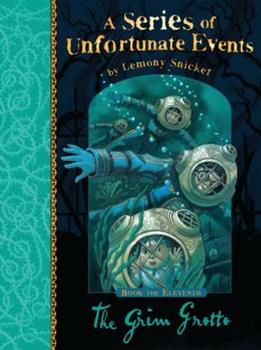 (Book #11 in the A Series of Unfortunate Events Series)

NOW A NETFLIX ORIGINAL SERIESWarning: Your day will become very dark--and possibly damp--if you read this book.Plan to spend this spring in hiding. Lemony Snicket is back with the eleventh book in his... This description may be from another edition of this product.

Not as listed condition

Published by Amanda , 1 year ago
It was listed as “very good condition”. When I just opened it there is crayon scribbles all over inside the book. Very dissatisfied.

Out of the Dark

Published by Thriftbooks.com User , 17 years ago
In Lemony Snicket's eleventh novel, The Grim Grotto, we find our three least fortunate characters weaving their way through the various impediments ahead of them on their long, treacherous journey to find the sugar bowl, their lost friend, or anywhere that they could go to escape the evil clutches of the villainous troupe of misfits. I was highly impressed with this novel's overall quality. As every series author knows, the biggest challenge is trying to make the next book more exciting and inventive then the last. Snicket clearly conquers this objective in The Grim Grotto. Never have I read a book that I would rather almost wet my pants then leave the middle of a chapter. In my opinion, the reason this book is so widely read and cherished by young adults of all ages is because almost everyone who reads them relates to the characters in some way. Not as far to being orphaned by a menacing fire or being hunted for your families fortune by a troupe of sadistic actors, but the emotions of depression, separation, and the bonding relationship of siblings is felt by all people of all ages. Violet, being the eldest Baudelaire, constantly finds herself in positions to make decisions and to generally conduct the behaviors of her other siblings. I too find myself in positions to take the lead and direct my siblings out of uncomfortable situations. When found standing in a very dark dank grotto such as the Baudelaire children were, it is easy to give up or to admit that there is no light to be found at the end of their tunnel of broken dreams. Yet this conclusion was set apart to me from the other ten previous endings. While nearing the finish of this novel I felt as if there had been a small wisp of light at the end of their tunnel that could possibly reveal a more positive direction to lead the Baudelaires out of the dark. This novel was enticing and inventive. The reference of classical poetry was a nice addition for the novel's older readers. Overall, I feel I have gained a lot from The Grim Grotto. I have attained both the ability to treat the infection of the Medusoid Mycelium's deadly spores and the strength to grip my bladder for extended periods of time. Isn't the point of writing a book to give contribute something to your reader?

Published by Thriftbooks.com User , 17 years ago
"Book the Eleventh" in "A Series of Unfortunate Events" by Lemony Snicket is all wet and dripping with further dismal tales of the lives of the Baudelaire orphans. Of course, in the usual Lemony Snicket fashion, the sad tales are told in such a funny way that the book becomes hilarious instead of being depressing like he claims it is supposed to be. "Grim Grotto" is the longest book in the series, but if readers can get past the dreary descriptions of the water cycle - meant to lull them into a catatonic state so they won't continue reading the depressing tale - they will be greatly rewarded. The story picks up with Violet, Sunny, and Klaus rushing down the Stricken Stream in a toboggan, just where we left them at the end of Book the Tenth. But the orphans escape peril for the moment when they are saved by a submarine called the Queequeg. "The submarine Q with its crew of two," is manned by Captain Widdershins, a colorful character who ends all of his sentences with a resounding "Aye," and his stepdaughter, Fiona, a bright young teenager with an over-zealous interest in fungus. This new installment of the unfortunate events of the Baudelaire children includes a number of underwater adventures including a run-in with that ever-present villain, Captain Olaf, and his band of miscreants, a trip to an underwater cave, a budding romance, and the reemergence of characters that were long gone. It's an exciting tale that will definitely attract the loyal followers of the series. However, Snicket (who is really writer Daniel Handler) also includes flashbacks that will help those readers who have not been so faithful in keeping up with every volume. The "Grim Grotto" is definitely gratifying to those who have been waiting to know what happens next in the Baudelaire's. However, if they can get through all the warnings not to finish the book, they will be no closer to discovering the mystery of V.F.D or the sugar bowl then they were before. This inability of "Book the Eleventh" to answer any questions formed by previous volumes leads to questions about whether or not all the loose ends will be able to be tied up in the remaining two books of the series. But however grim the "Grim Grotto" proclaims to be, the subtle humor will prevent anyone's spirit from being dampened.

Published by Thriftbooks.com User , 17 years ago
I highly recommend this book to readers of the previous ten books! While this book is longer than the others (and has some slow areas), the story is full of surprises - interesting locations, dreadful happenings, etc. Count Olaf and his evil minions are still after the Baudelaire children, but Olaf has definitely changed. He doesn't seem nearly as evil as he was in past and he now has the most awful laugh which just about drove me crazy (perhaps this was intended???). There are also changes in the Baudelaires - the children are growing up. Sunny is no longer a baby and has become a very interesting character. The older sibs have more issues to face, including conflicts with each other. We receive more clues about VFD and characters from previous books show up - and not everyone is quite as they have appeared in past. I found more to laugh about in this book and the ending is probably the best so far. Don't get me wrong - there are still so many miserable, horrible, mysterious things - we will have to read the next two books to (hopefully) get all our questions answered. I, for one, can't wait! A note to those who haven't already read books 1 - 10. If possible, try to read all the books in order prior to reading this book. Each book builds on the previous one and so many references are made to past books, you won't understand the story very well - heck, it is hard enough for those who have read them in order to follow, because there is so much time in between books! Also, this is not a "happy ending" series of books. While I think they are fantastic and my son loves them, I urge parents to read the books first before deciding if they are appropriate for their younger readers.

Published by Thriftbooks.com User , 18 years ago
Lemony Snicket has done it once again. "The Series of Unfortunate Events" consistently gets better as the series continues; even though that seems like a paradox. Picking up exactly where Book the Tenth left off, the reader is immediately swept up into the unfortunate affiars of the Baudelaire orphans. "The Grim Grotto" finds them boarding a submarine in order to try to find a mysterious VFD relic, ward off poisonous mushrooms, and once again escape from the clutches of the villainous Count Olaf. This chronicle introduces three "new" characters, (and the return of a few previous ones) equally annoying and prone to disappoint the hopes of our three orphans. And Count Olaf's treacherous schemes seem much more ridiculous than horrifying, but his hem-haws are as delighful to read as always. "The Grim Grotto" is a delightful addition to the "Unfortunate" series. Once again, the reader is left with a cliffhanger of an ending that leaves us dying for Book the Twelfth. Even if we know not to expect it to be happy.

Published by Thriftbooks.com User , 18 years ago
The Baudelaire orphans continue their miserable adventures in the newest book in A Series of Unfortunate Events. When the story begins, they find themselves trapped on a floating toboggan in the middle of the Stricken Stream. Eventually, they are washed downstream to the sea, where they encounter a submarine, the Queequeg, and its crew: Captain Widdershins, who is extremely fond of saying the word "aye"; his stepdaughter Fiona, who loves to read about mushrooms; and Phil, the cook, who they met long ago during their time at the Lucky Smells Lumbermill. Captain Widdershins is searching for the lost sugar bowl, determined that it will not fall into the hands of Count Olaf and his evil associates, and so Baudelaires and their new friends head off to the Gorgonian Grotto, where even more misfortune awaits them. Fans of the series will not want to miss this latest addition. It's just as miserable, hilarious, and wonderful as the previous books in the series. I cannot wait until the next book in the series is released.
Trustpilot
Copyright © 2022 Thriftbooks.com Terms of Use | Privacy Policy | Do Not Sell or Share My Personal Information | Accessibility Statement
ThriftBooks® and the ThriftBooks® logo are registered trademarks of Thrift Books Global, LLC