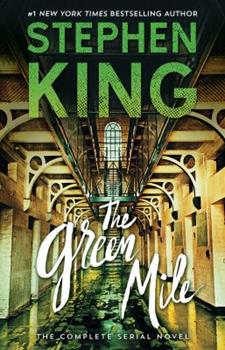 (Part of the The Green Mile Series)

I intentionally never buy any books below very good condition. The latest book I bought looks like i

Published by Morgan , 1 year ago
This book has a corner missing on the spine from what looks like something eating it. It is also really dirty. I will not be buying from Thriftboks anymore since this is the second time I have paid extra for a condition that was below what I asked for.

Published by ggoblingg , 1 year ago
“Acceptable” came with lots of water damage and what looks like some mildew growth

Published by Horror crazy , 1 year ago
While Stephen King’s horror novels are usually some of my favorite books to read, I’ve also found as much pleasure in reading his straight novels like The Green Mile. That’s right, I said it! I don’t know why both fans and publishers are suddenly so eager to categorize EVERYTHING King writes as horror! Unfortunately, I DO know why I believe many fans feel this way about his books. I’ve never found any new editions of Different Seasons for sale in any stores, but I’ve seen it for sale online. The new editions, in my opinion, absolutely present the book as a horror collection when the only horror story in the entire book is The Breathing Method! If publishers really ARE trying to make an anthology that features almost NO horror stories look like a horror anthology simply because of who the author is, shame on them! For fans who want to see The Green Mile as a horror story, that’s your choice. I don’t. I see The Green Mile as a book about redemption, faith, and hope. That makes this supernatural journey too beautiful to be a horror story, although it features a few elements, with one of the strongest examples being the fact that John Coffey, the main character, possesses supernatural powers. I read The Green Mile as a serial, not unlike many readers who grew up in the 90s, even though the first time I read it was sometime during the past decade. I knew that it had already been available as a single volume for years by that time, but I had already received the serial installments as a gift, so I just decided to read it that way. It certainly would have been easier to look for the book as a single volume. Thanks to the fact that I loved the book when I read it, I certainly intend to collect it as a single volume! Page for page, this was a wonderful read, powerful, haunting, sad, uplifting, intriguing, suspenseful, moving, touching, and scary, all in one relentlessly entertaining package(or six!) I saw the movie first, but not surprisingly, the book was far better! Trust me, though, I highly recommend both the book AND the movie! Simply superb entertainment!

Love the book hate the condition it came as.

Published by Lindsay , 2 years ago
When In "good" condition means pages are ripped out.

Stephen King is my favorite author at present.

Published by janet , 2 years ago
I grew into Stephen King books and have read him since he first came out. I like his style of writing. You never get bored, you always have interesting plots in every paragraph. Most of all, I am glad that his scary-ness usually has a point to it more than just making you shiver. Many of his stories are not gory- scary and this is one. So if you have never read Stephen King this a good one to start with. I just had to have a copy to add to my collection. A good book from an excellent writer.

Published by Thriftbooks.com User , 16 years ago
I count myself as a "dispassionate King fan". By that I mean I have read the majority of his works and find his efforts uneven. Great work such as The Stand and The Shining is offset by the occasional abomination The Tommy Knockers (which he admitted to writing while stoned) and, recently, The Colorado Kid. With King you are never sure what you will get---genius or hackneyed tripe. King is a master of characterization and setting a hypnotic mood, which often overwhelms plot and theme. He tends to take the novel's open-ended format and drones on-and-on with superfluous minutia. King is successful when the work's format imposes discipline upon his work. His short stories and novellas tend to be consistently better than his mega-tomes. The Green Mile created the ideal structure for King. Originally released in six monthly serialized segments, each month forced King to create a logical ebb and flow in the action building to natural and satisfying crescendos. Why this is important is that it brought to the forefront King's exceptional abilities of characterization in a work about the human condition. The characters in The Green Mile were some of the most vividly drawn in all literature. The stereotypical cruel prison guard was supplanted by the compassion of the main character and head guard Paul Edgecombe. The prisoners likewise presented a mosaic of humanity that added to the story's rich texture--the lost soul Eduard Delacroix, the demonic William "Wild Bill" Wharton, and the messianic John Coffey (J.C. get it?). This book has it all: depravity and redemption, compassion and cruelty, dignity and sadism. It is a true tour-de-force, undoubtedly King's best, and destined to be enshrined as one of the Great American Novels. A must read!

A magnetic book with a deeply involving story

Published by Thriftbooks.com User , 22 years ago
Is John Coffey a Murderer? As the large man is admitted to Death Row at Cold Mountain Penitentiary saying, "I tried to take it back, but it was too late," that is question Paul Edgecombe, head of security, must ask himself.After some investigation, and with the help of Eduard Delecroix, a convicted murderer, and his pet mouse Mr. Jingles, Paul discovers the truth and is forced to make the most difficult decision of his life. Along the way, William "Billy the Kid" Wharton comes to the Green Mile (so named for its lime carpeting) and shakes things up, just adding to the trouble caused by Percy Wetmore, the antagonistic rookie guard.The book is told in first person and six parts, as Paul Edgecombe recounts the events and carries on a simultaneous present tense story. I liked the book it has realistic dialogue as well as a down-to-earth view during the Great Depression, and the way it was written in parts gives it a unique feel. The Green Mile, by Stephen King, is definately worth the read.

Published by Thriftbooks.com User , 22 years ago
This book is an old man's (Paul Edgecomb - the head prison guard at Cell Block E), recollection of events that occurred in 1932 at the Cold Mountain State Penitentiary. In particular, it focuses on John Coffey, a convicted murderer and rapist of two small girls, convicted murder and psychopath William (Billy the Kid) Wharton and convicted murder Delacroix. And a mouse by the name of "Mr. Jingles". It is the story of a special gift which one of these prisoners possesses, one that none of us would probably want.King has produced a profoundly moving story and I assure you, the last fifty pages of this book will be read through tear-filled eyes.The characters and story are memorable; the lessons and messages are clear.I absolutely loved this book...I think you will too! (Let's all hope Hollywood does a good job with it) Most highly recommended!

The Green Mile Mentions in Our Blog