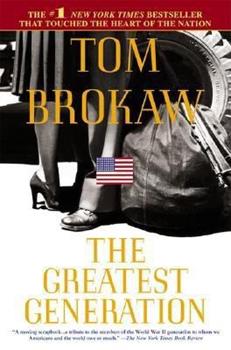 This description may be from another edition of this product. The instant classic that changed the way we saw World War II and an entire generation of Americans, from the beloved journalist whose own iconic career has lasted more than fifty years. In this...

Published by Colton , 7 months ago
They sent me the completely wrong book instead of getting what I had ordered they sent me an animorphs book I don't even know what that is. Very disappointed.

An Impressive and Moving Story

Published by Thriftbooks.com User , 20 years ago
This very moving book teaches more lessons than I can include in one review. By now most readers probably already know the basic theme - it's the story of a number of representatives of the generation that lived through the depression, fought World War II, and built post-war America. Many of the stories will bring tears to your eyes and make you recognize how far we have fallen from the standard of sacrifice and non-whining patriotism that these people took for granted as standards to live by. But perhaps I can point out an additional, less-commented-on lesson from the book: Despite the consistent themes of responsibility and duty which underlie almost every account, these people were far more diverse than we today have given them credit for. They were not monolithically conservative, worshipers of the Establishment, traditionally religious, obsessed with making money, conformist gray-flannel people with 2.6 kids and a stay-at-home mom in each family. For example, when the Viet Nam war and the associated 60s protests arrived, the reactions and tolerance levels of these people varied widely. Their values and lifestyles were about as diverse as those we find in our new century. The one clear difference between that generation and subsequent ones can be summed up in two words: no whining. In the entire book, I don't recall a single individual even mentioning the word "rights" as they applied to himself or herself. No one believed that he or she was entitled to special privileges or to live at the expense of anyone else. No one expected the world to be fair. They took the world as they found it, and made the best of it. The only failure that the Greatest Generation can be charged with is that they were so successful in building a society where everything came easily. That in turn gave rise to the generations of adult brats who gave this book negative reviews because they couldn't believe some of the UNsolved problems could have been so hard to solve. The life of ease bequeathed to us by the Greatest Generation has obscured the natural hardships of life that made loyalty and hard work a necessary trait for survival. People now have the luxury of sitting back and leisurely lecturing their forebears on how THEY would have done everything better. When we hear (or read) such nonsense, I don't know whether the proper reaction is to laugh condescendingly or to throw up.

Published by Thriftbooks.com User , 21 years ago
I am only 17, but my Grandfather fought in WWII. A book like this is very rare. As I have learned it's very hard for veterans to talk about their experiences. And, yes, this generation is slipping away from us and to have thier experiences written down for other, future generations to read is wonderful.

A legacy to our children

Published by Thriftbooks.com User , 21 years ago
I bought this book for my children. I am so thankful that someone told this story. This Greatest Generation is slowly slipping away. I am a baby boomer and my father [their grandfather] was an Italian immigrant. He was very aware of the freedom he enjoyed in this country and was willing to fight against the tyrrany of a very sick dictator! Their other grandfather fought at Pearl Harbor. Their future wives worked hard here at home for the war effort. Both men thankfully survived to go on and help rebuild this country where their families could grow up safely and with more opportunities than they knew. These dear family members have now passed on. I wanted my children to understand what their grandparents endured and to be very proud of the unselfishness of that Greatest Generation. They didn't have state-of-the-art everything, but they had loyalty, integrity, determination and grit that far overshadowed any doubts or fears. Their example of selflessness was an honorable trait. We should all strive to emulate their noble character.

A poignant and moving example of what we have lost

Published by Thriftbooks.com User , 21 years ago
This incredible book made me take a good long look at myself and my generation, known as Generation X. Tom Brokaw's re-introduction of the aptly named "Greatest Generation" to us young people was long overdue. If only the teenagers today could understand what our Grandparents did for all of us. As I have just really found out. I read this book voraciously, and found myself in tears, but could never put it down. As a matter of fact, I felt that twinge of sadness as I found myself at the last page. I am purchasing three more copies to send to my younger cousins. I hope they get as much from it as I did. An incredible book, which will send me into the new millenium with a greater understanding of how America has changed in a mere 60 years.

An excellant study on the generation that saved humanity

Published by Thriftbooks.com User , 21 years ago
As a baby boomer I have greatly bennificated from the sacrifaces of the World War II generation. Coming of age during the Great Depression and going straight into the bloodiest war in history,this generation had every right to turn its back on everything. Instead,after beating Nazi Germany and Japan they built a strong economy,laid the basis for the 40 year victory in the Cold War,and now in retirement,they continue to do public service. I hate to think what would have happened if this would have fallen on my generation. THANKS TO THE WORLD WAR II GENERATION FOR EVERYTHING WE HAVE TODAY.
Copyright © 2020 Thriftbooks.com Terms of Use | Privacy Policy | Do Not Sell My Personal Information | Accessibility Statement
ThriftBooks® and the ThriftBooks® logo are registered trademarks of Thrift Books Global, LLC