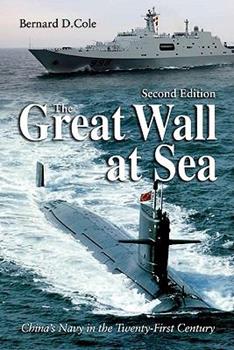 The Great Wall at Sea, Second Edition: China's Navy in the Twenty-First Century

Bernard Cole takes a comprehensive look at China's Navy, a Navy that continues to grow while the U.S. Navy shrinks. Of particular note, according to the author, is Beijing's increased attention to guarding its vital sea lanes because of the nation's growing dependence on maritime trade, especially energy supplies. He provides a thorough description of China's naval establishment, including its personnel system, followed by a detailed view of its ships,...

Good, Brief Intro to China's Navy - Could Have Been Better

Published by Thriftbooks.com User , 13 years ago
The Great Wall at Sea is on balance a decent introduction to the modern Chinese Navy that is geared more towards breadth than depth. It tries to put the current state of the Navy in a historical context, and explains briefly training, recruiting, personnel administration, fleet organization, systems, the maritime interests of the Chinese (as best it can), and fleet exercises. This provides a lot of fundamental, basic information which is a solid foundation for understanding the Chinese Navy, but in and of itself does not go far enough to deliver any such in depth knowledge of it or any elegant analytical conclusions of intentions. One draws several major impressions of the Chinese Navy - It is becoming increasingly technically oriented, and at a fast pace, especially with regards to its manning and training. However it still has a long way to go and its Soviet model fleet structure, with each fleet having it's own training commands and systems, makes progress uneven and relatively uncoordinated. - The Chinese Navy evolved from the Mao-era coastal defense force into a "green water" Navy, i.e. one capable of projecting power several hundred miles beyond it's own shoreline but not across the world the way practically only the US Navy can anymore. - It is divided into three fleets which are practically their own Navies. One geared towards the Korea/Japan region (which is getting the most advanced destroyers), one geared towards Taiwan (which is sub-intensive), and one geared towards the South China Sea, which is where the amphibious forces are located. From this force structure the author cautiously deduces that China is strategically more worried about physically seizing the Spratley Islands and other nearby chains to secure a source of reliable oil, as they claim these are their territorial lands (based on a convoluted and not traditionally accepted worldwide definition of the continental shelf belonging to their country and not the 12 mile offshore standard). The fear of a surface action is against the modernizing South Korean and extremely capable Japanese navy, whereas the Taiwan strategy appears to be based on sea denial using submarines rather than amphibious invasion. The author knows he is on tenuous ground making these assertions about strategy from force structure (usually you go the other way around, build a force structure from strategy but you can "invert" the problem to try to figure out your enemy, but it's not a one-to-one correlation, one force structure can be the result of multiple strategies.) For example, it wouldn't be physically difficult for the South Sea fleet's amphibious forces to swing north to invade Taiwan, even though it's in another fleet's AOR. - The Chinese have strategic maritime interests in securing sources of oil, but little ability to currently protect sea-lanes from the Persian Gulf to their own shores. They are however laying the groundwork for such a capability with ties to countries al

Great Book, Hope that it will be Updated

Published by Thriftbooks.com User , 14 years ago
Capt. Cole does a great job boiling several decades China's naval strategy down into a few hundred pages. The book is both broad and deep, but not overwhelming. Unfortunately the book has not been updated since it was written in 2001, much has changed in almost a decade as China plan to update its military is moving at breakneck pace. This book is the place to start if your want to understand what makes China's PLAN tick, but it is not a final resting point. Read this book, and then hit the library; it will teach you what questions you have to ask, and at the pace that China is moving, you will have to re-ask these questions every few months, because the answers are changing. If Dr. Cole (he also has a PhD) has the time to update this book, I will buy it again.

Published by Thriftbooks.com User , 14 years ago
CAPT Cole's text performs what any survey ought to do: it provides information that is broad but not too deep. If you know nothing about the PLAN, this is the book with which to start. Structure, equipment, doctrine, and prospects are all ably covered. While one may question one or two conclusions about the likely future of either the PLAN's capabilities or its relative strength, it must be remembered that this book is six years old; with a subject as dynamic as the growth and change within the PLAN, it is impressive that CAPT Cole's text has remained as relevant as it is. Highly recommended for the new and curious.
Copyright © 2020 Thriftbooks.com Terms of Use | Privacy Policy | Do Not Sell My Personal Information | Accessibility Statement
ThriftBooks® and the ThriftBooks® logo are registered trademarks of Thrift Books Global, LLC