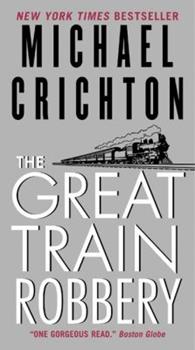 One of Crichton's classic thrillers--the New York Times bestseller which was the basis for the 1979 film adapted and directed by the author--is reissued with a new look. In 1855 London, a group of thieves plan a daring robbery of gold bullion cargo aboard a mighty steam locomotive as it speeds along the English countryside. Reissue.

Published by Thriftbooks.com User , 14 years ago
Edward Pierce is a gentleman rogue, a man perfectly suited to Queen Victoria's England. He's as clever as Sherlock Holmes, but he puts his wits to work at committing crimes instead of solving them. In this time and place where railway travel is relatively new, he targets a London bank's regular shipments of gold bullion - by rail, and by sea - to Paris, and sets about planning and arranging a heist that will give him fabulous wealth for the rest of his days. Michael Crichton's technothrillers, as much as I enjoy them, often suffer from wooden characters. This book most definitely does not. Pierce, the surprisingly (sometimes infuriatingly) engaging hero/villian, is beautifully written; and the cast of characters surrounding him comes colorfully alive, even for those who play relatively minor roles. The dialog written in dialect and the wealth of historical and cultural detail add texture, and the plot works well; but it's the characters that make this story such a pleasure to read.

Published by Thriftbooks.com User , 14 years ago
Crichton's writing skills are truly amazing. After you read other books written by this famous author, you will not believe that this book has been written by him. The reason that I say this, is because when I started reading the first few pages, I thought I had ordered the wrong book. With an old English writing style, you will be amazed at how he can use various different writing styles, and still produce a fantastic book. The story is exciting in its own right, but Crichton takes it to a whole new level.

Outstanding Retelling of the Legendary Caper

Published by Thriftbooks.com User , 19 years ago
Drawing heavily from court records and testimony, Chrichton's novel of historical fiction recreates the ingenious planning and execution of perhaps the most famous crime in British history. It's a novel in a very loose sense of the word, since throughout the book, Chrichton stops the proceedings to explain Victorian social customs for several pages at a time. But this is not a complaint at all, for the details on dog fighting, rats, gender roles, fear of premature burial, chimney sweeps, tipping servants, the Crimean War, safecracking, and most importantly urbanization and railroads, are all integral to the crime, and fascinating historical tidbits in their own right. Central to the entire crime is the understanding that in the 1855, there was no such thing as dynamite or other explosives, so safes really were impregnable without keys or unlimited to time to pick them. Thus, the robbery of the monthly gold shipment that traveled by rail to France to pay for the Crimean War was deemed inconceivable, as opening the safes required four keys which were held in three separate locations. However, along comes Edward Pierce, a safecracker and master con artist who wanted that gold. The book tells how using an incredible array of scams, assistants and associates, misdirection, boldness, and quick thinking, he obtains copies of the four keys and embarks on the theft of the century. Crichton does this is a fairly documentary style for the most part, however the dialogue amongst the criminals sparkles with period underworld slang (all of which he stops to explain). The story is recounted with continual reference to the trial, so its clear from the get go that the plot was successful, yet somehow the plotters were caught. Even knowing this in advance, the suspense is maintained throughout as the plotters encounter unexpected difficulties, last minute roadblocks, and increased police attention. And despite this knowledge of the trial, the ultimate outcome is shocker. I can't say how closely Chrichton adhered to the facts of the plot, but the social context of mid-19th century England he puts it in is certainly well researched and accurate. Sure to please fans of of the David Mamet films House of Games, The Spanish Prisoner, The Heist, and of course the classic George Hill movie, The Sting.

Published by Thriftbooks.com User , 21 years ago
In Victorian England, where the police are a recent innovation, and nothing is as it seems, one gentleman has a plan: rob a moving train of 12,000 pounds in gold. This man is Edward Pierce, and Michael Crichton proves his versatility by taking the reader into the dark, criminal underworld of London. The story of Pierce's planning and execution of the robbery is packed with vivid descriptions and fascinating historical facts about the period. The characters have both depth and appeal, and the plot is never dull for a moment. Written with the robber as the protagonist, the reader finds himself sympathizing with the criminals and despising the police who are out to catch Pierce. Readers of Crichton's sci-fi thrillers may be disoriented by the change of scenery, but The Great Train Robbery is an excellent novel that should appeal to anyone looking for a fast, exciting read.
Copyright © 2020 Thriftbooks.com Terms of Use | Privacy Policy | Do Not Sell My Personal Information | Accessibility Statement
ThriftBooks® and the ThriftBooks® logo are registered trademarks of Thrift Books Global, LLC