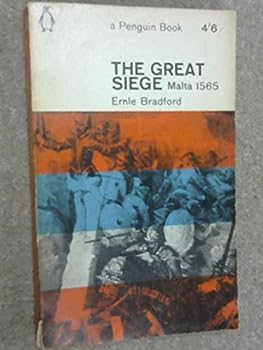 The indispensable account of the Ottoman Empire's Siege of Malta from the author of Hannibal and Gibraltar . In the first half of the sixteenth century, the Ottoman Empire was thought to be... This description may be from another edition of this product.

Published by Thriftbooks.com User , 18 years ago
In the mid 1500's the Ottoman Turk Suleiman the Magnificent was a septagenarian, but he still was the most powerful ruler in the world. He had carved out an empire in the Middle East, and he wanted to expand it into Europe.A small group of men on a miniscule island in the Mediterranean didn't exactly stand in his way, but they were a bloody nuisance. They were the Knights of St. John of the Hospital, a relic of the Crusades. Driven from the Holy Land, they had settled in Rhodes and become pirates preying on Moslem shipping. The Turks had twice beseiged Rhodes and finally driven out the pesky Knights, but the Knights took refuge on Malta and continued to be a thorn in Suleiman's flesh.Suleiman decided to destroy them, capture Malta, and use its port as a base of operations against Europe. He sent an armada and an army to do the job, and a few thousand defenders faced off against tens of thousands of invaders.The Turks decided to capture the harbor first so that their ships would have a safe haven against possible storms. A small fort called Fort St. Elmo stood in their way. They figured they could overwhelm the Fort in less than a week, occupy the harbor, and the rest of the island would soon fall to their attack.When we think of famous last stands, we think of the Alamo and Thermopylae. The Spartans withstood the Persians for 3 days at Thermopylae. The Texans withstood the Mexicans for 13 at the Alamo. Fort St. Elmo stood for an entire month before it finally succumbed. The defenders of Fort St. Elmo fought stubbornly and to the last man, enduring unimaginable hardship, and they wrought terrible slaughter on the Turks.When the fort fell, the Turks took no prisoners and mutilated the bodies of the fallen defenders. Grand Master La Vallette of the Knights responded by decapitating all his Turkish POW's and using the severed heads as cannonballs to bombard the enemy. Then the battle for Malta began in earnest, with no quarter asked and none given. The seige of Malta is a gripping tale of brutality, courage, and tenacity peopled with larger-than-life protagonists like Suleiman the Magnificent, Grand Master La Vallette, and Dragut the Barbary Coast pirate.

Published by Thriftbooks.com User , 19 years ago
An epic tale accurately told with recounting based on manuscripts and diaries of those there, interspersed with the tales from the natives, lightly spiced with the author's understanding of life at that time, so it all comes together in a fascinating true story of the Muslem forces of Suleyman the Magnificent setting out in great strength to seize the island of Malta, in order to establish a base in the western Mediterrainian, with the purpose of pushing his empire up into the underside of Europe. The island is held by The Knights of St. John, the Hospitallers, honest-to-goodness knights in shinning armour, who carry one of the hands of the disciple John with them as a divine relic. The story is Muslem against Christian, both dedicated to fight to the death, the attackers in flowing robes that caught fire easily when the defenders, who were wearing armour and chain mail in sweltering heat and sun, rolled hoops of fire into their midst. It is seige warfare, psychological warfare, religion vs religion, men vs men, and men vs germs. Polictical betrayal, bravery, heroics, bad strategys and brilliant tactics. The author has done excellent research, the core of the book is a scholarly work with references and sources, but done in such a way as to become a great story, not a boring read. Brings it all to life and death, an easy and interesting read at 232 pages of story. This is not just for military history buffs, but for anyone who likes a good story.

Published by Thriftbooks.com User , 20 years ago
First of all, I must confess to you that I normally do not read military history or battlefield stories. A book about one of the most life-changing historical events on a 122-square mile island nation in the Mediterranean Sea may be important to people on Malta, but not me. Except that I went to Malta for a vacation and was given a copy of the book by another traveler who had just finished it. "Good book," he proclaimed, so I started reading.I couldn't put the book down. I hungrily read chapter after chapter. The tale of how the Knights of St. John defended this strategically important island from the onslaught of a Turkish force was fascinating. The Turks in the 1500s were a powerful nation whose dominance spread far and wide. The Knights of St. John held the island of Malta, strategically positioned to enable the Sultan to conquer Europe. Interstingly, the clash also pitted Moslems against Christians in a struggle that even has relevance to current events.A huge force of 200 ships and 40,000 men attempted to overthrow the Knights of St. John whose force numbered about 9,600. The naval and ground battles, the heroism, the strategy, and all the stories leap off the pages. The author brings this centuries-old historical event to life, based on historical research that presents facts and figures which support the story he tells. This is a masterpiece. Yes, it should be a movie--to rival Ben Hur and a few other box office hits. It is said that to be successful, every movie must have strong characters, violence, and sex. No sex in these pages, but the strong characters and their heroic feats will hold your attention from cover to cover.Suggestion: go to a web site where you can view a map of Malta to understand the relative position of the locations described so vividly.

Published by Thriftbooks.com User , 21 years ago
I just don't know how this story has escaped the clutches of Hollywood. The Great Siege of Malta has to be one of the most amazing conflicts of military history. The might of the Ottoman Empire thrown against a miniscule band of ageing knights of the Order of St John. How could Malta ever hope to hold for even a week?Ernle Bradford gives a clear and informative account of the events of the siege, based on good research. There is no need for him to dramatise the story. This is compelling reading and a story that tells itself.If you don't know this story you have to read it. No excuses, believe me, you want to read this story. History never was as good as this in school.This book does not have five stars for nothing. Listen to me, you have to read it. (anyone would think I was on commission here).

How Did Hollywood Miss This One!

Published by Thriftbooks.com User , 22 years ago
If you like such movies as "BRAVEHEART", "BEN-HUR" and "ZULU!", this book is for you; I couldn't put it down. Although written in the early 1960's, it remains THE landmark work on the Great Siege. The author paints such incredibly vivid pictures of the principal actors, the period and the heroic battle actions that he brings the Siege to life. While the book is a bit short on specific details for the serious historian, it more than compensates for this with its crisp, almost electric pace and non-stop action. Indeed a 1999 retelling of the Siege showed clear tribute to Bradford by aping his prose, but the result was a clumsy, ham-handed effort. Stick with this one - the original - and you won't go wrong. This is storytelling at its finest. For those with a little imagination, "The Great Siege" will be the best war movie you'll never see. Whether you like fiction or history, this book is sure to please.
Trustpilot
Copyright © 2022 Thriftbooks.com Terms of Use | Privacy Policy | Do Not Sell or Share My Personal Information | Accessibility Statement
ThriftBooks® and the ThriftBooks® logo are registered trademarks of Thrift Books Global, LLC